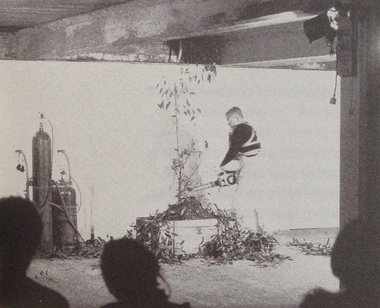 ‘Planting' as a term initially seems so generous and friendly, so community minded. What actually occurs is that a small tree in a terracotta tub, taken from a patch of native bush, is slowly dismembered by the artist with a chainsaw. A long thin trunk, four lateral branches and various twigs of leaves are carefully preserved - not cut too small but left suitable for ‘replanting'. ‘Planting' taking on the meaning of ‘to firmly place.'

Jim Allen
On Planting a Native

This Auckland recreation by Jim Allen of On Planting a Native - his performance work of 1976 in Adelaide - was part of his recent News exhibition at Lett. The work was in the tradition of Swift’s A Modest Proposal pamphlet (1729) where the author of Gulliver’s Travels sardonically suggested that a good remedy for the Irish depression would be that the peasants sell their children to be devoured by the rich. It was straight faced satire using violence to seemingly mock the tenets (in Allen’s case) of paternal colonial racism, the ‘improved’ reorganisation of a dominated culture.

‘Planting’ as a term initially seems so generous and friendly, so community minded. What actually occurred was that a small tree in a terracotta tub, taken from a patch of native bush, was slowly dismembered by the artist with a chainsaw. A long thin trunk, four lateral branches and various twigs of leaves were carefully preserved - not cut too small but left suitable for ‘planting’.

In this case ‘planting’ took on the meaning of ‘to firmly place in position’ with the violence of a blow. The ‘placing’ meant the positioning of (newly) dead botanical elements on the gallery wall, taped there to make up a sort of ‘planted’ drawing. The original severed parts were trimmed, aligned and straightened out when locked into a horizontal and perpendicular formation. The result was a new ‘tree’ with a central vertical stem and three levels of horizontal branch, each with three alternating (up and down) clumps of withered leaves.

Brown plastic tape was used for the stem and white paper tape for the branches and leaves. The two different types I think were picked for pragmatic - not symbolic - reasons: though this might be disputed.

A couple of acetylene gas welding tanks (one short, the other tall) standing on a barrow on the lefthand side of the area where Allen was performing provided an ominous mood : a sense of fiery expectation, a prop that provided ambience via allusion to burning or the joining of metal pieces, even though the equipment was never used.

How do we interpret Allen’s gesture of symbolically reconstructing an indigenous tree? Do we search for correlations between his demolished plant converted to taped up pieces reassembled on a white wall, and après-colonialist Maori and Aboriginal societies? Is there a correlation of tightly parallel meanings between New Zealand and Australia’s political events (say, their colonial histories) and these ‘gallery events’, or are the two performed actions looser, more ‘poetical’, as it were?

Curiously Allen’s use of tree as a metaphor was different from trees that featured in other works such as Hanging From a Thread II (2009) - different in meaning through related in (bandaged or damaged) treatment - or The First Three (1998-2012).

According to Allen’s introduction, spoken before the performance in Auckland started, On Planting a Native was sparked off in a taxi when he heard a cabbie decrying the alleged racism of a controversial Tony Coleing sculpture that was removed during an Adelaide arts festival. The sequential structure of actions seems to have suddenly occurred to him. An instant conception.

The work, like his other more well known solo performance News, had a Fluxus feel to it, a comparative modesty in terms of required resources. I find these ‘simpler’ mid-seventies works more appealing than for example, the group activities of other re-presented, more complex performances. As process oriented works News, Poetry for Chainsaws, and On Planting a Native have a high emotional content (histrionic even) that I admire, a barely restrained anger and vibrant immediacy communicated through physical gesture and repeated action.