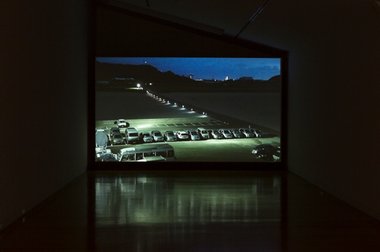 Much of the film features Japan's launching of weather-satellite bearing rockets from Tanegashima (an island that's close to Sakurajima, a smoking volcano) filmed by night and by day, with these events attracting large audiences - like rock concerts. Norrie's film starts and ends its loop with such a launch (with lots of billowing white smoke) incorporating shots of celebratory sky rockets firing star clusters into the night sky over the black water.

In its narrow upstairs gallery, Two Rooms is currently presenting Transit, a fifteen minute long Susan Norrie video originally made as an Australian contribution to the 2011 Yokohama Triennale. Norrie is well known to most older New Zealand art lovers, for everything thing she does is of immense interest. She has been making extraordinary images - in some form of other - for several decades now.

Although this film is available on Youtube it is infinitely superior as a viewing experience in a fine viewing space such as this Two Rooms venue: as an installation. You can savour the projected detail, the correct proportions of the horizontal rectangle, the improved sound quality and the easier-to-read subtitles (an interview with Yoshimaru Higa, a shaman in Okinawa.) And although parts are breathtakingly elegant - especially the night-time shots with a full moon accompanied by lanternlike ferries gliding across the harbour beside the volcano Sakurajima - the dominant mood is that of alarm about the vulnerability of our species (and other earth-dwellers) to natural or self-inflicted disasters. The lack of a musical soundtrack adds to its gravitas; there is the sentiment through the title and the interview that even if we travel to other planets we should never forget how special planet earth is. It is crucial that we care for it.

Much of the film features Japan’s launching of weather-satellite bearing rockets from Tanegashima (an island that’s close to Sakurajima) filmed by night and by day, with these events attracting large audiences - like rock concerts. Norrie’s film starts and ends its loop with such a launch (with lots of billowing white smoke) incorporating shots of celebratory sky rockets firing star clusters into the night sky over the black water.

Natural disasters are a conspicuous element in this film. There is the ominously smoking Sakurajima, belching dark clouds of ash into the sky, and unsurprisingly, the extraordinary carnage of the Sendai tsunami (March 2011) generated by the Tohoku earthquake, with the slow process of cleaning up for a rebuild just beginning. Linked to them both is the damage to the Fukushima Daiichi Nuclear Power Plant - we see a police roadblock - underlined by a small but colourful anti-nuclear protest march Norrie has filmed in a noisy city street.

Before she reinvented herself as a moving image installation artist Norrie was much admired (indeed revered) in the eighties and nineties as a prodigiously gifted painter, and as with somebody like Julian Schnabel (likewise adept at both), the painting sensibility still carries through into another medium. Not in a textural mark-making sense (as is so obvious with Schnabel) but in the various allusions to Japanese art history, especially printmaking and landscape, and an extraordinary ‘rightness’ of pictorial composition.

Her editing control is also very apparent: the impeccable alignment of one glowing ferry moving out from behind another; the playing off as foils opposite kinds (black and white) of churning smoke (a favourite Norrie motif) from spacecraft and mountain; diagonally descending lights of moving traffic on a causeway versus ascending lights of a tilted silhouetted passenger aircraft.

When you look closely at her back catalogue of film productions there are various themes that regularly reoccur: natural disasters; civic reconstruction; public protests against certain political actions (or inactions); the flow of traffic; an appreciation of nature - a wide range of ‘filmic’ topics. And as is characteristic of the mood of our time, the work has a global preoccupation, but this time suffused with the thoughts of a religious leader wondering about the planet’s future (rockets being a metaphor for mental speculation). Engrossing.