Searching for the ‘Real’ Hamilton 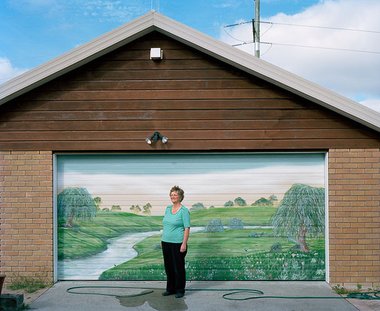 In sum, the exhibition discloses, via a number of different documentary practices, that truth can be many things: something found, observed, constructed, reconstructed, enacted, imposed, negotiated, manipulated, changing and in transition, involving a site of confiscation and repatriation. All these perspectives together play their role in the documented assemblage of what it means to be a particular city.

The words document/documentation/documentary come to us with certain inbuilt assumptions, namely that the material presented represents the truth. That that it is not quite the case has become a truism today. A whole range of factors from editing, selecting and sequencing and back, or the mere presence of the documenter, is seen as altering and influencing the outcome. They are constructs, like much else, though some New Zealand documentary makers still vehemently deny this.

Survey Hamilton, a multimedia exhibition, currently showing at the Waikato Museum, negotiates some answers to the truth question that asks: what is the nature of a certain city?

This documentary art show is a collaborative project involving the WINTEC School of Media Arts, the University of Canterbury, Massey University and independent researchers involving the employment of a range of media technologies. Project manager, Joe Citizen, tutor in Media arts at WINTEC, speaks of power relationships within society that help shape the perception of reality. To this end, acknowledging the process of manipulating the conventions of truth, (which media do), he has set up a series of monitors which depict various artistic activities filmed around the town, but with a “co-creator” approach where the documented have had a hand in the construction.

This methodology encompasses not only the filming procedure itself, but also the viewing process inside the gallery. The filming incorporated the use time lapse photography involving a six camera lens with a 360 degree field view, creating panoramic moving image sequences. The participants involved in the shooting - local artists, musicians and performers, were active contributors in the construction of the work. And the gallery viewer in the final “creative” stage is able to manipulate the imagery by recreating and stage managing the sequence, the angles and play with other manoeuvres to reconstruct the documentary ‘truth’ of this conversation with communities. Thus what is presented here with Citizen and Jason Long’s Oh Yes We Are, is a counter to the Social Realist conventions, taking one into a more pluralistic mode of documentation, a “mapping” of Hamilton linked to the metaphor of representation.

A similar construction by Simon Nicholls, called Crafting Hamilton, sees the city modelled in digital form - a virtual Hamilton, where the city becomes an ‘imaginary’ place the viewer can reform, rebuild and remodel in an interactive capacity, a kind of gaming approach to the question of reality. Paul Nelson, in Reflections, by contrast deals with the past and the memory of the city, albeit using a similar interactive mode of access. He takes the viewer on a trip through an old Hamilton homestead where the viewer, by moving the cursor, can construct their own journey into the past via the present, turning it into a non-linear documentary.

Like political pollsters, David Cook and Rodrigo Hill in Night Riders, take a sample of city night life by photographing willing patrons coming out of a central city bar - placing them inside a popup studio complete with lights and black velvet backdrop. Fifty five people of various ethnicities are captured on sequential life-size footage that presents each individual in still-shot for several seconds. Most are young, the men in casual attire - jeans and T shirts, striking macho poses - while the women are more formally dressed in predominantly short tight skirts, presenting more demure and self-conscious poses.

It becomes a sort of sociological study in itself, as is Mark Purdom’s set of digital photographs of the New Zealand Ethnic Soccer Festival, a yearly event that brings together soccer teams for a two day tournament in the city, all in a riot of colour - flags, strip, head-scarfs, face-paint - not to forget, bag-pipes. It reminds the viewer of the diversity of cultures that now make up the city. Truth is multiplicity in a time of change.

Another cultural change documented by Cook, is a historical one connected to New Zealand’s colonial past. The work is titled Reclamation: The Base, the backstory of which is the return of land to Tainui in 1995 as part of the Deed of Settlement in reparation for land seized by the Crown in the 1860’s Land Wars. The area is now a huge shopping complex managed by Tainui involving 172 stores and 2600 car parks.

It is a major commercial success story for Maori and Cook has taken four photographs of the place which focus on portraits of people in situ that come with a touch of irony. The portraits are all Pakeha, workers and shoppers, holding their purchases, two of which refer to American fast food franchises. The colonizers have been ‘colonized’ who have in turn been colonized again by outside influences. Double ironies abound. Truth becomes a moveable feast.

Cook also engages with another feature concerning a similar historical crime, now in the process of being patched up which entails another act of retrieval. It’s called Reclamation: The Forest. Waiwhakareke is the largest inland ecological restoration project in New Zealand being conducted on the outskirts of the city. It was deforested after the Land Wars, but a block of sixty hectares was purchased by Hamilton City Council in 1975 for the purposes of replanting in native bush to restore the original wetland. This has now begun in earnest with volunteer help and Cook has photographed four representative people, significantly Maori and Pakeha, of different age groups, each holding a small plant ready to dig into the soil. One of them cradles it like a child, another holds it in one hand like a trophy.

The city is in transition where the contested truth of the past meets the promised truth of the present in the hope of cultural rapprochement. Transition is also a theme touched on by Naomi Williams in her series of photographs that take in the new suburbs burgeoning in the growing city; treeless, arid and choked with tarmac and concrete, there is not a person in view, which adds to the pronounced aura of sterility that pervade these soulless sites.

By contrast, Stefanie Young has taken Hamilton parks as her focus, photographed either in the early morning or early evening where, like Williams, there’s an absence of people but instead of emptiness and vacuity, there exists a feeling of presence, of time and history, of quiet and tranquillity, capturing in the atmospheric nature of the time of day something that resembles a shot from a movie still. The truth of a city depends where and at what time you look.

Tim J Veling, from Canterbury University, looking at Hamilton through the eyes of an outsider, has chosen to photograph what might be described as the ‘real’ inhabitants of the city, seizing on a ‘truth’ perceived by some. He thus photographs accordingly, capturing cheesy images of provincial boys pumping iron in a gymnasium beneath the New Zealand flag; a group of Maori youths slumped across a stationary car parked on a state house property; a woman in a bridal outfit seemingly stranded alone at the starting line of the V8 super car track, (in good Westie fashion); a middle aged woman standing proud before her double garage door bearing a painted kitschy scene of a willow-lined river, banks scattered in cute wild flowers. Veling plays here with stereotypical notions of truth that can see a city lumbered with certain pejorative labels.

Street life of a sort occupies Mark Purdon in a small suite of photographs that concentrate on a particular stretch of road in the city which he took a forensic interest in. Over a six month period, one day each week, he collected discarded rubbish left on or near the footpath in an endeavour to ‘document’ the inhabitant life of the area, like some archaeologist keeping an archival record of human occupation. The resulting photographs are a selection of enlarged images of some of his finds - a Lotto ticket, cigarette packet, sole of a shoe and other detritus. This is the kind of truth one cannot disguise, much like the tabloid journalist or detective who rummages through the trash bins for clues to the real life of celebrities and stars.

Confluence is the last and largest work of the exhibition. A collaborative effort by Kent MacPherson and Luck McConnell, it involved mapping the subterranean sounds created by the city bridges that span the Waikato River. These were recorded using contact microphones attached to the bridges along with subaquatic hydrophone recordings that were then combined with digital constructed images, in 2D cross-section perspectives, of the bridges themselves. The sound track is linked to and interacts with the visuals, creating a ripple effect (like some heartbeat monitor) on the silhouettes of the bridges played up on the gallery wall. The surreal impression is enhanced by the use of ghostly yellow, purple and light blue colours combined with the digitalized rocking motion of the river.

This sonic art piece captures a reality no one normally hears but is indelibly part of the city humming away in the fathomable depths; another truth brought to life, uncovered and performed for the unsuspecting viewer.

In sum, the exhibition discloses, via a number of different documentary practices, that truth can be many things: something found, observed, constructed, reconstructed, enacted, imposed, negotiated, manipulated, changing and in transition, involving a site of confiscation and repatriation. All these perspectives together play their role in the documented assemblage of what it means to be a particular city.