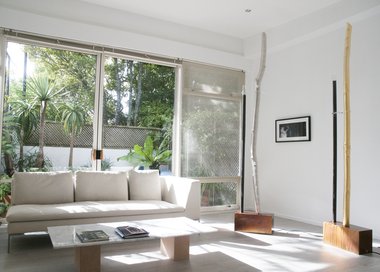 Here we see typical Drummond themes of the land and the body, exploring parallel processes between the two, using motors as a reference to the mechanics and autonomic systems of his own body, and wider still to ecosystems - drawing out global implications while showcasing his standard repertoire of symbolic materials and image themes.

In this presentation (in a gallerist’s ‘domestic’ setting) of three photographs, two freestanding kinetic sculptures, and three wall-relief sculptures, Andrew Drummond continues exploring the symbolic and ecological themes he first initiated in his pioneering performance days of the seventies, but which he then developed - beyond props - into assertive presences (as gallery or outdoor sculpture) from the mid eighties on.

Here we see typical Drummond themes of the land and the body, exploring parallel processes between the two, using motors as a reference to the mechanics and autonomic systems of his own body, and wider still to ecosystems - drawing out global implications while showcasing his standard repertoire of symbolic materials and image themes. The use (or depiction) of coal is accompanied by gold and platinum paint, glass tubes as veins for ochre light, dried sphagnum moss, copper, flowing water (photographed), beeswax, miniature pulleys and railway tracks, tiny celestial spheres, debarked willow branches and small shards of slate.

So with the three types of work we firstly have the trio of photographs taken in the West Coast of the South Island, all of which feature waterfalls cascading over chunky rocks of coal, juxtaposing two sources of energy: one is feathery in its liquidity and smooth as silk - due to a slow exposure speed - the other sometimes with sparkly flecks redolent of myriad stars in a night sky. The blurry waterfall could represent rain at night, an unrelenting nocturnal downpour. Warning of climatic shifts maybe?

With the two Rotating Limbs, one gold, the other platinum, we see sturdy willow branches, painted in metallic colours and installed vertically into copper boxes that hold motors that gradually turn them. Standing next to them are upright glass tubes holding crushed coal. The slowly spinning branches seem to represent vertical figures (like sentinels) guarding the land and perhaps in their colours calling to the sun and moon.

The finely crushed coal in the glass cylinders next to the painted branches takes what was in a horizontal vein (underground) and makes it vertical like a sort of chimney, functioning as a strange protective armature or crutch (barely touching) for the disembodied ‘limbs.’ The dark lines seem a mediation on dependency, while hinting (like the sphagnum moss seen elsewhere) at the provision of a filtering system. These tubes also reference the nearby From Washing photographic diptych with their density of shiny black starlike granules.

The other type of work features house-shaped trays with glass fronts and sprayed metal backs. These whimsical dioramas seem an obvious reference to the romantic ethos of Joseph Cornell, while the dominant house shape could reference some of the ink drawings of Louise Bourgeois but extended in meaning. Delicate willow branches inside each Consequence of Action spring out of a wax base that is covered with spongy, dry sphagnum moss, holding little slate platforms in their forks, and small pulleys bearing small balls on lines. Tiny railroad tracks lie on the floor, an unusually literal component for Drummond, overtly referring to mining.

These ‘shadowboxes’ seem an unusual direction for him, being so different in their inner-world intimacy from the massive motorised works of his Christchurch survey with its heavily industrial ambience - though they are an extension of the earlier bell jar works which contained miniature versions of his freestanding outdoor sculpture. Yet though they seem dreamy and escapist these wall reliefs are in deadly earnest. The slate platforms in the willow forks warn us of our planet’s demise, being little temporary sanctuaries we can climb up to escape continually rising water. Serious and urgent themes this artist has been exploring for decades.