A Person’s Immaturity or Youth 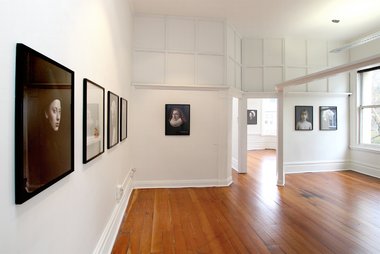 Arozqueta has not hung them chronologically. We don't watch Paula grow older. In fact it's not clear at first that it's the same person. The effect is uncanny. They are out-of-sorts in style. Whether selected by artist or curator, their appearance seems intended to cause disturbance: to make us consider more actively, beyond the silent open expression of the faces before us, the dynamics of the relationship between artist and subject.

Since the mid-1990s Dutch photographer Hendrik Kerstens has been making a project of photographing his daughter - now in her 20s. When she was prepubescent this came with possibly disturbing implications in terms of parental responsibility and consent. (They include one of her nude from the waist up - direct to camera, plain and un-sentimental. Another as an adolescent, not in the exhibition, is of her hideously sunburnt.) After adolescence (circa 2002 on) the images take on a change and a different charge. Paula (unnamed, except in the curator’s exhibition notes) is clothed and posed in take-offs of fifteenth to seventeenth century Dutch portrait paintings (Vermeer, Van Eyck and Christus are noted and clearly evident).

Through their high-elegance and the subject’s noble expression the subject here is far more elevated. But these images are also archly funny, with various domestic wipes like tea towels and toilet paper as Dutch caps and headcloths (hennins), and paper doilies as ruffs. The accoutrements of nobility constructed from around the home. There’s still a tension of course - would you dress your daughter in toilet paper? Did Paula vet it with her friends?! - but it’s safer and more complicit. She looks stunning (a noble nose, milky delicately blushed skin, bathed in that famous Dutch crisp, clear light) and she looks at us with power. We sense her knowledge as consenting adult. I feel effectively as much her subject as she is ours.

These later photographs are for me implicitly critical of the earlier. The artist is clearly interested in this disturbance in the triangular relationship of viewer, viewed and artist. Yet Kerstens’ actions in terms of his pre-adolescent daughter for me crosses a line.

Curator Claudia Arozqueta puts the complexity of this lightly but squarely before us as subject, signalled by the exhibition title Blue Nonage. The lovely word ‘nonage’ means “a person’s immaturity or youth”. That definition in itself suggests the person in question has since matured. ‘Blue’ points back to art historical connections. Arozqueta notes Thomas Gainsborough’s Blue Boy was a homage to Van Dyck. In the painting he dressed an eighteenth century boy in seventeenth century costume - a nostalgic looking back.

Alongside Kerstens the exhibition features Wellington artist Beverly Rhodes’ paintings of pictorially isolated Victorian-era children, and Catherine Bagnall’s dress-up roleplaying self portraits, created in collaboration with Aliscia Young. All three artists are exploring their construction of an active role in the relationship between the depicted person and viewer.

On my first scan of Kerstens’ photographs on the 30 Upstairs website I wondered why use the gallery. These images make great jpegs. Glossy, carefully crafted jokes. Objects for social sharing.

Such a thought however underlines the danger of the quick consumption of images. The actual experience of these works together in the gallery is different, and demands from you more consideration. As you step in the door eight sets of eyes coolly assess you, neatly positioned to meet your gaze. They follow you around the room. They feel empowered as a group. Considered all together you notice different things. For example how, amongst all the theatricality, a naked pierced ear becomes a telling point (a punctum).

The older portraits are exquisite. Precise in their exceptional detail, they are held by jet black backdrops from which the head and accoutrements emerge and float. Arozqueta has not hung them chronologically. We don’t watch Paula grow older. In fact it’s not clear at first that it’s the same person. The effect is uncanny. Yet there’s also a plain awkwardness in the later, and earlier images are mixed up. They are out-of-sorts in style. Whether selected by artist or curator, their appearance seems intended to cause disturbance: to make us consider more actively, beyond the silent open expression of the faces before us, the dynamics of the relationship between artist and subject.

Beverly Rhodes shares space well with Kerstens in appropriately small rooms. Her sketchy, smudged depictions of overdressed children from a different era are deliberately awkward, disturbingly miserable. They are perched lost against drab domestic colour fields, like magazine cut-outs. Next to Kerstens’ sharp photographic images, Rhodes’ are the ghosts of photographs in the rooms, blurry and uncertain in their painterliness. Vague, their clothes become misshapen and fluid with pigment, their little hands featureless. Dressed up for the Victorian photographic portrait in some unfamiliar salon, they don’t look happy. Presented as duos or trios, Rhodes gives the littlest children of the groups roughly painted clown-like black masks, with slits for their eyes, as if masking their identity. The effect is odd and cold, but strangely affecting, the relationship to Kirstens’ images again thought-provoking.

In three of the four paintings I find the relationship between the figures and their abstract backgrounds more awkward than poignant. Only one holds sufficient power. In A Boy’s Story two children float seated (but with no chairs) distanced from each other in a sea of black. Compared to the others, there’s a stronger more fluid shift between the photographic realism and abstraction. The figures in this painting appear like the afterimages of antique family photographs left when you close your eyes, hovering in the darkness behind the eyelids.

The contribution of Catherine Bagnall and Aliscia Young is in a separate room away from the other works. I wish however a way might have been found to bring them more into play with the rest of the exhibition, for there’s an interesting hide and seek with the viewer through photography and the shift between public and private. I am deliberately left to feel like I’m trespassing on private space. The artist appears deep in the bush, in her own imaginative play-space in hooded costumes, homemade out of embroidered, ornate heavy fabrics (old curtains or lounge suite covers perhaps) - complete with sewn ears, fur and stitched patterns. While Kerstens’ daughter’s face is alive to the world’s light, hooded Bagnall’s is enclosed, in her own world even when we see her face in profile. Again the domestic is evoked, the vision akin to Max’s room in Where the Wild Things Are where “his ceiling hung with vines and the walls became the world all around.”

Presented like stills from a film, I found the format awkward, and wondered if moving image would have worked better. The perspective offered photographically however is nicely the antithesis of that composed through objectified framing of models - the clothes horse, the object for consumer life. I like this inverted play, and its gentleness. Bagnall’s treasuring of the private imaginative space is what we are so in touch with as children. A private space that is ruptured so startlingly in Kerstens’ work.

A year ago Arozqueta showed another Dutch photographer Erwin Olaf with two local artists (Claire Harris and Edith Amutuanai) at Enjoy, and the exhibitions make for a strong pair. As here, at Enjoy each artist was quite different from the other but explored playfully the intimacy of the relationship between viewer, the viewed and artist. Olaf also photographs children and is interested in the parent-child relationship. He also plays a voyeuristic-tensioned game between subject and viewer, with an immaculate, crisp aesthetic and close attention to clean, tight design (an apparent Dutch style). The children in Olaf’s work turn away and hide their faces. They hold power in the twists of their bodies in a very different way to the model in Kerstens. Bagnall and Young’s work would have sat even better there. It’s as if this exhibition completes the other.

The two shows would have been even stronger as one. Yet I like the modest size of these exhibitions, particularly given the subject. Compared with the more typical large-scale theme exhibitions at the local public gallery or the crowding in of many artists into one small project space, the experience is very favourable.