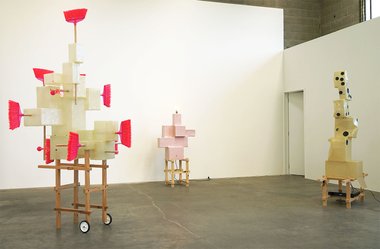 The sculptures often seem to allude to a presence by absence. In 'The Middle Ages' it is an empty armature/chair; perhaps a missing mother. The sculpture 'Fête/Fate' is mounted on some kind of litter or catafalque, so where and who are the bearers? The viewer is invited to ponder the implied social relationships hinted at by these details and the titles - filial, hierarchical, and marginal.

Viola: I pity you.
Olivia: That’s a degree to love.
Viola: No, not a grize; for ‘tis a vulgar proof,
That very oft we pity enemies.
- Shakespeare, Twelfth Night, Act III, Scene i.

Light bulbs and audio speakers create the focal point for faciality, while chair-like armatures allude to the seated figure, but then again Reddaway‘s work has always been about the possibilities of the human form, conceiving of the body as the basic building block of society. The found objects and incongruous materials and the self-consciously awkward forms undermine the haut seriousness of the fine art context and the oppressive nature of some of the intimated Foucauldian social hierarchies. The viewer must consider their own relationship and body in regard to these social categories. Is it pity? Are we laughing with or at these entities?

One sculpture, De los Pobres (Spanish for “of the poor) has its volumes accented by the horizontals and verticals of fluorescent pink plastic brooms with the playful addition of pink plastic bulb horns. The towering Embassy blares from the black speakers that dot its waxy skin like so many insectile eyes. The Middle Ages: Father and Son are the eponymous family members seated side by side chatting pleasantly away. Was King, a sickly Brasso pink, sits on its wooden throne, its lightbulb head turned on and off (sexually, one presumes) by a phallically placed toggle switch. Reddaway’s sculptures are full of witty little details like that.

I am reminded a little of the Ray Bradbury story Tomorrow’s Child set in the near future where caesarean sections are accomplished by teleporting the baby out of the mother’s womb. However the baby ends up partially in another dimension and is only visible in ours as a blue pyramid. Perhaps we are just in the wrong dimension to see these beings as people and the artist is challenging us as viewers to reconsider the space/time/social relationship we occupy.

The sculptures often seem to allude to a presence by absence. In The Middle Ages it is an empty armature/chair; perhaps a missing mother. The sculpture Fête/Fate is mounted on some kind of litter or catafalque, so where and who are the bearers? The viewer is invited to ponder the implied social relationships hinted at by these details and the titles - filial, hierarchical, and marginal.

As a counterpoint, the back gallery provides a number of Reddaway’s figure drawings, graphite on paper, but each partially obscured by brightly coloured blocks of acrylic paint. This further suggests the notion that everything we see in the show would appear to be naturalistically figurative were it not obscured by some spatial or perceptual anomaly on the viewer’s part.

Reddaway describes his oeuvre as “baroque”, less in the art historical sense but as part of a messy thread that reacts where cultures and ideas rub up against each other. They also have much of the playful theatricality and drama of the more traditional Baroque where much of their charm lies. The silent authoritarian rule of the Academic figure has been tamed by jollity and improvisation. Once we anthropomorphise the sculptures, we feel pity at their awkward self-consciousness as potential beings, but as to whether this leads to love or hate at the social relationships is not immediately obvious.