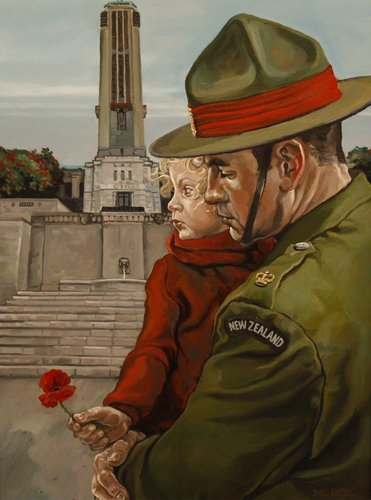 2015 is still five months away and yet New Zealand's great commemorative year vis a vis the Great War of 1914-18 is already making its presence felt. So much so that many are eagerly awaiting the dawn of 2016 when most of it may have blown over.

2015 is still five months away and yet New Zealand’s great commemorative year vis a vis the Great War of 1914-18 is already making its presence felt. So much so that many are eagerly awaiting the dawn of 2016 when most of it may have blown over. Even in this time of relative austerity, there’s a good deal of government money available for seeding any number of related projects, and while over recent years there’s been a growing enthusiasm for Anzac Day commemorations of an almost religious intensity, this official funding gives rise to a suspicion that its sponsorship for furthering the dubious quest for what’s termed “national identity”, a manufacture based on the tragic mistakes of Gallipoli somehow being “our finest hour”.

The historical consensus seems to be that “our boys” signed up to help defend the Empire, no matter how naïve they may have been or that so many of them died so needlessly. And all for an Empire that lasted much less than a thousand years. The commitment to Empire was fundamentally a political one, and the construction of a national identity is a political project too. In the last fifty years as the myth of New Zealand’s egalitarian homogeneity has gradually unravelled - the gap between rich and poor widens, formerly “happy Maori” have become “uppity”, “normal” is the new beige - politicians of every stripe have felt the need to paper over these cracks with the fake embossings of unity. “The Fallen” have died twice: once on Flanders’ fields and now sacrificed on the altar of political expediency.

Over those fifty years, too, there has been a gradual shift as to who gets to interpret the meanings of the Great War. Until around the mid-1930s the politicians held the upper hand (concurrent with and because of imperial survival), but since then historians have gradually become custodians of the processes determining causes and unravelling the effects. Not just because of the end of the British Empire, but for a number of other factors. Firstly, the inexorable march of time itself and the succession of generations - it’s easier to accept that your relatives may have died in vain if you never knew them. Secondly, with the growth of general education people tend to be less susceptible to jingoism. Thirdly, politicians have their hands full with contemporary events and little time, appetite or even knowledge to venture far into the past. Three election cycles is about their natural limit. (The exception, of course, is Winston Peters; he can go back to Jurassic Park.)

Historians have few natural limits. The political spectrum of the 2015 commemoration stretches from 1915 to 1918. The historical spectrum of Gavin McLean’s show at Shed 11 stretches from 1914 to the present; hence that “enduring” of the sub-title. Without having to rely on any notion of national identity to shore up or justify his thesis, he’s drawn together from, mostly, public collections a rich variety of images and objects, historical dots joined together by accessible and informative wall texts, themselves salted by observations such as Ettie Rout’s on Lord Galway - New Zealand’s last Governor and first Governor-General - that he had not “enough brains to make a nightcap for a grasshopper.” Perhaps oddly for an exhibition about death and destruction this is a lively and enjoyable show, and as such one of the most coherent and significant exhibitions ever mounted by the relatively rookie Portrait Gallery.

McLean’s thesis is that the Great War is still going on for New Zealand, both in its penumbral effects and by an ongoing revision of its historical impact, a shaping that must also include its dragooning into the national identity project, but this remains a subject which the curator - an historian with the Ministry of Culture & Heritage - tactfully avoids. And, it’s cheerfully admitted, the exhibition is not lesser for the lack. Facing the Front is not a decent forum for this debate. In the presence of so many faces from the past, decency is the least we can accord them.

Who are these faces? There are the soldiers and sailors, of course -and, for the first time, airmen - but just as many of the politicians who were enthusiastic at the start of the conflict but became increasingly troubled by the growing human toll and issues of conscription and finance. The show opens with a huge ceremonial portrait of George V by court painter Luke Fildes, followed by various politicians, including the great Augustus John of Bill Massey, the war-time Prime Minister, the work in the Te Papa collection and rarely seen. Of course, the images in Facing the Front are there primarily as documents, not great works of art, so there’s a spectrum of achievement from the iconic, say, Christopher Perkins’ portrait of Professor von Zedlitz, to the barely competent, say, well, that’s a secret. In a way, this sometimes shabby parade parallels the imperfect conduct of the conflict, as well as mirroring the “Tommys” who formed the troops: a social spectrum of men ranging from blacksmiths to the sons of gentry.

Nevertheless, this visual parade includes a large number of B-listers in New Zealand art history and provides a rare opportunity to see more than one portrait by the likes of Walter Bowring, George Butler and Archibald Nicoll, whose gentle image of Sir Francis Dillon Bell is without the painterly bombast of his usual style, while his painting of Defence Minister Sir James Allen is an example of his commission mode. Incidentally, Allen described the fated Gallipoli campaign (which claimed his son John) as “ill-conceived and mad.” There are also portraits by Richard Wallwork, Francis McCracken and Elizabeth Kelly, the last-named’s a reminder of a comment by the acerbic Degas on one of Bouguereau’s battle pictures that “everything is metallic except the breast-plates.” There’s also a rare portrait of the younger Joseph Ward (later Liberal Prime Minister) by van der Velden.

It’s not all about the conventionally great and powerful though. The show includes images of scientists - fighting the war in their labs - represented by a 2013 Dick Frizzell gouache of Ernest Rutherford - and dissenters, represented by an infrequently seen (but often reproduced) Theo Schoon charcoal portrait of the elderly Archibald Baxter, this country’s most conspicuous conscientious objector who was virtually tortured at the Front for his stance. The opportunity to see this marvellous work from a private collection is reason enough to visit the show. The hysteria of extreme patriotism leading to Baxter’s torture also lead to the disgraceful treatment of people whose only crime was to be German. George von Zedlitz was an honoured professor at Victoria University College, and when its administration failed to dismiss him Parliament passed the infamous Alien Enemy Teachers’ Act in 1915 so that Zedlitz ended his days teaching privately. “Our boys” were away ostensibly fighting for values not thoroughly observed at home. Perkins’ truly iconic portrait of the wronged professor - donated by “A Grateful Student” - is one of the glories of the university collection and seldom seen beyond its Kelburn halls.

It’s an armchair complaint to point out omissions, but there is one very notable absence from this show, on account of both the subject and the nature of the painting. Dave Gallaher was a notable rugby team captain - of “The Originals” no less; the first All Blacks - who died in 1917 at the age of 43 at Passchendaele. There’s a full-length portrait of him in Archives New Zealand by H Linley Richardson, one of his greatest works and a masterpiece of sheer painting. Gerald Barnett included it in his Faces of War exhibition for the fledgling Portrait Gallery in the Bowen House Gallery c2000. It should have been in this show too.

Perhaps the oddest image in the exhibition is a portrait of the venerable A H Reed, labelled as “soldier/writer/publisher/philanthropist”, who recorded his war experience in diaristic form illustrated by his own watercolours and photographs for his “soul mate and wife ‘Bello’”, and later published by his company in the book First Walks in New Zealand, the account described by curator McLean as “a most extraordinary wartime love letter.” The work is undated, but it’s said to have been commissioned for the 50th anniversary of the company, which would place it around 1957. The portrait is attributed to well-known New Zealand artist Denys Watkins who was born in 1945. It seems unlikely a commission would fall to a 12 year-old, but, looking at the work, maybe it was.

As the 20th century progressed, the Great War narrative fell to historians and novelists. Murray Webb’s cartoon of Maurice Shadbolt represents the latter category while military historian Chris Pugsley is depicted in a very recent, overly expressionistic portrait by Harriet Bright, commissioned by the Portrait Gallery itself, followed by three other historians - Jock Phillips, Jane Tolerton and Ian McGibbon - in a series of rather indifferent photographs. It might have been hoped that in the century since the Great War an understanding of the distinction between a document and an art work may have become a little more sophisticated.

Facing the Front has a lot of strengths. But it has three conspicuous weaknesses. Firstly, as the saying goes, there are too many Chiefs and not enough Indians. Of course, the Tommys generally lacked the glamour of the bigwigs, but they were as much part of the Great War, and at the beginning of the 21st century both historical practice and the availability of imagery makes this lack hard to understand. Secondly, the crucial supporting role women played is only touched on here and there. This is equally hard to fathom and for the same reasons. Thirdly, in terms of sourcing photography, the curator seems to have confined himself to images from the studio of S P Andrew. Public photographic archives here are bursting with images of Great War soldiers, and the failure to consider these vivid and telling portraits is inexcusable. Even Te Papa’s current and modest The Berry Boys show of this material does heaps better, touching as it often does on the family webs most ordinary soldiers emerged from and who later mourned their often pointless deaths.

In a wider context, exhibitions such as this wisely remind us that historical business is never quite finished. Pakeha, for instance, assume that all issues surrounding the Treaty settlements process can be “wrapped up” by a certain date. Maori, on the other hand, tend to think otherwise: not because they are rapacious or more litigious, but because they have longer memories. McLean’s show suggests we still have a long way to go before understanding what the Great War meant and might mean for us. Facing the Front is anything but a last post.