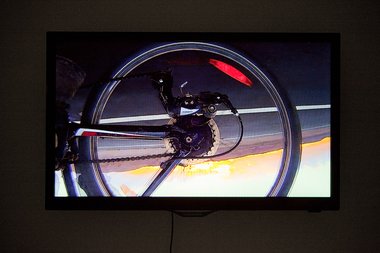 Parallel Harmonies is a clever title for this exceptionally engrossing, richly layered Phil Dadson survey. It is apt because you have the sensual pleasure of the parallel harmonies of his various music projects, like From Scratch (represented by Gregor Nicholas’s wonderful film: Pacific 3, 2, 1, Zero Part 1) or his stone recordings (Fate of Things to Come). That is pretty obvious.

For me, because I’ve followed his work a lot over the years, I‘m aware of much that is not in this thirteen piece ‘sampler’ and also pleasantly surprised by much I also was unaware of - the result of Dadson being such an indefatigueable international traveller and performer, a highly productive, outgoing, energetically ‘global’ personality with a deep curiosity about and affection for humankind, the music that it makes, the more elemental (land-based) lifestyles it creates and the extreme geographies it sometimes inhabits.

There are five works I find particularly exhilarating.

One is Processional (2007), a five minute video filmed in South Delhi of shadows from traffic moving along the Mehrauli highway projected onto an adjacent wall. It seems to reference Plato’s cave and notions of reality and ideal forms, while various filters change the colour and the artist the speed of the whizzing elongated shapes. It is a comment in the transience of life, various levels of existence, the speed of ‘the journey’ and spiritually symbolic (chakra?) colour that washes over the (at times) frenetic activity.

Looking at other works, in this show Dadson presents three videos made in Chile’s Atacama Desert, one of earth’s driest locations. The themes of inversion (indicating rejection of the material world) and individual agency through thought are asserted in the ritualistic Atacama handstand (Headstamp, 2014) video - and also elsewhere in the Between Worlds (2011) canoeing video.

There is a certain amount of sly humour in Headstamp where in the dramatic desert landscape he prepares himself by swinging his hands (disembodied by the frame of the camera) to and fro in isolation - as if suspended from a trapeze, but actually hunched over. At Dadson’s opening, I saw some young children watching this, mesmerised (like me) - trying to figure out where was the rest of him?

In my view the exhibition’s tour de force is Desert Tomb (Atacama) 2014, a twenty minute video that focuses on a rocky outcrop with amazing vertically aligned knobby textures that seem straight out of a Max Ernst painting. It then examines the flat caked mud plateau and its meandering salt lined crevasses that we can only guess the depth and width of. These geological formations are truly haunting.

Arid Edge (Atacama) is distinctive with its gorgeous shots of the late afternoon sky and barren foothills as Dadson cycles along a road that cuts through the dehydrated wasteland, cleverly filming himself from unexpected angles with a camera attached to a light pole. The swooping movement of certain shots, as the film unexpectedly switches sides, bike ends or inverts its image entirely, creates breathtaking surprises and unforeseen dramatic tensions with the austere landscape and unrelentingly energetic rider.

The three channel work, Fate of things To Come (a conference of stones), where Dadson makes delicate music with rubbed, ground, tapped, or clicked wet stones and carefully cupped hands, attracted a large audience of admirers in February last year when presented in a group sculpture show in the Viaduct silos. With the concrete walls around it, it was an extraordinary visual and aural experience. In the Clark gallery however, instead of the three screens being a three sided sculpture they are butted together in a line across one wall, creating a simultaneous visuality not present in the original which you had to move around. This is an exceptional work in an exceptional show that is hugely varied in its retinal/aural offerings. It shouldn’t be missed. Essential viewing.