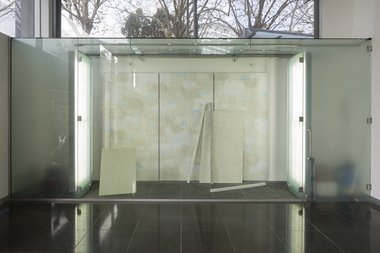 The two artists explore a shared concern: the impulse to reach across distances by unmasking and interacting with architecture; a fundamentally fraught and intractable object. We see a painting as a wall and a wall as a ‘painting' at an easily negotiable scale. The scale and materiality of architecture is recast and remodelled as hand-held, improvisatory, transitional and contingent.

The contemporary architectural façade is a flat space. It appeals to us as a shiny, technologically sophisticated surface. But if buildings only mimic or reflect the technologised present then, like the fleeting allure of the latest fashion trend, they age very quickly. Façade Charm, an installation of beams and screens reveals its ambivalence towards the growth in popular demand for architecture as spectacle or highly aestheticised image. A high degree of visual ambiguity and production skill runs throughout most of these objects, in addition to the painted panels hanging behind them. The artists have tirelessly worked granular materials to produce a contrary group of highly accented, patterned works, all holding together like downed tools on a construction site.

Amber Wilson‘s abstract painting forms the colour wash backdrop to the installation. Its large, three-panel plywood expanse brings to mind the temporary fencing common to construction yards. The painting demonstrates her preoccupation with creating retinal movement, the surface quietly humming with patterned washes of bleached, earthy tones. This work is much less dense (suitable in this context) than other recent paintings, which contrast teeming shapes set against patterned fields, in sets of floating worlds.

Wilson revels in offering the viewer the liminal and the imperceptible, the almost translucent and the densely patterned, so things remain productively open and frictional. Her images emulate natural processes; cellular forms traverse a circulatory system - paintings as scientific imaging. Wilson reveals the texture of substances through a microscopic lens; suggesting the generative processes that govern biological systems, as well as the complex interplay between their parts. Overall, the effect is quietly inviting, since harmony prevails over discord. Providing relief within the agitated patterning, translucent forms open up portals to create restful interstitial spaces within some images.

Amy Unkovich repurposes the methods and materials deployed in the trade fabrication of bespoke working surfaces, such as exterior wall coatings and high-end concrete worktops. At first glance, Unkovich’s carefully fabricated concrete and plaster beams, with their seductive, intricate materiality, might be misconstrued as simply sculpture with a corporate, fetishist charm. But unlike John McCracken’s polished, autonomous columns, the scale and attitudinal bearing of these beams suggest tools, struts or construction braces; at hand and ready for use. These objects are transitional; they are about an ongoing process, rather than being fixed columns to lean against for stability.

Two screen works suggest contradictory impulses. First, a monochrome screen with a stippled, pebbledash face leans casually against Wilson’s painting. Pebbledash is a composite of sand, cement and pebbles used as an exterior house coating as protection from the vagaries of weather; a cheap, hardwearing skin. Once popular in post-war Great Britain, as a means to hide inferior construction work, pebbledash is now largely a much maligned, outdated trend. In the foreground slouches the distant cousin of this trend: a freestanding gib board structure roughly sloughed with brown plaster. The rough cut structure is painterly and simple, held up by a clunky timber leg, curiously bent at the ‘knee’. In their improvisation and maverick allure, these works index human pragmatism and cheap, hardwearing construction materials. The tactile irregularity and muddy poise of the screens is a pleasing foil to the cool, material refinement of the concrete and plaster beams.

This successful exhibition provides the artists the opportunity to explore a shared concern: the impulse to reach across distances by unmasking and interacting with architecture; a fundamentally fraught and intractable object. We see a painting as a wall and a wall as a ‘painting’ at an easily negotiable scale. The scale and materiality of architecture is recast and remodelled as hand-held, improvisatory, transitional and contingent. The artists bring into focus the issues typically masked by architectural ‘cosmetics’; the concealment implicit in architecture’s public face and prestige; and the obligation to be seduced and awed by its ‘big buildings’. 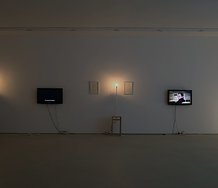 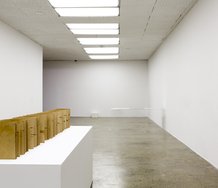 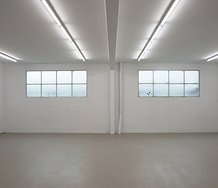 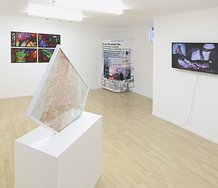