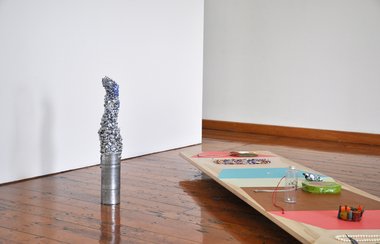 The artists in Matter reveal a number of common interests - an amoral attitude to aesthetics and materials, and a fabrication of narratives, positioned between certainties and the virtues of ambiguity. As artworks characterised by a conscious and unashamed bonding of differing shapes, materials or images, there is a directness about these works that is convincing in its candour.

Matter brings together a series of works by Adrienne Millwood, Suji Park and Lisa Walker, cultivating a shared attitude to imagery and approaches to materials. Fragments and glimpses of narratives, found objects and materials, are all contemplated and interrogated in works that openly admit to the evidence of their evolution and assembly.

The artists in Matter reveal a number of common interests - an amoral attitude to aesthetics and materials, and a fabrication of narratives, positioned between certainties and the virtues of ambiguity. For example, colour harmonies in Adrienne Millwood’s Strange Attractor and Unified Field, (greens and pinkish reds in particular) are just as essential to Lisa Walker’s brooches and jewellery.

Suji Park’s Tuk, a piece-by-piece assemblage and sculpture, fakes a kind of intuitive and organic method of construction, sharing something of Millwood’s interest in her painting as a calculated disclosure of materials and processes. Both make artworks that merge and position things together in a desire to establish a greater whole, highlighting perceptions of the presence of the artist’s hand evident in the act of making. As artworks characterised by a conscious and unashamed bonding of differing shapes, materials or images, there is a directness about these works that is convincing in its candour.

Exhibited as a series of brooches and jewellery from 1996 to 2014, Walker’s jewellery continues to argue its case for being something other than anticipated. Though she designs and constructs her brooches in materials such as fresh water-pearls, sticky tape, steel, wood, thread and silver, to describe Walker’s choice and use of materials as generous or eclectic, seems limiting. Moving between disciplines of sculpture, furniture, adornment or painting, her jewellery touches upon questions of aesthetics, cultural imperialism, the politics of adornment and how the space of a gallery can be rethought and reinvented.

In this current exhibition, the context of the gallery appears to be a central concern. Orchestrated like a pick-n-mix-bag of colours, shapes, surface and textures, each piece of Walker’s jewellery seem intimately linked, the rowdiness and complexity of materials brought to order and reconciled on the surface of a Gavin Chilcott-inspired, abstract geometric painted design.

Resonating something of the spirit of Walker’s jewellery, Millwood’s Strange Attractor, when suspended by an extended metal chain from the gallery wall, is positioned as painting and also as painted object. Working paint over photo-release images, Millwood integrates the relationship between materials and subject. Imagery, process and materials all democratically occupy centre-stage in works like Strange Attractor and Unified Field, assuming the disposition of an evolving multi-coloured Miro checkerboard.

Matter (as in material) is at the centre of the curatorial premise of this exhibition, yet in the participating artists’ response to materials, it is very much about their qualities and potential in the widest sense. Millwood, Park and Walker all make work that has a tendency to extend considerations of what the materials in a work of art are expected to undertake and how they interact with one another. They direct attention to questions like; where does this position this work? How might someone else read or comprehend it? Outwardly, Matter may be directing attention towards the purely tangible, but Millwood, Parker and Walker’s art also has a tendency to nicely and comprehensively dematerialise all certainties.