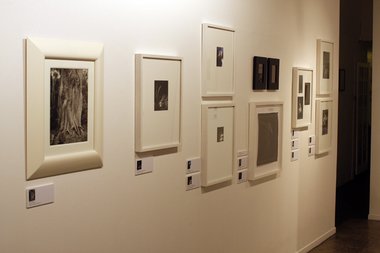 Even though in this big show, each item needed space to be individually savoured in isolation, as well as in a gallery context, for residents of Devonport this contribution to the Eleventh Auckland Festival of Photography was a golden opportunity to effortlessly familiarise themselves with the achievements of some of this country's finest image makers.

With approximately seventy-five images to scrutinise from twenty-one artists, this delicious assortment of botanical photographs - handpicked and carefully sequenced like an orchestrated tune - revealed how Paul McNamara (as curator) likes to work with various juxtapositions and foils: focussing on shape, content, tone, chroma, pattern, size and framing method.

The hang was obviously sequentially thought through (a linear progression) but in the Depot space it was too cramped. It was as if the running meterage of the walls was never effectively calculated. The display badly needed air - not too much (you need to be able to easily compare neighbours; if too spread out they become isolated) - the framed rectangular rhythms being monotonous and claustrophobic.

It could have easily been done well. Two movable walls had entire sides unutilised, and the small front gallery by the entrance would have given Flora Photographica Aotearoa more wall space. Plus the chunky wall-labels (with mini-images of each work) intrusively pressing close to each exhibit, were not necessary. A takeaway list of works would have sufficed.

Even though in this big show, each item needed space to be individually savoured in isolation, as well as in a gallery context, for residents of Devonport this contribution to the Eleventh Auckland Festival of Photography was a golden opportunity to effortlessly familiarise themselves with the achievements of some of this country’s finest image makers. Most artists had two or three items each, but Peter Peryer and John Johns had about ten, Max Coolahan a dozen, Janet Bayly eight, and Andrew Beck five.

Because the trees and plants provided the subject matter, numerically Peter Peryer dominated over, say, Laurence Aberhart. (If the focus were on architecture, for example, it would have been the other way round.) Some of the contributors, like Lisa Crowley, were more known for their colour work, but here black and white was the norm - punctuated by the occasional burst of (usually) muted colour. The mood was therefore sombre but exhilaratingly crisp with the precise effects of light on vegetative form - be that leafy, wooden or petally.

The photographs themselves in their approach to botany came in several types: details of plant parts; solo specimens as objects for contemplation; views of landscape where trees, bushes, or grasses collectively dominate; specimens dead or alive; if ‘collected’ or if in ‘nature’; blurred or precise; domestically modified or feral.

With McNamara’s methodical (but dense) arrangement one was very aware of the types of framing, the cut of the internal mount or outer rim thickness, its angle and colour - and if stacked up double or mid-poised single, what that did to the contained image, and how it had ‘conversations’ with its neighbours. Peryer and Johns, because they had a lot of wall space, may have been the stars of this show, but there were plenty of other remarkable works by, for example, Bayly, Beck, Henderson, Bosworth, Noble, and Barrar. The exhibition will reopen in McNamara’s own gallery in Whanganui at the end of this week.

The exposure to and appreciation of a local audience for significant photographic works, which was evidenced by the time visitors spent in the gallery engaging with the works.

The opportunity to communicate more deeply with an interested audience about the works.

A great educational opportunity – for people to find out more about New Zealand photographers and their processes.

An appreciation of the variety of ‘ways of seeing’; each artist approaches the subject in such highly distinctive, personalised, ways.

The Depot has a loyal local audience and many would have been unlikely to see Flora Photographica had it not travelled to the Depot.