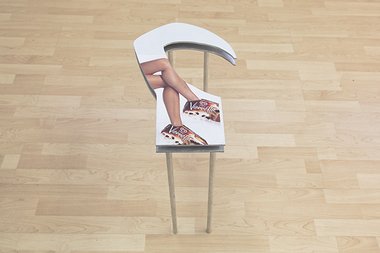 Martyn Reynolds presented the opening show for Gloria Knight, and this one, the twenty-fifth for this gallery, is his second here. Again, using cast aluminium, but instead of flat disc forms, each one now is vaguely rectangular - with strangely awkward wonky edges.

These bladelike shapes are sandwiched together in pairs. One type is like a scythe, the other like an NT cutter or curved scalpel. The two different shapes are layered together, or two of the same with one flipped over - or a pair where a chunk has been cut out of one. Of the five works total, three are hung on the walls, two are ‘tables’ on the floor, and four have printed images on their exposed surfaces.

The cast aluminium could be mistaken for forms cut out of plywood sheets and spray painted silver. The wood grain texture and knot holes are a conspicuous surface quality of these casts, and they provide a leading question - via the title - concerning their relationship with the digital images: is there a logical connection or is it a non sequitur format - a rejection of focussed or deducible meaning?

One could claim the support/surface relationship is logical as an exploration of the Nature/Culture distinction, so that the secateur pun pulls in references to manual labour within art production, as does the scythe for harvesting grain or cutting down the (Capitalist) enemy.

Reynolds’ digital images reference the advertising, promotion or acquisition of luxury goods (Mercedes Benz cars, Prada fashion model runways), early modernist painting (Leger’s ‘The Mechanic’) blended with a contemporary gallery (Leger’s tattoo punning on the Shanaynay logo), and (on a table) expensive ice creams that Reynolds converts into leggy women’s running shoes (while riffing on his current home base, Vienna). He also juxtaposes Skyped images of his fellow artists Francis Till and Oscar Enberg with news shots of the notorious broker swindler Frank Lehman (standing alongside a Mercedes).

He seems to be ridiculing the pumping up of fantasy that advertising entails, not so much the ownership of various extravagant commodities that is the end result, but the accompanying delusions that accompany possession. The ‘snipped out’ sickle and secateurs are in fact hooks that snare, baited with desire. They also, in relation to the punning title, morph into question marks that play with self-referentiality, with the logic (embedded in their own presentation of meaning) asking us whether their linguistic components connect or stay apart. All of which (as a collection of shapes) builds up an atmosphere of unease when these pasted-on objects are thought about.

In terms of the whole exhibition there is also another way of thinking about these strange sculpture/prints. Morphologically the different cast forms seem to be the same, though close inspection reveals the different permutations of pairing. Nevertheless, there is a sense of a continuum, as if all the aluminium elements are one element that is continually being folded, resliced and rehewn - despite the fact they were cast. This implies the same for the imagery, as if the pasted rectangles have all been cut from the same page, the same all embracing narrative that keeps rolling out on a strip, unleashed from a taut drum.