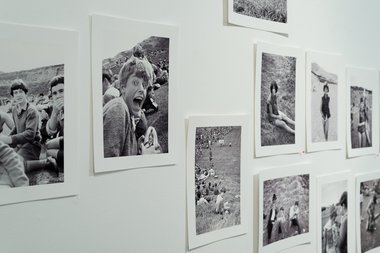 Even allowing for youthful ebullience, teenage guys acting up, and the performance conventions of subjects before a camera, these photographs radiate genuine fun, optimism and something even approaching happiness. In a school? Tut tut. Re-introduce those uniforms, quick, before it gets out of hand.

School photos. What does that phrase conjure up? For anyone over 35 it’s likely to be those seemingly endless shots of uniformed kids in serried rows, the boys with fists resting on hairy knees and the girls with hands demurely clasped, resting on their sexless, pleated skirts; the whole convention an unmistakable tribute to the institution’s perhaps central conformist role. Of course, the phone camera has changed radically what the phrase may conjure up now, but, bet your bottom dollar, the school annuals will remain full of those linings-up till, probably, the end of time.

Wellington’s Onslow College was founded (as they like to say) in 1956, around the time it became obvious to the planners that the post-war baby boomers were gonna need some schooling. It sits in the western suburbs on the cusp between the posh suburb of Khandallah and the more working-class suburb of Johnsonville, and the school has always identified with the latter. In the 1960s and ‘70s it was known as a “liberal” school, code for lax discipline, non-military values and subjects no right-thinking Pakeha New Zealander could see the point of. The school’s relative openness to difference marked it in right-thinking eyes as a tip for those unable to “fit in” to more conventional establishments. This will give you an idea of how bad things were: it was the first secondary school in New Zealand to dispense with uniforms.

In 1967 two 15 year-old students, Graham Wilton and Michael Bajko, used a hand-me-down camera to record casual goings-on at the annual sports day, their free-range style uncontaminated by any privacy issues. The eight rolls of film were developed at home in a wardrobe fitted out as a darkroom, all of which shows a degree of enterprise and innovation suggesting that sometimes schooling can result in education.

Until the 1950s most New Zealand homes didn’t have a camera, but by the later 1960s they had proliferated to the point where teenagers had access to them, and there were schools tolerating their use. Recently, Bajko made new prints of these photographs and they were shown in accessible groupings at the Capital’s equally enterprising and innovative Photospace Gallery. There was a lot of interest from past, and possibly present, pupils as well as from those always keen to see what the photographic medium can deliver.

And rightly so. At the level of documentary record these images are terrifically engaging, and the two young lads had a good eye. Not just for the moment but for the framing too. One of the beefs the right-thinking art world has had about photography is it’s just too easy, and for the man-in-the-street who thought Picasso’s drawings could be done by their grandkids, considering photography as art wasn’t even an issue. And yet, it’s salutary to remember that some of J-H Lartigue’s most enduring images were made when he was as young as 6. Whatever “having an eye” might mean, Lartigue had it then, unmistakably, and these Onslow guys had it at 15. There’s just too much consistency for it to be a fluke. Forget about all those monkeys on typewriters.

“Letting the work speak for itself” was a classic Modernist chestnut, and yet when it came to assessing photography a whole bunch of other stuff - much of it unassimilated prejudice - happened to get in the way. Messers Wilton and Bajko were “just” 15, they hadn’t been to art school, they were just “messing around” with (God help us) a camera on something as insignificant and common as a school sports day. The assumptions may suggest these are not promising conditions for making art, but what photography counters with is the quite legitimate question “Why not?” And letting these images speak for themselves answers that question, incontrovertibly.

The often complex processes of art making tend to mask the immediacy inherent in photography’s successes. Like a matchmaker, the camera simply facilitates a connection, one between photographer and subject, and the art is in this connection being conveyed, simply and with punch, to the resulting image’s later viewers. The connection involved is a fundamentally human response, and trained or not, very conscious or not, both Wilton and Bajko knew in their bones what they were doing.

Even allowing for youthful ebullience, teenage guys acting up, and the performance conventions of subjects before a camera, these photographs radiate genuine fun, optimism and something even approaching happiness. In a school? Tut tut. Re-introduce those uniforms, quick, before it gets out of hand.

Outside the routines of the classroom the annual sports day is bound to be more relaxed and enjoyable. Even so, sports days are also highly organised and regimented, all part of the 19th century schooling project founded on the notion of Juvenal’s mens sana in corpore sano: a healthy mind in a healthy body. The New Zealand-born art historian, Patrick AE Hutchings, a product of St Pat’s in Wellington, used to insist this was a mistranslation: he said it should be “A healthy mind or a healthy body”. A learned and intelligent man, he was reacting to a common emphasis on organised sport in schools, usually at the expense of such sissy subjects as art and music, although, since he endured the system, things have changed a great deal in that respect.

All the same, in the news section of Onslow’s current website, seven of the eleven items are sports-related, and there is none about anything even vaguely “cultural”. So maybe Juvenal’s still only getting it half-right. It’s taking a long time for regimentation and conformity to get squared up with that healthy mind. In the meantime let’s celebrate what Graham and Mike did so spontaneously on that day in 1967. Their images not only radiate happiness, they radiate hope.