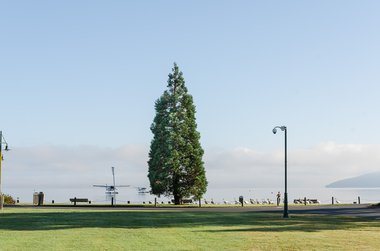 Mary Macpherson's take on botanics in her Photospace show, Bent, bypasses the more seductive floral and opts for the much plainer tree. In reading the accompanying artist statement (mercifully descriptive rather than the usual pseudo-philosophical) there's a temptation to suspect that this new project is borderline PBRF - those tertiary institutional inventions the world can well do without and what Justin Paton memorably called “homework”. For them and us.

Wellington’s biennial New Zealand International Festival has never had much of a conspicuously visual component in the quarter century or so it’s been going. There’s seldom been much evidence of the public galleries capitalising on the event, tailoring their usual programmes to address the audience the Festival gathers. It’s been pretty much a case of more of the same. Money’s probably an element in this, but there’s a sense inertia might be a component too. Or even just bad planning: for instance, Te Papa’s gallery devoted to big touring shows is closed during the Festival, between exhibitions about the Aztecs and Chinese emperors.

The City Gallery’s South of No North show from Sydney’s Museum of Contemporary Art is about the only public show with any international flavour, but it closes halfway through the Festival having been up for a couple of months. It features three artists: Australian painter Noel McKenna who is well-known to Wellington audiences, NZ photographer Laurence Aberhart, and eminent American photographer William Eggleston, so it’s really more of a touch of spice than an actual flavour. Great spice though - those Eggleston prints are mouth-watering.

The only non-public gallery rising to the challenge photographically is 30upstairs in Courtenay Place, mounting a show called Internationally Renowned Photographs consisting of fifteen images drawn from a local private collection. While ostensibly about photography, the show’s more about collecting trophy icons such as Bill Brandt’s Elbow Nude, London of 1962, Paul Strand’s The white fence, Port Kent of 1916, Henri Cartier-Bresson’s Behind the Gare St Lazare of 1932 and Edward Steichen’s Moonrise, Mamaroneck of 1904. While it’s always good to see “the real thing” of these oft-reproduced images, their lack of any context leaves them stranded on the gallery’s white walls, imprisoned in their reliquary-like frames. It’s the less well-known images such as Arthur Leipzig’s East River Divers of 1946, Ansel Adams’ El Capitan of 1952 and Tony Ray-Jones’ wonderful Bacup Coconut Dancers of 1968 that gives the show its real juice.

An undated Helmut Newton Fetish Figure is accompanied by a label including this: “Despite being a hate figure of radical feminists at the time, Newton’s work is considered as empowering the perception of women.” Something to think about, for sure. And, just how “renowned” the two most contemporary photographers included might turn out to be remains an open question. The large 1991 Polariod by the American Joyce Tenneson and the three 2002/03 works by the Dutch Desiree Dolron are more likely to become icons of contemporary taste than adding anything much to photography’s history.

Coincidentally in all probability, there’s a range of photography shows showing across the city during the Festival which definitely injects some feast into the notion of festival. At Te Papa there are two small exhibitions from the collection put together by the new, half-time historical photography curator Lissa Mitchell which are cause for hope. The Works on Paper gallery on Level 5 recently hosted a revelatory show of some Frances Hodgkins fabric designs, which drew some interesting parallels with Gordon Walters’ gouaches of the 1950s. For Mitchell’s new show there - Letting Us In - she has devised a series of 10 pairs of photographs, historical to contemporary, making intelligent and stimulating use of the Museum’s large photography holdings. The theme is domestic interiors, and by pairing particular works the curator has set up a compare-and-contrast scenario that illuminates each image and illustrates what photography does best: an alluring banquet of very plain fare. There’s Walker Evans/Richard Wotton, Chapman-Taylor/Ann Shelton, Jerry Uelsmann/Laurence Aberhart, Gordon H Brown/Gary Blackman, and a fascinating pair by Muir & Moodie depicting the bedroom in Dunedin’s Fernhill Club where the Duchess of York stayed in 1901 contrasted with C P Parkerson’s photograph of the bedroom of Makereti Papakura (Guide Maggie) at Whakarewarewa, taken at much the same time - a pairing of some potency.

Of all eight exhibitions being covered here, only one - 30upstairs’ international collection - is not themed around the subject matter. Having a theme based on subject matter is a handy hook for a curator on which to hang an exhibition, but in the case of photography it can be a risky strategy. Being viewed merely as subject matter has been the medium’s bane since its invention, and however much a canny curator may construct a themed show there’s always the potential for reinforcing this visual prejudice as much as reducing it. Both prose and poetry consist of words, and it’s the curator’s challenge to transcend the prose and trigger the poetry.

At the entrance to the Level 5 galleries at Te Papa there’s a space called Up Front, an L-shaped wall which hosts small shows, changing every eight weeks or so. This time it’s a selection by Lissa Mitchell of ten photographic images on a botanical theme, “continuing the still life genre” as the introductory label states. There are the usual suspects represented, such as Anne Noble, Janet Bayly and Peter Peryer, with slightly more surprising contributions from Yvonne Todd, Mary Macpherson and Gavin Hipkins, all enriched by Imogen Cunningham’s tonally nuanced Magnolia Blossom of 1925 and Mapplethorpe’s harsher image of tulips in a vase. Paul Caponigro’s dye-transfer print Red Flowers, Kyoto of 1976 is vivid enough, but it’s eclipsed by Martin Bruehl’s frankly gorgeous carbo print from the later 1930s Flower. This is one helluva sexy photograph.

It seems something’s in the air around anything botanical right now. Apart from this small Te Papa showing there are three other fairly substantial photography shows on around town with plants as their focus. The first, a group show, Flora Photographica Aotearoa, organised by McNamara Photography in Whanganui is mounted in the unforgiving first-floor foyer space at Bowen House on Lambton Quay: the site’s configuration is anything but sympathetic to coherence and the harshly lit white walls practically headache-inducing. Besides, since the building’s home to many MPs and parliamentary staff, access is of the post-9/11 airport kind, just short of actual frisking. Luckily the show itself provides substitutive excitements making any visit well worthwhile. The eyes have it. The almost-seventy images are a mix of the semi-historical and the contemporary, the former including such pivotal figures from the 1950s as John Johns and the little-known Max Coolahan. The Johns’ image Sundew flower is a masterpiece of subject, form and printing, and even in more austere black and white it rivals the Martin Bruehl Flower at Te Papa in its richness and intensity. Other standouts are Andrew Beck’s small black and white images, Greta Anderson’s two compelling dusk scenes, and other images in colour by Derek Henderson and Gary Blackman. The last-named’s image of a bunch of thrown-away peonies is further proof of his fate as an unacknowledged master.

At Suite in Cuba Street, Fiona Pardington is showing Still the Glance: a selection of works from the McCahon Residency, seven inkjet prints all dating from 2013. These are grand constructions in the manner of the 17th century Dutch vanitas tradition. As one visitor to the gallery said to her companion “They look just like paintings”, which may be the photographer’s intention. Maybe not. They have the seductive power (bordering on the irresistable pull of a pavlova) of Richard Orjis’s floral works, the faint scent of decay polluting the perfume. Given Pardington’s practice, it’s unlikely these operatic images are just aping the vanitas tradition. (Although that might be enough for art collectors still nervous about photography.) The realism aspired to by those Dutch painters was a precursor to the realist movement of the 19th century, one of the mothers of the photographic invention. The recent shift from analogue to digital is, perhaps, the biggest development in the medium - not only technically but conceptually - since the advent of the paper negative in 1840. And it’s possible these Pardingtons pay opulent homage to the passing of that phase of photography’s life. Maybe they cock a snook, too, at the medium’s long-claimed verisimilitude, remembering the despairing observation in the Book of Ecclesiastes - the origin of the vanitas tradition - that all human endeavour is ultimately in vain.

Mary Macpherson’s take on botanics in her Photospace show, Bent, bypasses the more seductive floral and opts for the much plainer tree. In reading the accompanying artist statement (mercifully descriptive rather than the usual pseudo-philosophical) there’s a temptation to suspect that this new project is borderline PBRF - those tertiary institutional inventions the world can well do without and what Justin Paton memorably called “homework”. For them and us. However, Macpherson’s is a worthy project, which, unlike the PBRF phenomenon, has a point. She began photographing trees about three years ago and “As I worked I became aware of how much we use wood. It seemed that one day a tree could be growing and the next - poof - split into lumber for a house or fence palings. Working with botanical ecologist Jonathan Kennett I realised how much our cultural choices have determined what the tree landscape contains, and how much of a commodity trees are. Our cities often contain beautiful tree settings, yet, if you look a little deeper, what grows in a city or the countryside may be a choice of inhabitants or councils acting on the values of the time.”

Photography’s good at focusing on simple things which tend to get overlooked, and Macpherson’s new work is an exemplary instance of this. Each of the twenty-two images could stand on its own, but collectively they span such a range of specific circumstances their impact is, classically, more than the sum of its parts. Besides, Bent has a freshness, a focus and - let it be said - an originally not always evident in her last major series, published and exhibited under the title Old New World in 2012. The result of several years’ travelling throughout the country, the project was more of a spiritual journey than a geographic one, a rather melancholy lament for the steady disappearance of the New Zealand of her childhood and youth, especially since the economic “reforms” of the 1980s. The road trip is a bit of a guy thing, and, formally, her imagery then tended to echo the style pioneered here by Robin Morrison and furthered by other male photographers such as John McDermott and Derek Henderson. But Bent is all good news. Macpherson’s subject may have been the bending of timber but, through these truly lovely and surprising images, her success is bending our consciousness towards something so ordinary it had so far escaped our attention.