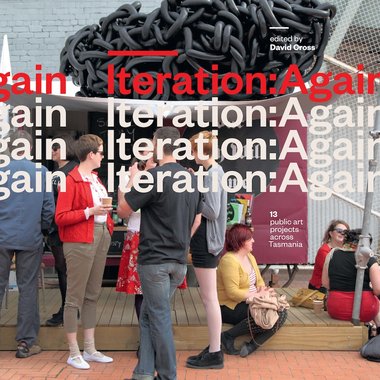 With this particular collection of accounts of performances, the great contribution I think is from the critical respondents, even though their names are not listed on the cover, or even on the contents page - nor is there biographical information about them. These writers are more important in the long run than the curators who invited the artists - they have a direct personal voice that communicates directly with the readership about what happened.

This hardcopy publication is the online documentation of an international performance festival organised by David Cross in Tasmania over September - October 2011. Iteration Again was commissioned by Contemporary Art Spaces Tasmania (Cast) and funded by Arts Tasmania, Massey University, CNZ and other arts organisations. As a document this is similar to the One Day Sculpture book Cross edited with Claire Doherty, the internationally esteemed relational aesthetics curator. In my view though it is much better, being a more focussed selection of artists (though a much smaller number of events); a more experienced array of writers; and a different sort of emphasis that examines duration and repetition. The two red books make a nice pair. They both are beautifully designed and both present a lot of information via varied writing and artmaking approaches.

For this festival, there were thirteen events involving twenty-one artists (nine ‘international’ [nonAustralian / NZ ones] being within Paul O’Neill’s contribution) that include Kiwis David Clegg and Maddie Leach. There were also eight subcontracted Tasmanian curators and each event had its own critical respondent. Plus two essays were written for the book by Cross himself and Marco Marcon, the Perth essayist and editor.

Iteration Again had an unusual structure. Each performance (or installation) was presented four times - over a month. As with performance festivals overseas recently organised by luminaries such as Marina Abramovic, the notion of a once-off, uniquely enacted event is often now being questioned. Repetition is now generally accepted as a method, perhaps as a version of theatre or film or publication. If so inclined, performance artists can set up a template for their performance that may be reutilised in another time or place, perhaps with different personnel. Their practice can be scored like a piece of music. Required details may be fastidiously circumscribed, but the event is not as precious as a solo occasion.

For this mainly Hobart-based project the artists could aim at exact replication or they could add and/or subtract various elements over the ongoing four week sequence. They were given the opportunity to think about repeatable (or non-repeatable) details, particularly when and where they could be implemented.

With the recent ballooning of performance’s popularity and its online promotion via institutions like the Tate (as both live and as a videoed document) some theoreticians like David Joselit have come to the fore with discussions of art’s properties as it is perceived via digital media for a mass audience. Looking at performance, questions arise about its nature as a practice. What can ‘liveness’ be now? Is that essential still, as the defining ingredient for performance, and if so, can it be reproduced many times over like a photograph or print?

The two large essays provided by Cross and Marcon are superbly informative about the notion of repetition and its significance to performance practice and its evolution, but the intricacies of the different methods embodied by the thirteen artists are elaborated further in more detail by the thirteen invited respondents. (The website has early drafts that are less polished than the book.)

With this particular collection of accounts of performances, the great contribution I think is from these invited writers, even though their names are not listed on the cover, or even on the contents page - nor is there biographical information about them. These respondents are more important in the long run than the curators who invited the artists - they have a direct personal voice that communicates directly with the readership about what happened. More interestingly they are more candid and on occasion genuinely ‘critical’ than what might be anticipated. The results are not puff pieces and the philosophical reservations the reviewers sometimes have are not ignored. There is an admirable sensitivity, honesty (along with the necessary empathy) in their descriptions and evaluations of the works and their interaction with their publics. Frankly I was surprised at the complexity of their responses, though I wasn’t at their skilled but convivial and accessible writing. I assume Cross himself (an exceptionally gifted communicator) picked them.

Contributors I found especially interesting were Claire Krouzely on Bethany J Fellows’ ‘artificial sunlight’, Mick Wilson on James Newitt’s secession project, Andrew Harper on Marley Dawson and Chris Hanrahan’s motorcycle races, and Bryony Nainby on Toby Huddlestone’s media insertions. The writers I was attracted to weren’t necessarily dealing with artists that I had empathy with - in fact sometimes I disliked the work described (especially if it was too far below what I call ‘the threshold of communicative efficacy’) - but the reviewers account of their own mental processes gripped me, and I was curious about what they considered engaging.

The thirteen works here I think were overall much more successful than the earlier twenty One Day Sculpture projects held in New Zealand. Two Tasmanian works in particular had me really envious of those who experienced them. Anthony Johnson‘s short bus trips, with his meticulously organised cast of pedestrians, window-washers, dog-walkers, cabs, scooters and cyclists, sound astonishing in its repeatable detail, while the motorised ‘sunshine’ and pertinently blaring pop music from Bethany J Fellows‘ The Hobart Urban Illumination Project impresses with its impertinent dawn aggression. With Johnson’s Eclipse, it is such a brilliant idea to have actors playing citizens doing things so boring they are almost invisible - only repetition revealing their presence, paired with the cumulative effects of conversation amongst the bus passengers. In the case of Fellows, I don’t think it is so much the wit of a solar substitute on a Land Cruiser accompanied by an excruciatingly loud musical soundtrack that takes my breath way, but the act of genuine (ie. memorable) disruption in the heart of sleeping residential areas. Even though 15 seconds mischievous disturbance is all each household on the chosen domestic route receives, with light aimed directly into bedroom windows and some suburbs being revisited, it still creates considerable social impact.

There are some oversights in the book besides the lack of biographical info on the writers. For example Paul O’Neill (the influential ‘curatorial artist’) has his work Our Day Will Come featured on the cover, and he brought in nine other ‘international’ UK - as opposed to Australasian - artists, yet the book and assigned commentator are far too skimpy in their discussions of the visitors’ contributions. There should have been addenda in this book giving edited transcripts of the weekly topics What is a School? What is Remoteness? What is Autonomy? and What is Usefulness? - or perhaps the accompanying published magazines. Otherwise their visit looks like a junket cooked up by Cross (and perhaps Doherty) for their celebrity artist mates. If performance can be a public lecture or pedagogical debate (as in this case) then it needs to be argued for, so readers can be persuaded. The discursive content needs to be laid out in the documentation to show the artists are absolutely serious.

Despite these omissions this good looking, well conceived book is an excellent read, one that is accessible whilst also erudite. It deserves a wide and appreciative audience, far beyond Tasmania.