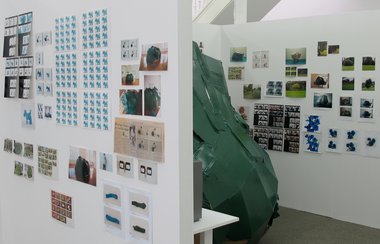 With the display structure, it is almost like the inner partition of a cardboard carton itself, a core you spiral around, studying the outer edges as you work your way inside. You decode the allusions - the ideational kick-off points - of the cut into plastic bags, tottering cardboard and shoe-marked white sheets, then the shrub shaped sculpture, leaning poles and various videos, soon to approach the inner walls and shelves with their lines of photographs and paper dockets.

Richard Maloy
All the things I did

Dominating the large downstairs gallery of Starkwhite the latest sculpture by Richard Maloy poses as an art school submissions partition, a walk around walled structure with six enclosures in which can be placed or hung the documentation of projects. Photos, videos, drawings, and sculptures are displayed in a clockwise sequence, samples of Maloy‘s Elam student activities, starting in 1996 and finishing in 2001, carefully selected from his archives and recontextualised. Items casually abandoned on the floor meticulously link to paraphernalia on the shelves and walls. Photographs, receipts and press clippings dominate. There’s no textual elucidation at all.

Although there is a range of project types here, the dominant mode involves Maloy using his own body as an armature or support structure for a variety of temporary sculptures of cardboard, clay, butter, tin-foil, sticky tape or plastic bags, the gradually developing stages of which he documents with photographs and videos. It is a very different sort of practice from that of the other Auckland ‘body’ video artist Campbell Patterson, whose work is more about time, performance as repetition, and video as a medium - not constructed sculpture or mark making per se, nor an investigation of supports.

The constant presence of his building figure in the lead-up to Maloy’s final form connects with the body as featured in the work of many artists of the seventies, including Jasper John’s prints taken directly from his own face (Skin with O’Hara Poem, 1963), or Painting Bitten by a Man, 1961, or Vito Acconci’s blending of Johns in 1970, when he made prints from self-inflicted bite marks on his arms and legs. Maloy has taken this sort of self referential process and mixed it with the messy hands-on methodology of Claes Oldenburg’s 1961 The Store installation - by using himself as armature, using one part of his body as a support structure for material applied by another. Sometimes the results are only on video film or photographic print. Other times there are portable sculptures.

With the display structure, it is almost like the inner partition of a cardboard carton itself, a core you spiral around, studying the outer edges (what’s scattered on the floor) as you work your way inside. You decode the allusions - the ideational kick-off points - of the cut into plastic bags, tottering cardboard (Oldenberg) and shoe-marked white sheets (Rauschenberg), then the shrub shaped sculpture, leaning poles (Serra) and various videos, soon to approach the inner walls and shelves with their lines of photographs and paper dockets.

The installation itself is a clever synthesis between Maloy‘s large cardboard projects and his videos, a shrewd way of commenting on art history and self-promotion that mixes it into spectacle. It also provides something you can dip into - with limited success because sometimes the photographs are baffling, there’s no traceable logic. Yet even if his intentions were always crystal clear, for my money the over-arching ambition of All The Things That I Did makes it too self absorbed, too fiddly, prim, over complicated and serious, and too hermetic en masse. The best work I’ve seen from Maloy has been the clay/body videos and butter photographs that were shown at Crockford’s. They had a gutsy scale, you could admire his humour and curiosity, there was no revisionist recontextualizing, and they worked because they were witty and also dead simple. They had a happy mayhem and childishness that sang in isolation; an immediacy, an exuberant messy physicality.