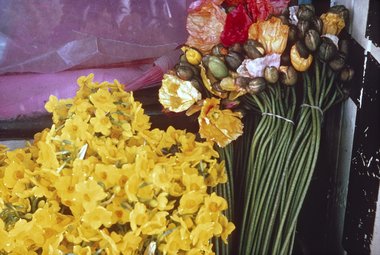 Paul died unexpectedly at 57 almost exactly a decade ago. Apart from a few dedicated collectors her work was never much sought after, and for several reasons. It was usually small, often on paper and domestically related. She worked across a range of mediums - painting, drawing, photography, film, poetry, publishing - and in the market's view that's not versatility but a perceived lack of focus. And she was her own worst enemy in terms of promotion.

Why do dealers show the art that they do? Because it’s “good”? “Interesting”? Saleable? They are businesses after all, and the “saleable” is probably the strongest incentive, even if this might seem a mildly cynical conclusion. For all the grand notions of quality and prestige settling like a fog over the business of dealing, it’s basically about moving product. The unique quality of this particular product is that no one actually needs it. Oh, they might want it, bigtime, but the lack of art is not going to result in fatalities. So, once the fog lifts it’s clear that the basic business of dealing is to foster desire.

The complex dynamic of desire and its fostering would require a book, even if limited to the operations of the art world. Even a focus on mere collecting would cram EyeContact to the ceiling of the blogosphere, and to achieve would take the combined talents of at least Jane Austen, Flaubert and Dostoevsky.

There are few demonstrable, incontestable facts involved in art and its trade. We can establish, in most cases, the name of the artist, the date of the work and its dimensions. That’s about it. Even other facts such as proven provenance and the amount the work last achieved at auction quickly become contaminated by their potential as levers in the next sale. Most of the information swirling around art works may seem factual, but in terms of its contextual use it rapidly becomes contestable as reliable fact.

This yawning gap is concealed by a flexible membrane of reassurance. Reassurance is the trade’s strategy of convincing the punters it has credibility. The flash galleries, their suited and groomed occupants, the glossy catalogues, the hush, the look, the seductive scent of money is a constructed pedigree with the sole aim of inspiring belief, trust and confidence in a milieu where practically every brick is, to some degree, speculation. Given this lack of substance reputation becomes everything: to be promoted, fiercely guarded and stoutly defended. The prevailing atmosphere of cool can rapidly turn frozen for any perceived doubter or social critic. The art critics, though, are mostly tame, and have learnt where their bread is buttered. The catalogue essays get written, the shows reviewed, but there’s rarely any critical examination of the actual processes involved. It’s as if all the surgeons were suddenly on life-support.

Within the dealer system there is a hierarchy. The older, established ones tend to be more conservative, more predictable - thereby risking irrelevance - and more business-like. At the other end of the spectrum there are idealistic young people who believe in their artists, but despite their passionate commitment tend not to last long, becoming victims of commercial reality. In the middle is a Sargasso Sea-like shifting mass of older dealers on the way down, failing to adapt, and younger colts on the way up, suavely steering a course between artist commitment and commercial survival. The money may not be great but they’re warmed by the satisfactions of peer support, sector respect and the prospect of a successful future.

Those in the know are attuned to every nuance in these scenarios. Who’s exhibiting whom, which artists are moving up, which down - what sideways might indicate - where spaces relocate, how a business reconfigures, who’s collaborating, who’s writing the guff, who’s doing the buying, where their stall is at the art fair, do they go to Venice? Where are they eating?

So why is Robert Heald showing photographs by Joanna Paul? He’s known for a very focused, singular taste, usually centred on small, very contemporary works across most mediums by and of interest to his own generation. Since he opened in the lively Left bank off Cuba Street a few years ago the lilies on his desk and their fragrance in the space are one of the few constants and reliable pleasures in the Wellington art world. He’s young enough to take punts and savvy enough to be taking some strategic risks. But risk is risk, and by exhibiting Paul’s work the result may be that either her stocks rise by the association with his gallery, or his gallery’s stocks drop a few notches by his association with her. As they say, watch that space.

Paul died unexpectedly at 57 almost exactly a decade ago. Apart from a few dedicated collectors her work was never much sought after, and for several reasons. It was usually small, often on paper and domestically related. She worked across a range of mediums - painting, drawing, photography, film, poetry, publishing - and in the market’s view that’s not versatility but a perceived lack of focus. And she was her own worst enemy in terms of promotion. Although she exhibited regularly she shied away from any promotional endeavour, and, typically perversely, seemed to actively discourage it.

In 2004, the year after her death, the Wellington City Gallery collaborated with Whanganui’s Sarjeant on a rather hastily-conceived exhibition - more a sign of survivor shock than much of a tribute to her achievement. Beauty, even included some of her books and experimental films - her photography was absent - but was heavily weighted towards her painting and drawing when her sheer versatility was at the core of her practice and a mirror of her life. In Paul’s case the and in the phrase art and life was redundant. Two years after that, Waikanae’s Mahara Gallery published - in association with Auckland University Press - a book focusing on Paul’s drawing practice called Subjects to Hand, accompanying a nationally-touring exhibition of the work. Although widely acclaimed and appreciated, it was a well-considered introduction to a wider public rather than a perceptible stimulus to raising her profile as an artist.

The current Heald show foregrounds Paul’s photography. The period covered - 1976 to 1985 - was a time when, to be taken seriously, you were expected to specialise in one medium. The result was that Paul’s engagement with film and photography was seen as peripheral dabbling in peripheral media. There’s no mention, for instance, of her practice in David Eggleton’s Into the Light of 2006, the most comprehensive account of photography in New Zealand to date. Yet she was part of a conspicuous conceptual shift in the 1970s when young women artists, fired up by the prevailing feminist movement, consciously made art reflecting - and rejoicing in - their own experience, often chosing a fragmentary viewpoint partly in studied opposition to the grand narrative tradition of the patriarchy, an approach which not only welcomed photography and film but included them on grounds of equality. A modest but landmark exhibition Woman’s Art: six women artists was mounted at the former Robert McDougall Art Gallery in Christchurch in 1975 to coincide with International Women’s Year and curated by the Gallery’s exhibitions’ officer Alison Mitchell (since known as Allie Eagle) and one of the six was Joanna Paul.

Appearing as Joanna Harris, her catalogue statements nontheless made a clear case for women’s art, an independent stance and a right to have their work taken seriously. It would be easy to interpret her focus on (indeed, commitment to) domestic subjects as a kind of resignation at odds with prevailing feminist aims of professional independence. But, practically, Paul occupied the space where push comes to shove, knew what the score was and remained determined to mine the richnesses of her daily experience, speaking of her domestic subject matter as possessing “transcendent metaphor”. There were three of her photographs in Woman’s Art. They were each priced at $12.00.

The nine images in the Heald show exhibit all the qualities of Paul’s photography. They are each priced at $2200.00. A suite of five come from the Harris’s Barrys Bay years in the mid-1970s and convey the power of the glimpse when observed by an artist so alert to the world and so attuned to its nuances. A single print refers to a common thread in her work; the pain and beauty of cut flowers. Another to her keen perception of scale and space; a pile of dirt at Akaroa. This is 1976 remember - it was at least another dozen year or so before the work of better-known photographers such as Peryer engaged with subject matter in such a way. And remember too that in 1976 to be working in colour was practically a revolutionary act. Two images from her frequent trawlling of the Wellington Botanic Garden conclude the show and represent with disturbing elegance her use of cropping that owes more to the Japanese print tradition than, say, the Edward Weston school of Modernism. To crop the negative’s information was a Modernist crime: Paul didn’t merely crop the photograph, she cropped the image in the course of its making. Thereby slighting the subject matter and drawing attention to the formal qualities dynamically inhabiting the frame.

Her engagement with photography was not so much the “decisive moment” as the intimate moment, the camera uniquely positioned to register the fleeting that Paul’s project was to nail down, but without any loss of its essential momentariness. Her art of the glimpse was, and remains, antithetical to the grand narratives of both Modernism and its aftermath, and its object is to alert rather than impress, to give pleasure rather than compel admiration. And that pleasure is of a significantly special kind. In a formally “religious” sense her upbringing was an off-hand mixture of a Presbyterian tradition maternally and an agnosticism paternally, but early in her adult life she was initially attracted to Catholicism, but became disenchanted by its prescriptive ethos and tranferred her allegiance to the Society of Friends. Had she lived longer she may well have become Buddhist, because the special pleasures in her work are strongly tinged by a sense of the sacred - the holiness of simplicity and of living intensely in the present moment. These values are far from the concerns of the current art world. Robert Heald is not only very enterprising, he is also bold and very brave.