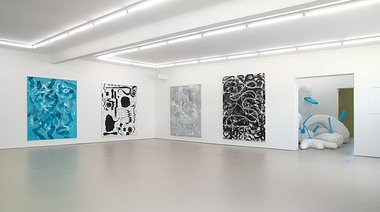 Now the accompanying 'starter' paintings through the wall in the big gallery are presented with the sculpture, alongside a large assortment of drawings and other paintings that are illustrated in the original 2010 Artspace Ack catalogue. As aids to research they are ‘warm ups', spontaneous images made quickly that Robinson eventually found a useful pattern in, a means from which to direct a functioning explorative strategy.

Two shows side by side, one presenting part of the process of geminating the other: both utilising spontaneously raw energy.

The polystyrene sculptural installation known as Ack (2006) has been shown in two versions now in Auckland, and though not as physically overwhelming as say Snow Ball Blind Time (2008) at the Govett-Brewster in New Plymouth, it may in fact be more loved by the public, being rougher and more sensual with its hotwire carving, and more colourful and funny with its blue duckbills and spindly blue kneecaps.

Presented here at Hopkinson Mossman as Ack (re-Ack) this 2006-20013 iteration is much smaller, super condensed and ultra amusing. It has gravitas, a link with philosophy through its duck/rabbit imagery and the associated thought of Ludwig Wittgenstein; Because this small version is not as intestinal as its meandering wormlike precursors, its remarkable compactness makes it surprisingly decorative.

Peter Robinson’s ‘starter’ paintings - next door through the wall in the big gallery - are connected to a large assortment of drawings and miscellaneous paintings illustrated in the original 2010 Artspace Ack catalogue. As aids to research they are ‘warm ups’, spontaneous images made quickly that Robinson eventually found a useful pattern in, a means from which to direct a functioning explorative strategy. Initially making mindless marks and images (doodles with paintbrushes) they eventually acquired sense through the cumulative labour of testing out all sorts of unanticipated possibilities.

In contrast to the crisp clear sculpture his painted drawings and drawn paintings celebrate a calculated puerility and chaotic messiness, an adolescent rejection of adult ‘sophistication’ and repression, a celebration of bodily ‘irresponsibilities’ like farting (Acktion Painting 3). These wildly abandoned, gauche drawings brushed on in paint are in parts reminiscent of the Beano comic artist Leo Baxendale (he created the Bash St Kids) or the television series Ren and Stimpy.

Of the eight large Acktion Paintings, 2006-2008, a decidedly ‘unvisual’ arrangement dominates. It is a disparate, unbalanced assortment. Maybe the sequencing order is chronological: we aren’t told. Process rules - perhaps.

About four of these I could live with: Two (Acktion Paintings 4 & 7) - with soft white-lined images of chains, spindly legs and knobby feet brushed into a wet grey - are successful in terms of their integration of a drawn line into its background field. Nearby a dynamic blue work (Acktion Painting 5), of thick skittery, zigzagging strokes akin to those of Bernard Frize, vigorously activates the space advancing towards the viewer. Plus there is a fascinatingly piercing, black on white painting (Acktion Painting 6) of items as varied as squashed balloons, frog eggs, diamond crystals, zigzagging ridges, black speech bubbles, and clumps of mushrooms - similar to others Robinson presented in Sue Crockford’s a couple of years ago.

The other four served a generative purpose, but as frenetic, doodle-covered objects, they’re forgettable. Failures built into the risk.

The term ‘action painting‘ is the somewhat theatrical masculinst expression created by Harold Rosenberg in the early fifties when discussing the performative aspects of brushing (or dripping) paint while the artist (Jackson Pollock) was physically and mentally immersed in the very large image lying on the ground. It emphasises a correlation between the visible diagonal lines and the sweeping movements of the artist’s body mentally recreated by the viewer.

Robinson’s approach is similar only to a limited degree, in that there is active body / shut down mind in many of the exploratory paintings, while in the glued and carved polystyrene sculpture the mind is more active in the physical shaping, remaining ‘outside’ - but not bodily immersed. His title is witty because it links Rosenberg with Wittgenstein, Acktion with Quack. It is mentally audible and comical.