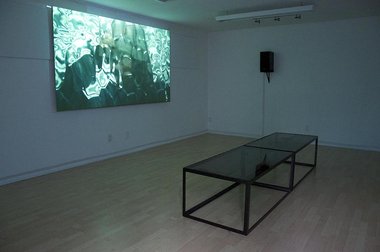 The parallels between the content of the seat and the content of the screen generate a form of wit where eyeball and seated anus become interchangeable in function, as if in some story by the French philosopher Georges Bataille. As for the filmed or encased objects themselves, the purpose of these mainly metallic fetish items is to use their power to enhance the mood of Evangeline Riddiford Graham's narrative and the suggestive nuances of Kirlew's voice.

In this unusual installation a carefully scripted video is projected onto a matt, slightly khaki green screen that has silver particles in its surface so that the image subtly shimmers - as if slightly solarised. On the other side of the gallery facing the screen is a seat of two butted-together glass benches (Window seat #1 and #2) made by Alex Laurie, presumably for viewers. They could be low tables. Their top horizontal surface is of two layers of thick glass, one above the other, with mysterious objects and sticky clear varnish sandwiched in between. Many of those items visually dominate the imagery in the film.

The film, Shy Genius, is made by Juliet Carpenter, the script written by E.R. Graham and voiceover provided by an actor, Akil Kirlew. It has a predecessor, Luma Turf, made by the same people, that was recently shown in the Gus Fisher as part of Girl, Empire, a group exhibition from early May that was curated by Rebecca Boswell.

Here you can see Luma Turf on Vimeo. Thematically and visually it is very similar in mood to Shy Genius, except the image chroma is not so subdued. The colours are poppier - and without the sparkly contours.

Because of the brown-green screen and the subtle solarisation of its surface the experience of seeing this installation is quite unlike the screen images here on this page, for the light in situ is much softer and murkier. In both seat and film we see rail hooks, paperclips, old receipts, pins and screws. In the film alone there are various chains, dog collar clips, locks, bolts, frosted glass sheets, a table cloth and drug capsules, while in the table top there is a ‘natural’ sheep gut condom and (separate) wrapper, a Stanley knife blade, cigarette filters, paper detritus, iphone, and staples.

All this helps form a kind of matrix of logic that sets up a gridded conceptual structure connecting the film imagery with that of the seating. The parallels between the content of the seat and the content of the screen generate a form of wit where eyeball and seated anus become interchangeable in function, as if in some story by the French philosopher Georges Bataille. As for the filmed or encased objects themselves, the purpose of these mainly metallic, sharp and shiny fetish items is to use their aura to enhance the mood of Evangeline Riddiford Graham’s narrative (it’s divided into prologue / play / epilogue sections) and the suggestive nuances of Kirlew’s voice.

Graham’s story revolves around a sexual transaction involving the spoken-to viewer and a confident verbalising hustler, their interaction dismantling different types of masculinity (far more than femininity I think - though there could be a counter argument) and power relations. In the script stereotypical attributes for various sexual types are shuffled around and reorganised in alluded to codings. The speaker is a cowboy queen, a fairy stud where commonplace conventions are flipped over and sadistic /masochistic relationships slyly alluded to. Dominant / submissive, butch / fem roles are reversed within this one way conversation - elucidated here by this smooth-talking, controlling ‘ranch-hand’ with his embossed, high heeled boots and stinging, supple switch.

Graham is an astonishing writer, and her vibrantly intoxicating, ambiguous language (made alive by Kirlew’s performance) really is the star of this exhibition. However Carpenter is obviously a great talent. She clearly knows how to make films that are compelling viewing, and Laurie, sculpture that has all sorts of disturbing associations when thought about over a prolonged period. An exceptional exhibition.