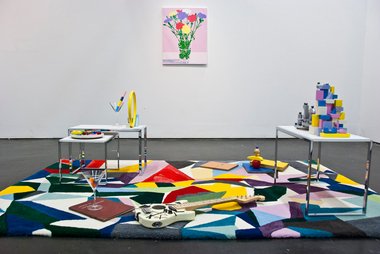 Biennials are often assessed in terms of their theme or curatorial rationale. This exhibition's lack of an overall theme (other than ‘artist run'), meant there was not a lot to contextualise the works or tie them together, leaving the audience to join the dots. While presenting mainly singular works by such a large number of artists with varied practices in this way did not offer much room for in-depth engagement, it did give a broad impression of contemporary Melbourne practice.

The first Melbourne International Biennial Signs of Life was curated by Juliana Engberg in 1999, and featured nearly 60 artists in an eight story building in the CBD. At the time it was claimed to be “the largest visual arts event staged in Melbourne since the colonial World Fairs of the 19th century.” The inaugural Biennial event turned out to be the only one, and was widely suspected of being a financial failure. Engberg has since become known as a key figure in the Melbourne art world. She is currently the Artistic Director of the Australian Centre for Contemporary Art (ACCA) and the forthcoming 19th Biennale of Sydney.

In 2008 artist Christopher LG Hill coordinated the (self initiated artist funded) Second (first) Y2K Melbourne Biennial of Art (& design) at the artist-run gallery TCB. Hill’s take featured a number of young artists predominately from Melbourne, but also several from New Zealand. The discourse around the exhibition at the time positioned it as ‘oppositional’ or ‘alternative’. It was a somewhat anarchic show with works mounted on newspaper-covered walls.

The First & Final Y3K Second (third) Inaugural Melbourne Biennial of International Arts was the final exhibition held at Y3K (a gallery run by Christopher LG Hill and James Deutsher between 2009 and 2011). Compared to the previous edition, this was a more pared back showing, with a more commercial, slick aesthetic and a higher proportion of international artists.

The Third/Fourth artist-facilitated Biennale was concerned with “tying up loose ends, re-investigating and continuing various overlaps, collaborations, conversations and relationships,” and contained much of the same cast as in the previous (artist-led) biennials, many of whom have an extensive history of exhibiting and collaborating together. A number of Auckland artists featured in the exhibition, most of whom have previously shown at Y3K. Likewise, many of the Australian artists have also exhibited in Auckland - for example in ‘Cross Colouring‘ and other Gambia Castle exhibitions.

Kate Newby displayed a tabletop selection of ceramic rocks and sticks and found objects similar to those she has exhibited previously at Hopkinson Mossman. While this collection wasn’t as polished as what she has shown commercially, the rawness and fragility added to the work’s intimacy.

Fiona Connor (in collaboration with Michael Palladin) exhibited A1 posters that documented a local edition of her Newspaper Reading Club Daily. The layout of these posters, in a row that and extended out from the gallery and into the space of the art school was a somewhat literal analogy for the ways she has previously used documentation and publishing to critique and extend the boundaries of exhibitions.

Alex Vivian continued his investigation of the sculptural and libidinal potential of found objects. Vivian’s assemblages marked a move away from sweaty sportswear and classicism toward something more abject. In this case, he intensified his use of vaseline, which was thickly coated to a small range of found objects, creating works that were at once visceral, enticing, and gross.

Though not immediately obvious, detailed minimalism found its way into the exhibition. While readers might be familiar with Matt Hinkley’s small Hanne Wilke-esque sculptures, the finely perforated work exhibited here called to mind Hinkley’s earlier drawing based works. Patrick Lundberg’s painted pin tops displayed a similar level of fine detailing. In both cases these works could have been easily missed by the careless viewer.

The exhibition also featured an exhibition within an exhibition by way of Kenny Pittock’s homage, Chris Hill, shown as part of wider The Kenneth Biennial aka La Biennale di Kennezia - a humorous continuation of the theme. This comprised of a rudimentary fake grass hill, populated with works by artists named Chris.

Next door was a darkened screening room, which featured two monitors and Dan Arps‘ work-(found?) footage of an Occupy Protest displayed on a smart phone attached to the wall. This work suggested a similar sense of social unease and urban failure as in his recent show at Michael Lett. The light and sound blaring from the other monitors only reinforced to this impression. Outside of this screening room a silent Tahi Moore video played on a wall-mounted monitor. Unlike the Arps, sound from other videos here served as a distraction, rather than adding to the work.

The exhibition also included paintings by Trevelyan Clay, Kate Smith, Sean Bailey and Helen Johnson displayed on a trellis hanging system. Generally these were consistent with the type of works audiences have come to expect from these artists, with only Johnson showing signs of a new direction, moving from figurative and political content towards abstraction.

In many ways this show was what audiences have come to expect from Hill et al. There were few surprises from the more established artists, who generally chose to stick to what they are known for, rather than try something radically new. Overall it was a good looking show and (apart from the sound interference), Hill made good use of the space. Biennials are often assessed in terms of their theme or curatorial rationale. This exhibition’s lack of an overall theme (other than ‘artist run’), meant there was not a lot to contextualise the works or tie them together, leaving the audience to join the dots. While presenting mainly singular works by such a large number of artists with varied practices in this way did not offer much room for in-depth engagement, it did give a broad impression of contemporary Melbourne practice. 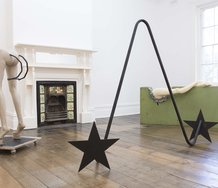 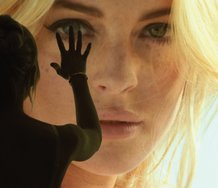 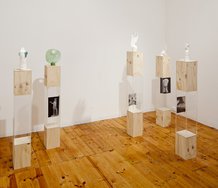 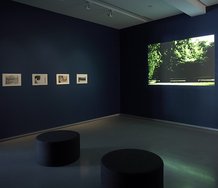