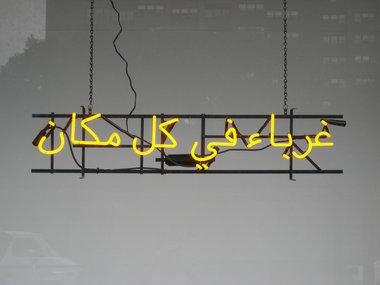 Hou Hanru's considerable experience in top international art world 'jamborees' has for this presentation resulted in something very special. Here there is a refreshing consistency and depth, as well as a salient local confidence in his selection, because of his determined and sincere efforts to grasp Auckland's history and current manifestation.

After running for a fortnight - enough for a taster, even of the continuously problem solving, community-oriented, experimental Lab - the general opinion around town seems to be that this Triennial has a clear edge on its predecessors. Most of us have vivid memories of the highs and lows of the complex thematic shows ably put together by Allan Smith, Ewen McDonald with Ngahiraka Mason, Victoria Lynn, and Natasha Conland, but Hou Hanru’s considerable experience in top international art world ‘jamborees’ and his wide network of contacts has for this presentation resulted in something very special. Here there is a refreshing consistency and depth, as well as a salient local confidence in his selection, because of his determined and sincere efforts to grasp Auckland’s history and current manifestation.

Hou Hanru‘s title for this Triennial, If you were to live here… asks the gallery visitor what steps would they take to improve their daily existence in this antipodean location. It repudiates passivity and attempts to goad the temporary or permanent resident of Auckland into action, providing tools through art, lectures and forums that assist analysis - pointing to methods of potentially creating a better lot for individual and community.

However Hou’s titular wording is slightly odd, and can be interpreted in another very different way: asking the Aucklander, what if they lived in another city (like Tangier or Kosovo) where the visiting artist whose work is before them might live. The problems and issues of the art from overseas - it is implied - may have parallels to the situation now in Auckland. The here of Kosovo can become the here of this town, causing the viewer to mentally oscillate between the two.

And although the utopian drive and political philosophy behind the curator’s overall global vision comes out clearly in his title and essay, one rarely gets a sense of preaching or tub-thumping from the work itself which is often very shrewdly positioned in the space, witty, visually sensual and also highly aural -  music based. The latter makes certain selections emotionally penetrating. Hauntingly memorable; the message subtle.

There also seems to be slightly fewer overseas artists this time and that gives the event more focus, especially when some are appearing in more than one venue. There is no nonmural painting and a lot of photography, sculpture and video installation. Some of the video is very long (over an hour) and requires several visits. More importantly there are now ten venues, the new enlarged Fresh gallery at Otara playing a vital role, and in the Auckland Art Gallery itself, a section called The Lab (what Hou Hanru calls ‘the brain’ of the Triennial) where architectural design, eco-planning and connected social projects are being presented, along with talks and discussion. Allan Sekula and Noel Burch’s film at The Film Archive is also crucial as a contextualiser.

Also noticeable is the increased amount of reading matter available next to The Lab (there are seats) and in the Auckland Art Gallery bookshop. The curator is obviously keen to get information from other cultures circulated and with his array of distinguished speakers and curator/artist panellists on the opening weekend, wishing to get Auckland audiences energetically Googling and exploring online youtube/vimeo lectures - checking out the activities and ideas these guests are admired for.

I hope to write a number of articles on the event over the next few weeks. At the moment I’m trying to get around and explore things - to dig out the various threads that connect thematic hotspots. For those curious, like me, it is a most exciting time for Auckland.

Certainly Mark. I admire Wystan enormously for this review. He tells it straight. A real pro. http://www.art-newzealand.com/Issue110/etal.htm

Can you direct us to some of Wystan's more recent writings that fit this description John?

Well we all know civilized conversation has nothing to do with friendship, and overseas there are some candid critics like ...

John, I look forward to your serialized comments on the Triennial. And I laud your quixotic attempt to get a discussion going in the land of the long white silence. The global art-world I've known has been all too fond of one-way, unquestioned, rhetoric. I prefer the call-and-response you try to catalyze.

"Tub-thumping" description, of the Triennial's centerpiece 'Lab', by Hou Hanru himself (from an interview, conducted by Laura Howard, for The Big Idea).

"Mirroring the strategy of Occupy as a resistance to the hegemonic powers of the capital and its political alliances, along with arts projects at the Triennial, The Lab allows the most pressing questions of our time and our real lives to become the fuel for our intellectual and imaginative machines."

"It’s like a volcano sitting in the centre of the whole Triennial event – one day it may explode, and the effect would be unexpectedly exciting!"

I, I, just can't help myself. Here it is again:

"It’s like a volcano sitting in the centre of the whole Triennial event – one day it may explode, and the effect would be unexpectedly exciting!"

How can a fellow like me even hope to compete with that sort of hubristic, universe-swallowing, aesthetic-unified-field-theory?

Occupy? really? Occupy, Mr. Hanru?
Radical Chic is too outdated a barb for that magnitude of syncretic reach.

How about ... Radical Cheek?

Well we all know civilized conversation has nothing to do with friendship, and overseas there are some candid critics like Claire Bishop and Dave Hickey who bravely shake the tree - as do Peter Ireland and Wystan Curnow here.

In the end however it is the brilliant artists in the Triennials and Biennales who get remembered, not the curators or critics. The thrill that great art provides (it's emotional impact) is what etches the names of these princes and princesses into art history and the consciousness of the public.

Can you direct us to some of Wystan's more recent writings that fit this description John?

Certainly Mark. I admire Wystan enormously for this review. He tells it straight. A real pro.
http://www.art-newzealand.com/Issue110/etal.htm