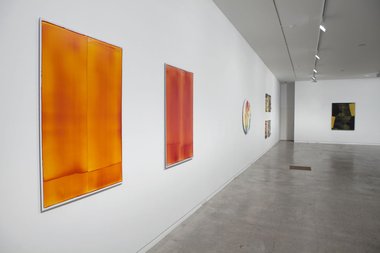 It is exciting to see Wealleans juxtaposed with Harding, but Shin, Ivanoff, Appel and Beattie sit together slightly awkwardly - even if most of these artists hold their own in contextual isolation. It is a good idea to invite Rohan Wealleans to participate as it initiates a discussion about Auckland painting in general, away from partisan gallery ‘stables' - but it needs to be pushed further.

The six painters in this downstairs Two Rooms show, as the title suggests, investigate the thickness, the material depth of paint as part of the layering process built into their practice. There is a real range with some contributions incorporating solid chunky pieces of dried paint, pinned down, others very thin, squeegeed liquid colour - with underlying support peaking through. This exhibition is Painting Two, its predecessor Painting One occurring in September 2007 with two of its artists resurfacing in the current show.

One of those is the English artist, Basil Beattie. He’s in the back room, probably missed by many visitors, with a very large painting with images of three stacked up car windows - or mirrors. Beattie likes a thick line to draw with, one deliberately crude and lacking in sensitive nuance. His work has an overbearing brutishness, much like say, Schnabel, but this coarseness has a strange in-your-face appeal, an unrelenting and dramatic matter-of-factness indifferent to viewer affection. It’s physically and psychologically imposing; hard to ignore, its grossness is almost oafish. Somehow this clunkiness works.

Another English contributor is Alexis Harding, internationally famous for his exploitation of chemically incompatible grids of shrivelled paint placed on slippery supports - that fragment and slide downwards compelled by gravity; or else migrate across, around and upwards, pushed by the artist’s agitating hand. His thickly encrusted, torn and wrinkled surfaces are both square and round, dark and pastel, and celebrate compositional instability. The pale tondo, with its restlessly scrunched up, colliding surfaces, wispy traces and colours of a beach towel, is the star of this exhibition.

The three Harding works flank a suite of four Rohan Wealleans paintings, wall reliefs where chunks of rubbery laminated paint have been gouged out to leave flat shell-like patterns, carved projecting crystal-like prisms added, and earlike flaps of flexible paint skin folded back and held with mapping pins. Wealleans’ marbled craters and decorative pock marks are so distinctive, his mock-primitive ‘cave’ or barklike surfaces so raw - with their harsh colour combinations and organic shapes - that they accentuate the sweetness of the nearby Harding paintings, and seem related to the ‘roughness’ of the whopper Beattie in the next room.

Los Angeles painter Kevin Appel makes use of thin white paint to methodically cover over large sections of photography and with a grid of ordered white discs, create an implied negative grid. The rectangles of white spatially advance or provide screens of bands or dots for other components to peep through - and are often compositionally, adventurously lopsided. There is a static ambience within these paintings, quite different compositionally from the more restless (in my view superior) paintings and drawings exhibited at Two Rooms five years ago. These are more akin to his collages, and despite his risktaking, are a little lacklustre.

Within Jeena Shin‘s suite of five canvases there are two works different from the rest, with greater tonal variation. They feature pale forms set against dark, with twisting/turning grey negative shapes enclosed within the pale positives. This provides more spatial depth, with the angular forms clinging less to the picture plane, and making the hovering spiky shapes more prone to narrative interpretations such as birds or aircraft. However the three more tonally consistent works are more spatially cohesive as objects - and as such, more satisfying. Their tonal matching draws your eye in to carefully scan the canvas surface, zeroing in on tape ridges and minutely built up paint thicknesses. You think about the lighting, and if daylight illumination spasmodically coming from the entrance will bring out further nuances of shape buried in the grey.

Overall it is an odd show; not altogether successful. It is exciting to see Wealleans juxtaposed with Harding, but Shin, Ivanoff, Appel and Beattie sit together rather awkwardly - even if most of these artists hold their own in contextual isolation. It is a good idea to invite Rohan Wealleans to participate as it initiates a discussion about Auckland painting in general, away from partisan gallery ‘stables’ - but it needs to be pushed further.