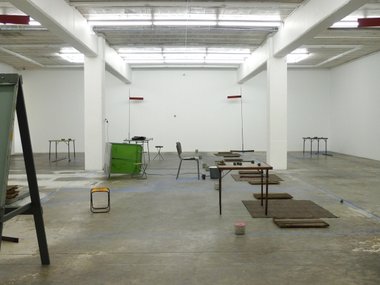 The dominant theme seems to be that of gridded board games, content that could be about life style and economic fortune, art careerism, or global imperialism. There is a suggestion of some sort of tournament of race games like Ludo. We find gridded up card tables, mud coloured putty counters, and small weathered pallets for two players to sit on. Preparation for a competition.

So what to make of this? Despite the Parekowhai name at the start of the artist announcement, we see in the gallery that the et al. aesthetic clearly dominates, making it possible to think of In collaboration with Anya Henis and Samuel Holloway as a solely et al. show: a sly merging of the Parekowhai moniker as a new et al. artist-brand that Mike P. somehow has been charmed into. But that is being unduly imaginative: too mentally convoluted. In fact this really is an et al. Parekowhai collaboration, with partnership-based works as well as solo items from each. Plus, as the title says, contributions from Henis and Holloway.

For ambience, et al. audiences are used to a certain oppressive claustrophobia but instead, with Lett’s usual dividing wall gone, this presentation is oddly agoraphobic. The stud seems higher than usual. The light excessively bright.

Nevertheless much of what we see has links to earlier et al. productions like That’s obvious! That’s right! That’s true! (2009) and No free gift (2009): especially the taped out or chalk-stringed rectangular zones on the floor; the occasional collection box on a board; and the typed out charts with taped on pastel/chalk drawings. The latter bear provocatively teasing expressions like ‘re-education of personal opinion’, ‘stirred by the winds of objectivity’ or ‘utopia denied/utopia restored’, mixed with more serious references like village architecture and the earthquake in Tashkent.

The dominant theme seems to be that of gridded board games, content that could be about life style and economic fortune, art careerism, or global imperialism. There is a suggestion of some sort of tournament of race games like Ludo. We find gridded up (and circled) card tables, longer folded-up tubular tables, mud-coloured putty lump counters, small weathered pallets for two players to sit on, painted mats in the centre of each of the four rectangles (for rolling dice on?), concrete territorial corner markers, chairs and stools (for referees?) and grey blankets draped over metal stands. Preparation for a competition.

Four seems an important number. A suite of four zones is encased by four obliterated corner street signs, Parekowhai has provided cast bronze coffee cup lids (dice shakers?) that are displayed up on the four walls, and one drawing refers to The Four Prophetic Visions. Et al. seems to be suggesting that the Gods do indeed play dice with the universe - though we don’t see any dice, anywhere.

Here et al. is typically ambiguous, and Parekowhai‘s bronzes contribute to that art unit’s humour of striving for interpretative credibility each and every possible way, while adding to the games theme. His cast table legs (sans tables) have his own distinctive brightly saturated colour, yet they still seem et al.ish - no longer functional, just useless objects to contemplate, laugh at, or poke things with. Similarly his bronze golf balls (also non-collaborative) with strips of rumpled rolling carpet become mini-golf courses with no clubs provided.

Other stated collaborators are Samuel Holloway (composer of the music for three performances on a grey upright piano: visitors can hear the tinkling of a keyboard coming out of a plastic bucket, spliced in with the sound of water pouring out a high pressure tap) and Anya Henis (designer of the show’s poster images: a triangle containing two competing arm wrestlers, and a ‘solidarity’ circle of stacked up, pledging hands).

Now if I can indulge in a little speculative mental riffing, there is a curious paradox here for a show that declares a hierarchy of collaborating participants: firstly Parekowhai, secondly various hidden et al. identities (with Parekowhai, stated as artists), thirdly Henis, and then Holloway (both wittily inserted as titular elements). If we remove the implied sequencing it then levels out to become et al. et al - or ‘and others and more others’. Like the putty lumps, a muddy merging and obliteration of difference.

As et al. shows go, as I’ve pointed out, this one is quite different, having lots of air and light. (It could almost be wholesome.) Very unlike say, the more subterranean trans-cryption of a couple of years ago. Being a bit of a troglodyte myself, one who prefers damp caves and night-time, this show for me doesn’t quite resonate. Not enough oppression, paranoia and crazed furtive scurrying.