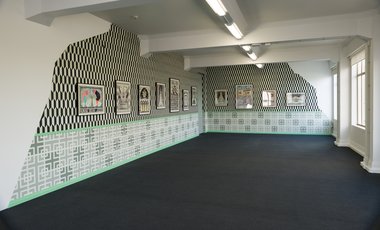 The CAG has put together a commemorative event like no other and this is no doubt due to a combination of curatorial intention and practical necessity. As a public arts project, the emphasis in Populate! is on murals, gallery exhibitions or large-scale reproductions of artworks rather than sculpture, a decision probably made by necessity.

Has there ever been an arts event or anniversary project to commemorate the opening of a public institution like Populate!? Curated by the Christchurch Art Gallery (CAG) and launched to mark the opening of its building on Montreal Street ten years ago this is a public arts programme characterised by unequivocally ‘low-brow’ images - a rogue, mutant arts festival - one that has seeped out of the cracks and ruins of Christchurch’s central city, occupying its empty streets and abandoned buildings.

Like the city itself, Populate! is a work-in-progress with projects closing and opening through to late June. (Populate! was officially launched on 10th May, but Sian Torrington’s and Mark Braunias’ contributions are pending). Populate! also feels like a project that the CAG could never have imagined undertaking ten years ago. It is worth noting that the public gallery has only been open for eight of the past ten years, closing 22 February 2011 and relocating to temporary exhibition spaces, primarily at 212 Madras Street and 209 Tuam Street above Aliceinvideoland, as well as commissioning public artworks on and in various exposed walls and empty spaces of the inner city.

What might the Christchurch Art Gallery have gone with for a 10th anniversary if its building was still open?  A series of commissioned works by selected artists or a limited edition print publication? Typically, these are the kind of responses from public galleries for such occasions, taking up the opportunity to eulogise their histories with appropriate milestones and in so doing, reposition their brand in the professional art gallery and museum world. With the CAG not due to open until 2015, the gallery can be forgiven for making its ten years in business a subject equally worthy of due attention. Director Jenny Harper has commented that prior to 22 February the CAG was anticipating visitor numbers of 700,000 per annum, building on the momentum of record attendances for shows like Ron Mueck in 2010-2011.

It is not difficult to empathise with the CAG’s frustrations, implicitly evident in Populate! as an Outer Spaces project. In its title Outer Spaces promises business-as-usual, yet with an accompanying mixture of optimism and unintended melancholy. Outer Spaces fills the city with art by defining its location beyond the comfort zone of the CAG’s inner spaces - the public gallery on Montreal Street. Essentially, the CAG is as frustrated and weary as every other business, community, organisation and individual in Christchurch with the perceived lack of progress on the city’s rebuild. In 10th May 2003, no one could have imagined Christchurch in its current state; ‘red zone’ then meant Manchester Street where local prostitutes conducted their business, insurance companies were considered the protector of family and business assets, liquefaction didn’t exist as a word in the popular vernacular and 70% of the buildings that made up the inner city were still standing. So Populate! is a particularly welcome arts event and one that could only have been cultivated from extraordinary circumstances.

In it the CAG has put together a commemorative event like no other - no doubt due to a combination of curatorial intention and practical necessity. As a public arts project, the emphasis is on murals, gallery exhibitions or large-scale reproductions of artworks and not sculpture, a decision probably made by necessity. Planning consent and insurance are not straight forward tasks in Christchurch and it must have been more pragmatic to paste images on exposed walls, than address the complications of occupying sites with three dimensional works.

In the attention it gives to the potency of images to communicate beyond mere objectivity, Populate! is sharply curated, for its selection of artists (Ronnie van Hout, Mark Braunias, Steve Carr, Roger Boyce and Kay Rosen) reveals the seasoned presence of CAG’s senior curator Justin Paton. Although the question can be asked, why does Populate! feature a list of artists who have often graced the CAG, it works near perfectly: a cohesive series of works characterised by confronting yet oblique narratives, humour, irony, a subversion of the principles of human behaviour and an awareness of the pervasiveness of popular culture. All these elements make it well-suited as a means of communication for a public programme.

Populate! ticks almost all the boxes, seeming to reassure the city that it is now more alive with activity, and in so doing, further normalising the current state of Christchurch. No need to pretend it’s a disaster zone - Populate! is more than pleased to work within such an environment, occupying it with the kind of recently arrived tenants and visitors that are more at home in a post-apocalypse world.

Many of the participating artists are well served by this premise: Joanna Braithwaite’s appropriation and reinvention of animal life as anthropomorphic creatures has always seemed clever, yet it has also struggled to connect in a more profound way. With its scale and location on the bunker wall of the CAG’s Montreal Street site, however, Lizard Lounge becomes something grander and more perplexing - a convincing argument to give Braithwaite’s recent work more attention.

Peter Stichbury‘s imposing portrait, NDE, located high on the CAG wall on Worcester Boulevard, also demands a reconsideration of his practice. Within the space of an art gallery, Stichbury’s air-brushed portraits have always positioned themselves with an ironic take on the vacuous promises of marketing and advertising, communicating with a knowing awareness to an all-too cognisant audience. Scaled as a billboard and glowing in the night-time darkness outside the CAG, Stichbury’s iconography sits indeterminately between fine art painting and advertisement. It seems disturbingly comfortable as both, signifying unease and a wisdom that in his practice was previously less evident. (Populate! also features a number of other works that come to life at night. For those prepared to negotiate the inner city’s evolving trail of orange road cones and road blocks, there is Tony Oursler’s Fist on Gloucester Street and Steve Carr’s Majo on Worcester Boulevard).

Walk into the gallery space at 209 Madras Street and you will feel the sublime presence of Jess Johnson‘s Wurm Whorl Narthex, an installation by an artist who understands the potency of images, yet seemingly for all the wrong reasons. Felt pens, obsessive compulsive making, raider-of-the-lost-ark details, Freudian psychology, Egyptian hieroglyphics, M. C. Escher on LSD, and Windsor McCay and Little Nemo in Slumberland all exuberantly meet and merge as one. Johnson assembles a body of open-ended images and narratives where joy resides in the very act of seeing.

Yet to be installed, but keenly anticipated, Mark Braunias’ Groove Zone Shuffle is a proposed large-scale mural of orchestrated loony-tunes. The working drawing promises a public work that is lyrical and charming. If Walt Disney ever had serious pretentions to see his cartoons elevated to the realms of Fine Art through movies like Fantasia, Groove Zone Shuffle would have made him green with envy.

Such works are well positioned for both general public consumption and dedicated arts audiences. Inevitably, to achieve such ends irony plays an important role in Populate!‘s successful delivery. It’s a challenging task to ensure an appropriate degree of sincerity while meeting the needs of a high number of agendas, and in a work like Gregor Kregar’s Reflective Lullaby the delivery may have proved just too demanding. Two large mirror-polished stainless steel gnomes located either side of the gallery entrance on Worcester Boulevard, benignly welcome visitors. Humorous, and overtly kitsch from the School of Jeff Koons, the paradox is too heavy-handed, grandly parading the bad-taste of the working-classes on a scale outside the recognised guardian of good taste. The brevity of the joke and the contradicting scale on which it is implemented, all tends to implode upon itself.

Populate!‘s success in diverting attention away from the constraints of living in a city in ruin is however, somewhat open to question in its decision to make reference to its permanent collection which will remain inaccessible to the public until 2015. Populating the city with reproductions of well-known portraits serves primarily as a reminder of their ongoing absence from public view and the CAG’s current and seemingly enduring closure. It is primarily in their location in the inner city that the best of these works manage to come to life and seem relevant to Populate! For example, Michael Smither’s Portrait of My Mother looks like a photograph of a favoured and regular customer outside a now empty chemist shop in Cashel Street.

Also drawing on the public collection of the Christchurch Art Gallery is Face Books, an exhibition of books on display at the temporary public library in Peterborough Street. With illustrations by Eileen Mayo, Tony de Lautour and Richard McWhannell all displayed appropriately, its success resides in presenting works by artists that are rarely exhibited. In the attention that Face Books accords to limited edition publications, prints and works on paper it is a reminder of the limitations of curatorial practices that perpetuate a hierarchy in the arts. Curator Peter Vangioni feels it necessary to highlight this in his introductory comments pointing out ‘an artist (who is) prepared to bring his practice as a painter directly into his work as a book artist.’ If Populate! is an outsider or rogue festival of the arts then Face Books is a welcome contribution, emphasising a need for much greater generosity in curatorial practice.

Face Books, like much of Populate! sets up a challenge in difficult times, complementing an engagement with rarely seen works on paper with works that draw from popular forms of art like comic books, Hollywood cinema, advertising, horror movies and geek culture. Paton has taken the opportunity to spread within the city the kind of images that rarely get much attention in the ‘serious’ art world, particularly in arts festivals. Populate! sidesteps the obvious ambitions of such events, suggesting that there are other interesting ways in which the arts can meaningfully engage audiences.