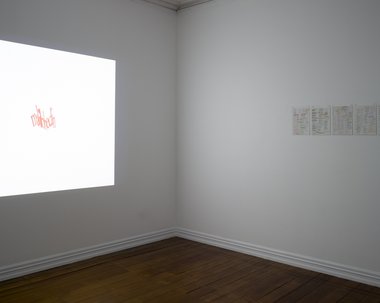 Part of the humour of this show is that Leonard undoubtedly sees parallels between himself (as an unabashed art nerd) and Cooper. That empathy extends to the artists he has selected, creators of works that are obsessive or excessive in some way. The chosen work usually has an interest in science.

News has been out for several weeks now that at the beginning of next year exArtspace Director Robert Leonard will be returning to Aotearoa for the position of Senior Curator at Wellington’s City Gallery, after an absence from these shores of almost eight years while working as Curator/Director at Brisbane’s IMA. His return is awaited with considerable excitement, not only because of his considerable experience as a curator but also because of his brilliance as a writer and off the cuff speaker when analysing New Zealand contemporary art history.

This show Bazinga! (a partnered project between IMA and Starkwhite) gives a good indication of some of his curatorial interests. Ever since he emerged as an intern in the mid-eighties Leonard has always had a passionate interest in the mass media, especially television, so it is no surprise that this exhibition’s title comes from the main personality of The Big Bang Theory sitcom, nerdy and autistic science buff, Sheldon Cooper - it’s his gloating exclamation of triumph when verbally outscoring a flatmate.

Part of the humour of this show is that Leonard undoubtedly sees parallels between himself (as an unabashed art nerd) and Cooper. That empathy extends to the artists he has selected, creators of works that are obsessive or excessive in some way. The chosen work usually has an interest in science, but not all.

The 2008 performance videos of Danielle Freakley take the famous quote from Roland Barthes that “texts are ‘tissues of quotations’” to an absurdly literal level. Like an actor, but using the information in a range of unpredictable but prosaic situations, she learned by heart a vast number of references from assorted books and films that she could spout off at will in any face to face encounter. In daily conversation, in every sentence, she rattled off these references without pause, like footnotes, to the baffled (non art academic) people she talked with. This was a three year project, and she no doubt created confusion and exasperation everywhere she went, even when not being filmed. (This is assumed. We really don’t know how much post-filming editing is involved - if at all.) The nuttiness of her project seems driven by art careerism, and not a satire of a certain type of art-fixated intellectual.

Gabrielle de Vietri’s audio work CAPTCHA, 2010-2 exploits those guardian online puzzles in cursive we have to decipher and state to prove we are not robots, when entering a new site. Because they are nonsensical but rich in association she has created a series of four short stories that range from science fiction and fantasy to romantic soft porn, inserting the CAPTCHAs as key nouns and verbs. The humour comes from the artist researching and listing these bizarre ubiquitous devices, and then exploiting their potential for suggestive or fanciful interpretation. The reader’s nuanced intonation, accompanied by a shrewd background string soundtrack, and projection of the CAPTCHAs as used, is crucial for the emotional impact on the imagination of the listener.

Like Freakley and de Vietri, Antoinette J. Citizen revels in the confusion between humans and robots, but set in the context of the Sims computer game where participants build the characters themselves and the scenarios they are placed in. So players can supervise the mental and physical well being of their characters, they observe ‘health bars’ that monitor ‘energy’, ‘hunger’, ‘fun’, ‘social’, ‘comfort’ and ‘hygiene’. Citizen however has built such a unit for herself (Human Needs Meter, 2011), to be strapped on her wrist so she can keep track of her own health. Because we as mammals have an autonomic nervous system that keeps us automatically informed of our daily needs at a level that is rarely conscious, Citizen’s gadget is delightfully perverse. It implies we are cybernetic machines that have to use technology to grasp our own biological and social requirements.

Another work from Citizen is a fake letter to the artist Sean Kerr from the NZ Security Intelligence Service, signed by its Head, Warren Tucker. He is inviting Kerr to participate in a project (Project Alpha) where all of the world leaders are relocated to the moon in light of the earth’s deteriorating climate.

Looking at television once more, Stuart Ringholt presents five edited clips from the American sci-fi television series Star Trek that mischievously mock the politic of curator/artist relations. Captain Kirk (played by William Shatner) is here labelled in the credits as a curator, a figure of fun presented in many moods. These result from his interactions with various colleagues or encountered aliens in dramatic situations; where his expressions range from impassivity to confusion and distress. Ringholt seems amused by notions of curatorial control - perhaps futile - in either the organisation of exhibitions or their interpretation.

Daniel McKewen’s noticeboard, Conditions of Compromise and Failure, 2011-2 analyses the cast of all the episodes of all the series of the television production The Wire, placing photographs and character-name into thematic communities and work places. There are a dozen taped off partitions on the fibreboard, such as the FBI, the schools, the docks, Standfield Org, and the New Day Co-Op., and most of the small pinshots have coloured threads (eight symbolic hues) connecting to other photos on the board. An enormous amount of research seems to have gone on, analysing the script and relationships in detail, detecting references to characters involved in previous or future episodes.

The blue monochrome by Rebecca Baumann is in fact one of those flip-board mechanisms you regularly find in airports, but with each of the rotating 192 (12 x 16) modules having 6 chromatic variations. The whirring boards seem like falling leaves, toppling cards or fluttering wings, as if a creature that is alive. Personally I find the 6 variations a bit monotonous. Incorporating 1152 kinds of blue would have made a more interesting and unpredictable statement, though the limitation does accentuate the kinetic drama.

Fixational Eye, 2011 Ross Manning‘s carefully lit, whirling piece of string in a darkened room relies on a DLP video projector that beams up red, green and blue light in rapid succession, but which lingers in our vision so we see them (plus white) all together as they hit different parts of the string. A mesmerising vortex, it sucks you in as if symbolising the nature of obsession itself.

Botborg make live sonic and video works where projected signals are twisted into flickering fragmented and buckled patterns, accompanied by excruciatingly loud distorting feedback. Fixated on the occult ideas of the Russian scientist Dr. Arkady Botborger (a friend of Wilhelm Reich) and his invention of the Photosonic Neurokinaesthetograph, these techno-boffins performed in the large Starkwhite gallery on opening night - setting the theme for the exhibition.