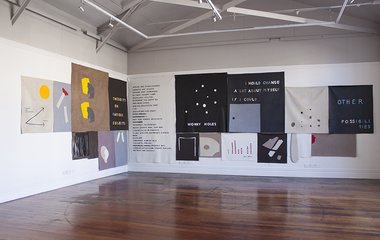 ‘If worries were things, like worms for example, I expect they would burrow right into you.’

Let me begin by congratulating Christina Read on the least pretentious artist statement I have seen in some time. Artist statements are often riddled with pseudo-scientific vernacular; a hangover from tertiary education and the need for academic essays to authenticate empirical facts. Lately I’ve noticed a bit of kickback to artspeak online, as though the world has finally had enough.

Read writes in the first person. Her language is plain. There’s no hiding behind theory or abstract terminology. She begins by describing her need to quantify the hours she spends working on each show, then plunges into an anecdote about arriving home after the holidays to find a possum caught in a trap in her back garden. Her paragraphs make imaginative leaps. Read’s statement takes the viewer further into her show, deepening the mystery.

Language is her material. She uses it as a scrap. At the opening Read told me she only wrote sentences. I said that was enough. But she does shopping lists too. Other Possibilities is an exhibition that takes texting to a different plane. At Enjoy her wall hangings were arranged around one corner of the gallery. The show looked like a series of notes. One leathery wall hanging read: thoughts on various subjects, another: I’d change a lot about myself if I could. Read’s charming hand cut letters reminded me of homemade chips. Black, white, grey, cream, beige. Suede. Vinyl. Many of her textiles wore no text at all. I found myself staring at the various shapes on each canvas as though they might coalesce into letters of the alphabet, then turn into words and I could decode the language. Each wall hanging functioned like a post it note, a memo, a giant jotter’s doodle, something one might happen to find under a fridge magnet, like a shopping list.

Read’s shopping list is mildly aspirational. When almond milk is on the menu, I feel like I know who I’m dealing with. Her internal dialogue is self depreciating, but she’s not showy about it. There’s no bile here. She is interested in the slipperiness of life and our attempts to put it into language and art. Read also (as previously noted by a string of other writers) has the perfect surname for someone who is making art including text. Her work reminds me of Miranda July, Indie filmmaker and author of No One Belongs Here More Than You. There’s a similar sense of humour, a feel for the absurdity of ordinary things; the artist at toil in the midst of the mundane. Read’s work remains affable if elusive. Various thoughts take shape. Sometimes only half thoughts. Like half a word left hanging. Read’s shopping list is presented as a work in progress. Tantalising, yet abstract.

Read also exhibited a visual tally of the hours she spent working on the exhibition. This work honed in on the tension of trying to quantify and qualify experience. Her use of textiles and text is both specific and vague: she separates the signs from their signifiers. In Read’s diagram dreams and aspirations point in one direction, reality in the opposite direction. This work is funny because it’s true. Her artist talk at Enjoy was pretty funny too, elaborating on the theme of self help. Her talk included a slide of Paul McKenna, hypnotist and author of motivational bible; You Can Change Your Life In Seven Days.

At the centre of Other Possibilities my favourite work was a large black canvas spotted with holes. The worries have had their way with things yet again. Somehow, I’m not that worried. I often use the word cute to describe artworks and ideas. Cute is of course a banished word from contemporary art critisism, but you know what? I thought this exhibition by Christina Read was pretty damn cute. Just as a book of fiction might be subtitled ‘and other stories’ or a collection of essays might offer ‘thoughts on various subjects,’ words burrow in and out of Read’s art, suggesting possible narrative threads. (Thoughts on Various Subjects is an essay by Jonathan Swift.)

In one wall hanging I deciphered the hips of a possum caught in a trap. The other possibility is always - arrestingly - just out of view.

The show that you wanted to make, but in the end this one had to do.

The review I wanted to write, but…