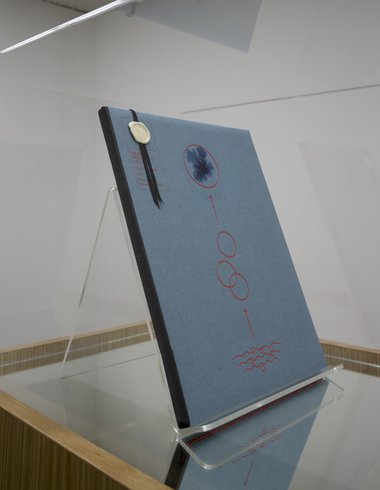 Beyond the obvious talents of Randerson and Bain, there is a clear sense that this work plays off on the porous borders of what drama (and art too) can be, on the difficulty in determining where ‘life' ceases and ‘cultural' contrivance begins. Perhaps the real actors are Caterina Riva and her team - and not Stephen Bain at all - the ‘play' being more in the catalogue and website than in the rehearsed activity we see on the gallery floor, or accompanying displayed objects.

Goldin+Senneby is a Swedish art collaboration who, in this concurrent Auckland/Dunedin project, examine aspects of stock market speculation and profitmaking formulae: methods with split timing in share buying (looking for hints of immanent merger and acquisition [M&A]) and selling (just before the rapid descent after the peak). Simon Goldin and Jakob Senneby present rehearsals of a short play inspired by the eighteenth century Swedish King, Gustav III, who secretly employed a mineralogist (August Norsdenskiold) to discover an alchemical formula for producing gold.

Ostensibly Gustav III wanted the potential wealth to help defeat Russia in a war, but secretly his aims were wider - he wanted to destroy ‘the tyranny of money’ by eliminating gold’s rarity. Ostensibly there are two components to G+S’s show. One is a commissioned play, written by Wellington playwright Jo Randerson, where the rehearsals are presented.

It is about 25 minutes long and Auckland actor Stephen Bain runs through the script everyday - while interacting with visitors. The austere set (designed by Anna Heymowska) is changed regularly, consisting mostly of machinery and furniture drawn on the floor with coloured tape. Randerson’s entertaining script is rich in asides, exasperated investor head-banging, ‘interruptions’ where visitors assist by ringing the actor on set cues, and various puns connecting daubs of crimson oil paint with loss (‘in the red’). We never see signs of profit (‘in the black’).

The second component is a ‘Merger Prediction Strategy’, an algorithmic share buying and selling formula provided by Paul Leong, an investment banker. This forms the apparent basis of the exhibition’s off-stage continual trading, using funds from the exhibition’s ‘production budget’. Profits gained are used to employ the actor, so the use of Bain’s labour in the gallery is in thrall to the success of Leong’s formula, used here for the first time, starting on the day of the exhibition’s opening. The trading procedure has been installed by Ybodon, an anonymous computer scientist.

However we never see any palpable evidence of these invested funds, no printouts or running online statistical program on any computer. Such a presentation would have been immensely engrossing. However there is an elegant blue dossier, shut and sealed behind glass that Artspace claims contains the buying/selling formula used to sustain the play.

When you think about it logically, no company would ever make such an equation public (its success relies on secrecy), so that we cannot read it is understandable. However the fact we cannot watch the results of the use of the ‘magic equation’ on a computer, examining their market progress, suggests that the very existence of the Strategy is likely to be one big ‘creative’ lie.

After all, if the profits cease coming in to continually fund Bain’s employment, then that means he is out of a job and there’s no more theatre for gallery visitors. If it is successful and is a surefire profit making formula, this would link it with Norsdenskiold’s research. Such potential ‘money on tap’ would generate a cash cow for the artists, more work for Bain, and maybe considerable media attention for the gallery. And as Gustav III knew, as a formula that never fails it would eventually undermine the international fiscal system and destroy capitalism.

In another room is a pile of M&A scripts in manila folders on a table. These, visitors can take home, to study Randerson’s words and Goldin+Senneby’s ideas in detail at leisure. On one level though, beyond the obvious talents of Randerson and Bain, there is a clear sense that this work plays off on the porous borders of what drama (and art too) can be, on the difficulty in determining where ‘life’ ceases and ‘cultural’ contrivance begins.

At the beginning of the play, Bain methodically taps the gallery walls, suggesting in this ‘art play’ that they symbolise the semantic parameters for art itself, those porous edges I’ve just mentioned. In view of the lack of transparency with the use of the Merger Prediction Strategy, perhaps the real actors in this production are Caterina Riva and her team - and not Stephen Bain at all - the exhibtion’s ‘play’ being more in the catalogue and website than in the rehearsed activity we see on the gallery floor, or accompanying displayed objects. The contextualising material and the art it refers to seem to have switched roles.

This ambiguity bounces off the role of the pursuit of profit on the share market, the value of ‘stability’, the presence of fantasy, the crucial importance of public perception and media image. It focuses on the slippery intangibility of the speculative endeavour, especially with so many overlaps and parallels with art (as idea or commodity) itself. This is a subtle and intriguingly rich exhibition that reveals more ideas the more you look into it.

Thanks for the update, Stephen. It is a shame we have only the artists' word that their investment strategy exists, ...

Hi John, thought you may be interested to know that Goldin+Senneby sent me an email at the beginning of last ...

Hi John, thought you may be interested to know that Goldin+Senneby sent me an email at the beginning of last week to update me on trading and to call an end to performances (the last being 13 April).

I hope it's not inappropriate to quote them from their email, I don't believe the secrecy around the strategy extends to their post-trading assessment.

"We've had a weekend conference call with Ybodon to oversee our trading status. In theory trading has gone pretty well. The strategy seems reasonably useful, although the duration of this trading experiment is a bit too short to seriously evaluate. In practice, however, it has been disastrous... mostly due to implementation issues and bugs in the code that triggered some unexpected run-away trades, missed "stop loss functions", inter-exchange database incompatibilites and unexpected FX costs."

One final 'rehearsal' will take place on Sat 20 April at 2pm, where I will be the guest of Artspace, as opposed to an employee of Goldin+Senneby.

Thanks for the update, Stephen. It is a shame we have only the artists' word that their investment strategy exists, and that the curtailing of your employment was not premeditated all along.