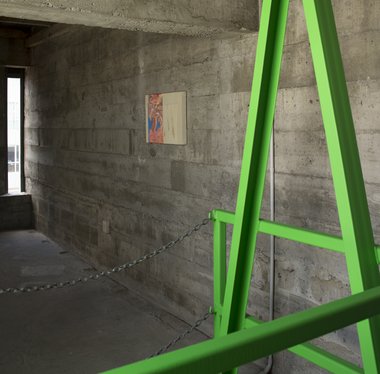 Another vital element is the metal hoist above the closed trapdoor in the middle of the room, painted bright fluoro green. A couple of daubs of the same hue are on an adjacent, turbulently swirling, umber-based landscape, mixed in with masked off gestures above a diagonal vector that could refer to the hoist, as well as to triangular folds of canvas on other stretchers, and perhaps sheltering rooftops.

Heidi Brickell
A Ghost on a Coat Hanger

If you are a habitual explorer of Artspace’s mezzanine exhibiting loft, this time when you nervously climb up the long ladderlike steps you will discover the current display by Heidi Brickell: an installation in which the crucial components are five differently sized paintings. Though not all the canvas stretchers have much paint on them, the work can also be seen as a five part (but single) work where the elements are cleverly positioned apart; the stretchers (all of which have glued on strips and squares of size covered fabric) present on their surfaces geometric, masked off, sections of vigorously applied paint.

The impetus behind the work seems to be the gaping mouth of one of the two hapless lions in Delacroix’s The Lion Hunt (1861). Roaring piteously its painted open maw is empathetically referenced as negative space in the two ‘landscapes’ (dominant blues or pale greens) and two ‘portraits’(strident reds and fleshy pinks) within this suite of images, most of which are vertical rectangles. With their incorporated canvas strips, they also reference the concrete walls of the space with the textured indentions of the setting horizontal boards. Four are hung on the walls (one with a shelf above it), and the fifth leans against the wall balanced on a makeshift trestle made of metal school-desk legs and chunky wooden offcuts.

Another vital element is the metal hoist above the closed trapdoor in the middle of the room, painted bright fluoro green. A couple of daubs of the same hue are on an adjacent, turbulently swirling, umber-based landscape, mixed in with masked off gestures above a diagonal vector that could refer to the nearby hoist, as well as to triangular folds of canvas on other stretchers, and perhaps sheltering rooftops in a hostile environs. In fact the hoist’s supporting frame of beams (the central hook of the title’s ‘coathanger’- the lion being the ‘ghost’) is crucial because with the five stretchers it creates a 2 x 3 grid where the six units provide a dense web of diagonally traversing cross connections. There is a sort of anthropological structuralist matrix in the floorplan of this narrow room where signs for nature (raw) and culture (cooked) jostle in abutment and nod to each other across the space.

In her contributing Artspace blurb, curatorial intern Alex Davidson writes at length about Brickell’s preoccupation with ‘the specters of animals’, but my impression from Brickell’s choice of frenzied and bloodied skin colours is more a Baconesque (or early Jeffrey Harris) human content - hinting at the feral and ferocious within us all. Sure we can see echoes of the open leonine mouth with protruding tongue and teeth in almost all of the works, but these creaturely, mammalian allusions have a quality of being more wild and convulsive human portraits, the others focussed on landscape with deliberately ‘uncompleted’ sky, tree and hill forms.

What’s attractive about Brickell’s project is its mix of intellectualism with signifiers of impassioned feeling. It is not tediously dry or listless (as some cerebral art can be), but deconstructs painting inventively with a sensitivity to her audience. It draws them into looking closely at the detail of her marks (individually and collectively as shape) and their location - on the picture plane, in the room. Illusory and real space are used coherently. In terms of art history the exhibition is also a witty flipped-over joke about the Fauves (instead of ‘Wild Beasts’ these seem more ‘Wild Humans’), but with a knowing, mediated ‘rawness’ of hand gesture, and a knowledge of the history of stretched canvas as an artisanal, portable and marketable support.