Pushing the Envelope with Nick Austin 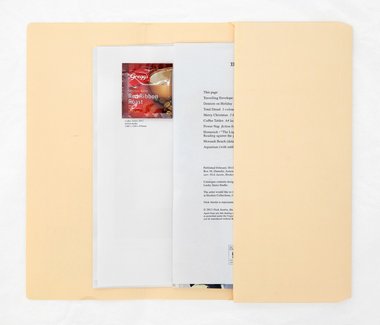 Austin is a wonderful artist to write about because his work provides many narrative U-turns and possibilities. The Liquid Dossier isn't stationary; it flows between artist and audience. Austin's stream of consciousness ripples with good humour. Metaphors and meanings abound. Jokes are shared.

Published February 2013 by Nick Austin and Hocken Collections, University of Otago on the occasion of the exhibition The Liquid Dossier.

Last Friday I got mail, a package in the post, unexpected and interesting. Not a bill or an invoice, but a manila folder entitled The Liquid Dossier.

The Dossier contains ten items, including:

• A DVD entitled Dentists on Holiday.
• A postcard of one of Austin’s Travelling Envelope paintings.
• A Warehouse stationary envelope containing three photographs.
• A poster pull out, featuring an essay by Natalie Poland, Reading Against The Grain.
• Power Nap, a work of fiction by Jon Bywater.

My dossier is edition 21 of 200. Even so, it felt personal. I opened the folder and sifted through the contents. At first I thought it was an (elaborate) invitation to an upcoming show. I read the enclosed handwritten note from Hopkinson Cundy. The gallery had my attention. I never get ‘real’ mail anymore. The dossier is an artist’s edition, a footnote to the exhibition that concluded Austin’s Frances Hodgkins fellowship.

When I saw Austin in Dunedin late last year, I looked around his studio and said, ‘you like envelopes, don’t you?’
‘Yes,’ he replied.

Titles roll off his works like punch lines. Dentists on Holiday is a joke. A sequence of fit men and women ride the waves of beautiful beaches on jet skis. The soundtrack is upbeat, a frolicsome track, punctuated by the whine of a chainsaw. In this context the sound of the chainsaw becomes the roar of the Jet Ski frothing the sea. I found this work delightful. But what would a dentist think? Would he/she feel bemused or outraged by this clichéd vision of uninhibited wealth? Perhaps it would just serve as a reminder to book that flight to the Caribbean? At the Hocken the video was projected in front of a dental chair. This DVD could not have been made by someone in the habit of riding a jet ski.

Austin holds low status domestic objects in high regard. Put the kettle on and put your feet up. In my dossier a sachet of Gregg’s Red Ribbon Roast is stapled to a sheet of A4 paper. Beneath the sachet I discovered a small image of a sculpture. The coffee mug has grown to epic proportions in Austin’s work, overwhelming the small tables on which it sits. Has down time got a bit too much? Or perhaps the oasis of another fifteen-minute break looms large? In Austin’s visual vocabulary household objects discard their utilitarian uses and dream. The envelope becomes a window out of the routine.

A solitary car travels along a long/or winding/or long and winding road. The stylized, simplified landscapes in the Travelling Envelope paintings remind me of the opening credits to Postman Pat as the camera pans through the made up country side, following the red Postie van. I’m somehow swallowed straight back into my childhood. In each image the travelling envelope is personified standing alongside the highway, its pink arm extended, presumably attempting to hitch a ride.

The envelope is Austin’s grid and like Mondrian he is ever capable of extracting some new configuration from its geometry. Total Dread is terminally cute: the print of a shark fin seen through the window of a sealed envelope. Austin awakens the sea inside the post. In the past he has used the envelope as a template to flirt with abstraction. He can never submit to purely formal concerns however, he’s too good at making representational works that are potent with allegory. The shark is a portent of doom; in this instance it’s easy to imagine the circling grey fin as a dental bill.

Austin employs techniques and materials more commonly associated with children’s art activities. The dossier contains three photographs of a large yellow shoe that is a children’s slide in the Dunedin playground, Marlow Park. The photos were developed at The Warehouse (where everyone gets a bargain.) I inspected a close up of the painted flowers in the shoe’s window. There was an old woman who lived in a shoe. Lived in a shoe, she didn’t know what to do. Investigating the flowers in their dappled hues, my mind slides irresistibly towards the work of Frances Hodgkins…

Goldfish drift across the surface of a newspaper article about a Frances Hodgkins work found in a skip. A Rubbish Story is about an artwork found in the rubbish that is now an artwork made out of rubbish. The title is also a quip about quality. Austin’s goldfish lap the tiny circumference of the local art scene. I can’t help but feel Frances been taken down a notch. Perhaps the anonymous artist who painted the shoe at Marlow Park was influenced by Hodgkins? It’s possible, but not plausible.

In Reading against the Grain, Poland describes the MacGuffin: a plot device in literature and film of unexplained significance. I first fixed on the envelope as Austin’s MacGuffin. In a world that’s gone digital the envelope seems a particularly obtuse talisman, old fashioned and out of step with the times. But the real MacGuffin might actually be Austin’s fascination with the Italian artist, Georgio Morandi. Morandi Beach is an installation that elaborates on the genre of the still life, a timeless subject in art. Grainy reproductions of still life etchings by Morandi lie beached along the sand on the gallery floor. Has time’s tide smothered Morandi? Or has his work washed up on the frivolous shore of those diabolical dentists? Jon Bywater’s text Power Nap contains several references to the life and work of Morandi. This piece of writing doesn’t attempt to illustrate anything about Austin’s oeuvre; instead it jogs alongside the exhibition and hitches a ride, just like the travelling envelope.

Austin is a wonderful artist to write about because his work provides these narrative U-turns and possibilities. The Liquid Dossier isn’t stationary; it flows between artist and audience. Austin’s stream of consciousness ripples with good humour. Metaphors and meanings abound. Jokes are shared. The MacGuffin remains as mysterious as Morandi. Other art writers have likened Austin’s work to poetry. The rules of humour are analogous to those of poetry. Both involve timing, precision and rhythm.

Review fades out. Tide laps the shore. In the distance, the roar of a jet ski.