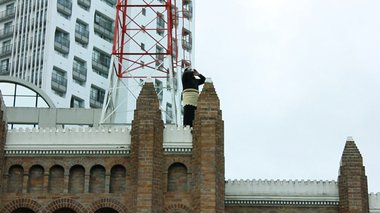 Each project focused on attracting communities not traditionally associated with contemporary art and performance to their site - Pasifika peoples for More than we know; the diverse population of residents, workers and students for Rosebank.

Recently the Auckland Arts Festival ‘Visual Arts’ section presented two site based group events by Auckland artists: Rosebank: artwalk / sitework curated by Marcus Williams (running for two days); More than we know curated by Ioana Gordon-Smith (running for about a fortnight). Both appeared to address the two dominant goals of the festival: to engage with the cultural landscape of Tamaki Makaurau and to attract wider audiences. While this can assist with educating the public about art, it does not guarantee going beyond that - without careful consideration almost anything can be shown.

Each project focused on attracting communities not traditionally associated with contemporary art and performance to their site - Pasifika peoples for More than we know; the diverse population of residents, workers and students for Rosebank. Because both events had a large number of works, some on at the same time, making it hard to experience them all, I will respond only to what I saw. Furthermore I need to disclose my close personal connections through my family to both sites - especially for Rosebank, where I grew up and they lived from the 1920’s until recently.

At the opening of More than we know in the former TVNZ studios, 1YA radio station, and now University of Auckland’s Kenneth Myers Building (with the Gus Fisher Gallery within), this iconic symbol of Palagi/Pakeha culture was responded in situ through Pasifika performance. The event began with Kalisolaite ‘Uhila’s work Uiaki fono (Town crier) where Siliga David Setoga (representing the Tautai Trust), dressed formally in a white lava lava (as if going to church), hit a metal pipe frame with a pipe rhythmically for nearly an hour outside the main door. It sounded like a church bell continuously ringing, reverberating off the surrounding buildings, and also from a distance as though someone was working hard hammering on a building site.

This played with some of the cultural stereotypes associated with Pasifika people as a blue-collar church-going other, particularly in the context of the surrounding white-collar university complex. When Setoga stopped, ‘Uhila emerged dressed in black, balancing on the roof high above him, summoning people in Tongan to enter. It also attracted a number of bystanders and viewers from other buildings.

The Va, or in one sense the collective social experience, was further emphasized by the way we were led inside by Setoga. He gave an even-tempered, ritualistic welcoming to the event by leading us slowly in a circle around the main lobby while greeting us in Samoan. This walking trail we were now a part of mimicked the elaborate circular art deco ceiling, reminding me of the form of a kava bowl, with participants as the legs and the floor as the kava. Gordon-Smith, ‘Uhila, Setoga and Jeremy Leatinu’u were also choreographing us into their experience of what it means to explore a colonial building from their position as Pasifika, before attempting to install artworks - a reminder of how such participation can allow viewers to experience performativity through being directed to topographically trace a location.

We were left to face Leatinu’u’s video installation Spatial Resonance. It was a kind of spatial loop with this building, with him percussively slapping corners that were concealed from the public yet which cost millions of dollars to renovate over a decade ago. While Leatinu’u may appear on the surface to be pointlessly mucking around, he was playing on the cultural stereotype of the ‘happy-go lucky’ Polynesian, historically until recently an outcast in institutional locations like this.

Turning to Rosebank: artwalk/sitework, its vast array of works posed the challenge of being located along the spread-out car and factory-infested self-named road on the Patiki peninsula - much like the post-earthquake wasteland of the Christchurch CBD. Williams and the artists energetically engaged with the local church, primary school, businesses, factories and ecosystem, and mainly produced object-focused work.

Fioana Jack and Salome Tanuvasa’s It is better to have known than to be forgotten spoke out against the greed of land developers by giving a mounted photograph to the local church (my old family church) of two ancient trees saved by the local community, one a pohutakawa, the other a last reminder of the orchards along Rosebank Road, many of which my own family owned. The artists presented a text on these trees, repeatedly read out all day.

For me the irony here was not lost because the photo and performance was situated on the opposite side of the room as a tapestry of The Last Supper made by my great grandmother, the person who perhaps more than anyone contributed to the current landscape of the industrial zone. She sold her land to developers whom she said were good Christians, and she gave the money to the Church. Of course my reading is personal, but Jack and Tanuvasa’s work is timely - especially with the current government seeking to override environmental concerns in the Resource Management Act in favour of property developers. They are likely to have these trees cut down, despite the resistance of many in this church.

Julieanna Preston’s performance Moving Stuff gave us the chance to talk to her while she - using a rather long rope - continuously swapped crates from the road with polluted mud from the Whau Creek bank concealed by factories approximately 500 meters away. Humourous as this was, she nevertheless emphasised the damage this industry and road-runoff has done to the local environment.

Other works stimulated significant public exchange. Janet Lilo’s video installation Factory Jam of some local factory workers practicing their band leaked sound for about a mile radius, not unlike the noisy factory floor guitar-jangly transistor radios that have for years filled this landscape.

Nick Spratt and William Hsu’s participatory postage project By the time it arrives it might have already been forgotten on the free buses played on the migration of the kuaka (godwits) between the shores of Rosebank and China, Korea and Alaska. Punters were invited to post airmail letters designed by Spratt and Hsu and printed by a local firm, Croxley, and to wait for six months to get an environmental update from the artists. Their publication was reminiscent of the now out-of-press aerogram, reminding us of how it postage faces the potential of extinction, not unlike the kuaka who will not return to these shores in six months if humans continue to prevent them.

There was also Kathy Waghorn’s mobile pedaled laboratories in The Fluid Cities (TFC) where scientists examined the water quality of the local waterways, shedding light on the harm we cause to the ecosystem.

Aspects of The Everyday Collective’s Cabbages, horses and science; Rosebank narratives and the F4 Collective’s Penny a Pound activated historical-political readings of the area. We were invited in a vacant tyre shop to read a wall text of Marcus Williams’s childhood where his family would pay to pick tomatoes in the 1960s in a local orchard, while being invited to make a donation and take a tomato - raising money for a local community gardening project. And we were shown film footage of three old talkative bachelor brothers, now passed on, the last of the orchardists in the industrial zone. I knew them personally 25 years ago as their milk-boy.

Lonnie Hutchinson’s Kei te aroha au i koe (I love you) was a white neon sign on black, with these same words in a circle, camouflaged up high among other signs at a car scrap yard, beside the signage of other firms. While a dedication to the conservation work around Patiki, its whenua and moana, it also read as a warm gesture to those who see it while passing by. It spoke of the tangata whenua of Patiki, who in many respects have themselves been long camouflaged within the surrounding colonizing industry and suburb.

As these works showed, the conceptual depth of Rosebank; artwalk / sitework generally lay in the act of socio-politically and ecologically engaging with local communities. However, many other works appeared out of their depth in terms of engaging in situ as contemporary public art. They did not advance beyond the level of illustrating a picture or discovery. The festival had set them up to conceptually trip over, due to publicising the whole event under visual art and as ‘site work’. It seemed almost arbitrary where and how a number of these other works were situated.

Critical insights in Rosebank: artwalk / sitework were also often more productively generated in the social engagement caused by many artists being present to talk about their work, especially with Williams encouraging punters to walk and explore a suburban/industrial location that had never seen public art before. In all of its colonized history, who would have thought Rosebank to have art-goers cruising around it and talking about art?

I wonder if this use of Kwon is still a bit vague. Isn't her use of 'site specificity' emphasizing the ...

Some food for thought here is how Miwon Kwon suggests that contrary to what the notion of ‘site specificity’ implies, ...

Some food for thought here is how Miwon Kwon suggests that contrary to what the notion of ‘site specificity’ implies, there is no right or wrong way with making public art in sites, but a sense of contextual engagement that can create a sense of dialogue and conceptual discovery in relation to the events presented and the locations they are created in and for (2004: 30-39). My reading of 'Rosebank' and 'More than we know' is influenced by this.

Despite traversing Rosebank for 4 hours, I was not able to see two of the other performances set around Orchard Street and the workshop.

I wonder if this use of Kwon is still a bit vague. Isn't her use of 'site specificity' emphasizing the relational rather than say the formal, spatial (in the physical sense, not social) or architectural? Earlier site specificity still had a social aspect but now it is overtly political. And I'd like to suggest there probably are right and wrong ways of making public art in these sites. What if an artist were to make performances unabashedly endorsing the actions of land developers?

Readers wishing to check out Kwon's discussion in detail can look at:
http://doublesession.net/indexhibitv070e/files/kwononeplaceafteranother.pdf

Certainly John, my reading of Kwon is vague here and my reading of her writing is that it calls for work and the reading of work that shifts and shuttles through readings and insights and is not fixed on any one notion of that which is correct or incorrect. From what I've read of her writing she calls for an awareness of the social, cultural and political in art and it's not as simply as a relational thing, as formal considerations are mixed with socio-politico-cultural stuff. Of course, I may have missed something by her (it's been 2 years since I worked through her writings) and I confess that I approach this and read her writing through having read lots of Derrida in a past life.

And as you point out too John, there is a marking out of what is correct and incorrect through this call - and I have read the works in these 2 shows in this way. 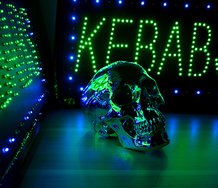 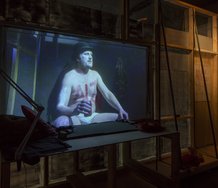 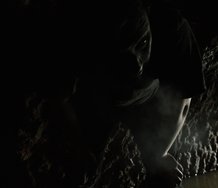