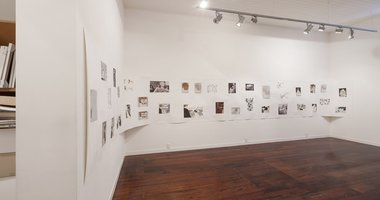 Maybe it is the Buddy Holly spectacles, strangling ties and stiflingly conformist suits that make you feel sorry for them as they soullessly pry into the mental development of innocent growing boys. Maybe Hurley is having a prolonged dig at some educational psychologists he experienced as a child.

Like a unravelling Telex tape but much wider with no holes, we see this cleverly devised scroll by Gavin Hurley wrapping itself around two of the walls of Melanie Roger’s space; assorted images - some improvised in the gallery - made of cut-out coloured and textured paper are glued to its surface. Loose and wonky, they from a distance appear to be cut from fabric or thin felt.

With these collages it is natural that one thinks of antiquated technologies like Telex: many of the images feature robots or primitive computers, part of the humour which revels in mad scientists creating doll-like human playthings. The forces of repression are at work, or even purely societal and impersonal powers (in a poststructuralist sense) manufacturing the pliant subject as if on an assembly-line. There is a whole host of interpretations linked to these images, ranging from sinister thought police who probe rebellious minds to record dissenting inclinations, to surveillance teams and government agents searching for free-thinking fugitives.

On the other two walls are a couple of large paintings that also feature Hurley’s characteristically droll and stiff portraits, but with thin lines delicately incised in the wet flat paint. They too radiate Hurley’s charming gawkiness, yet it is the scroll that really fascinates. This is because the unframed images are for sale and will be cut out when the show comes down. The curly and wide, very long sheet of paper and its rhythmic frieze of images will be destroyed.

One can only speculate how the artist will do this because it will take considerable finesse to get the cropping and compositional balancing done well - especially with works that include much ‘blank’ paper.

Not all the imagery on the scroll is ominous. There are lots of lighthearted gags, particularly some involving male vanity and hair loss. These are sculptural reliefs with skeins of wool-like cotton, carved out cornrows and transplanted lines (a la Elton John), or else tussled shagpile, wavy, thick and frantic.

Hurley has a big interest in shape, like other painters such as Eion Stevens and Denys Watkins, but with the occasional lightness of touch and satirical edge of Saul Steinberg - though downplaying the linear. The nerdiness of his scientist /computer boffins gives them a vulnerability that makes them oddly appealing even though they represent negative controlling forces.

Maybe it is the Buddy Holly spectacles, strangling ties and stiflingly conformist suits that make you feel sorry for them as they soullessly pry into the mental development of innocent growing boys. To guess, Hurley seems to be having a prolonged dig at some clinical psychologists or educational researchers he perhaps experienced as a child, rather than making a Foucaldian comment on the acquisition of knowledge or power. He is extending some private meaning to produce a wider political significance as today’s individual subject becomes more and more at the mercy of government alliances and global networks.