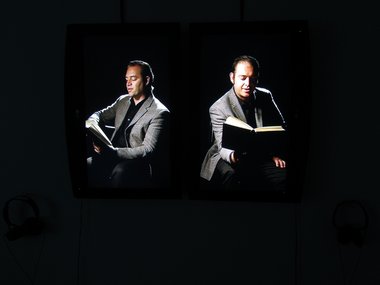 Pohio notices how obliging and courteous the Melbourne drivers are, always letting each other into gaps in the traffic, promoting a fluid ‘currency of good will'. In Brisbane on the other hand, thinking about collegiality in terms of jobs and employment opportunities, he observes things are competitive and highly compartmentalised.

This is a much smaller version of a show Jenny Gillam and Eugene Hansen - two lecturers at Massey - organised for The New Zealand Film Archive in Wellington. It is about half the number of works but displayed elegantly in the Film Archive in Auckland, the small gallery next to Artspace. (Note: a program of Hollis videos is also being presented in Viewfinder at the public library). In this Film Archive K’ Rd iteration of Te Hiko Hou / The New Electric, Shannon Te Ao (with Iain Fregley) and Rangtuhia Hollis have a projected video each on the end walls, while in between Nathan Pohio has a two channel work on monitors with two sets of headphones.

There is a sort of spatial logic to the projections as well. The Te Ao/Fregley work (with landscape format) is above ground looking down, the Rangituhia Hollis video is likewise above ground but also underwater (a mythic ancestral realm), while Nathan Pohio’s chatting self portraits are frontal /side profile, juxtaposed.

The two large, horizontal, end projections are referencing local Maori oral traditions. One is based on a proverb, where - as pointed out to me here by Anna White after a review I wrote - the octopus is scorned for succumbing to death easily but the feisty hammerhead shark is praised for putting up a fight - so becoming a post-colonial symbol of resistance, particularly with issues such as land, water and language. The other draws on the story of the explorer Rakaihautu who is said to made landfall at the Waimea Estuary at Whakatu (Nelson) at the top of the South Island and created the mountainous and flat landscapes with his bare hands as he moved south.

The first shows a variety of sharks circling around above Manukau City and harbour, radiating beams of light (Wisdom? Knowledge?) - while the second shows Te Ao acting out the role of supreme creator at the estuary, slapping and patting the mud into shape, gouging out riverbeds with his heel, and gathering up gritty sludge to build mounds that he then flattens.

The third work from Nathan Pohio deals with more specific time periods (February and November 2010). Dressed like a stock agent (to cityslicker ‘arty’ eyes he looks ‘rural’, a touch of the agrarian) the artist cultivates the ambience of a fleeting visitor to the Big Smoke. His conservatively attired body contrasts dramatically with Te Ao’s comparatively unclothed and practical appearance as he (the ‘Native’) strides through the sticky estuary mud, or Hollis’ cruising sharks as alarming but benign representations of ancestors.

In his videos where he is reading from accounts written into a thick notebook, Pohio tells us about his conversations with a couple of migrant taxi drivers, one while travelling from Melbourne airport into the city, and the other when travelling from GOMA to Brisbane airport - and recorded while pretending to be filming out the cab window. Observing his Melbourne driver’s road behaviour, Pohio notices how obliging and courteous the drivers are, always letting each other into gaps in the traffic, promoting a fluid ‘currency of good will’. In Brisbane on the other hand, thinking about collegiality in terms of jobs and employment opportunities, he notices things are competitive and highly compartmentalised. The structure is rigid with uncrossable barriers so that your professional and vocational identity is fixed.

In the gallery hand-out Pohio’s piece is referred to as having a ‘deadpan irony’, and I assume that it is referring to his dress, not his anecdotes. His verbal delivery is slightly hesitant and not slick: he occasionally stumbles in the way that a professional actor wouldn’t, giving himself an appealing vulnerability to accompany his softspoken sincerity. Hollis’s work on the other hand is very polished while Te Ao’s actions - filmed by Frengley - seem almost totally improvised as performance, although there is clearly a preplanned mental list of bodily interactions with the estuary silt. The three works resonate well - so convincingly speaking to each other that you get drawn in to explore connections.