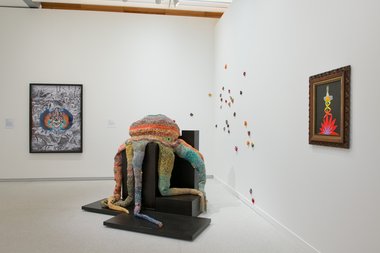 The most obvious pairing is where the coloured centre of 'Empire (Beach)' a Gavin Hipkins photograph of an engraving showing the death of Captain Cook, is repeated in 'Fresh Eke (Eke Nui and Babies)' a large knitted octopus by Ani O'Neill. This witty comment on history and Cook's colonial legacy juxtaposes O'Neill's Cook Island octopi against his demise - to play European death and Polynesian birth poetically against each other.

In Partner Dance the 34 acquisitions displayed on the top floor of the revamped Auckland Art Gallery, works representing 28 New Zealand artists, have been acquired over the past 25 years for the Gallery Collection - the result of hours of sustained conversations between curatorial staff and the Patrons supporters group who generously offer to provide purchasing funds.

Despite involving three curators, it looks surprisingly cohesive as a hang, the selectors working impressively as one mind to position the assorted strands (Māori, Pasifika, ‘mainstream?’) of sculpture, painting, installation, photography and video, lots of really nice juxtapositions that highlight pairings, dialogues based on formal properties or conceptual content.

Though there are plenty of works here you could spend considerable contemplative time with, as imagined solo items in isolation, singly in one room - Richard Killeen’s Know This Place (1993) is one good example with its interest in hybridity, through capture by enclosure, tangential merging or translucent overlapping; l. budd’s the story of is another, with its sardonic rebuttal of Joseph Kosuth, puns on the ‘radiation’ of individual genius, and knowing self-insertion into the displayed, blank, myth-making narrative - I am fascinated by some of the pairings one discovers (or mentally creates) as one wanders through the five inter-connected rooms.

The first most curatorial obvious pairing in the exhibition is in the room where the coloured centre of Empire (Beach) a Gavin Hipkins photograph is repeated in Fresh Eke (Eke Nui and Babies) the very large knitted octopus by Ani O’Neill. The single mother cuttlefish squats on a black plinth but her thirty woolly little infants are scattered on the walls behind her. Nearby Hipkins’ appropriated engraving shows James Cook’s death on a beach at Kealakekua Bay in Hawaii in 1779, overlaid with a colourful tantric Buddhist God, the Judge of Death, a fiery skull with swirling horns and serpent. It’s a witty comment on history and Cook’s colonial legacy and juxtaposed with O’Neill’s Cook Island octopi, uses his name to play European death and Polynesian birth poetically against each other.

Next door, Phil Dadson’s Polar video, Echo Logo, shows nine individuals walking around in front of the Canada Glacier ice edge enjoying the echoing of their shouts, vocal clowning and stone banging/grindings. Along the gallery floor nearby we can see Mary-Louise Browne’s Ouroborus (1990), a line of fifteen word-bearing granite slabs. The textual sequence (dead, lead, lend, land, lane, lone, love, live, hive, have, hare, here, herd, head, dead) with its single letter jumps, forms a loop that when laid out horizontally is also an echo, while others aurally repeat in close juxtaposition.

The middle series of words have a strange sense of emptying out, a dematerialising effect suggesting copious space (lone, love, live, hive, have) that coincidentally reflects Dadson’s icy landscape, a separation between speakers and replying (but distant) frozen wall. Browne’s granite is also fortuitously ‘alluded’ to by Dadson’s grinding and bashing pairs of rocks, enjoying their aural textures and physically manipulated material sensation.

Then in the last room there is the unusual coupling of works by Peter Robinson and Julian Dashper, both 3D, both jumbled forms dominated by hot saturated colours positioned on pale grey planes: one a composite conglomeration of several canvases butted together on the wall, the other a motley boatlike installation on the floor; one with thick globs of paint referencing the Guy Ngan Mural in Auckland’s Bledisloe State Building, the other an island of floating photographic detritus symbolising the global network of the late twentieth century, its surplus imagery, contradictory messages and wasted resources unpredictably spiralling out of control.

Images of young Maori women feature in works by Lisa Reihana and Michael Parekowhai. Reihana is represented by two photographs from the Digital Marae series, one is which is Diva, an assertive chicly attired ‘babe’ standing confidently in a see-through blouse and hot pants, with a raised arm, and Parekowhai by a huge sculpture of a despondent ballerina in a black leotard lying face down on the floor. The two figures speak of the female body, celebration and despair, revealing vibrant emotional extremes, expressions of success and failure.

The last pair is from Brett Graham and Bill Hammond. Graham’s Te Hokioi is a cast iron Nighthawk F117 stealth bomber (reduced in scale) and covered with distinctive rauru spirals linked to carvers from Te Tairāwhiti, Hauraki and Tainui, an indignant response to the 2007 police raids on Tuhoe. On the other side of the gallery is W.D.Hammond’s Buller’s Table Cloth, his scornful condemnation of Walter Buller’s mass slaughtering of huia, again using winged imagery (but instead of being a weapon, dead creatures inert and lying limp on a table) to excoriate what is commonly perceived as imperialist arrogance and irresponsibility.

There is a lot to think about in this show, and in terms of layout, it is a refreshing contrast to the crammed exhibitions on the very bottom floor. It has a really nice feel to it, with lots of surprises. Hats off to the Patrons. These are excellent contributions to the Collection. It’s a summer treat.