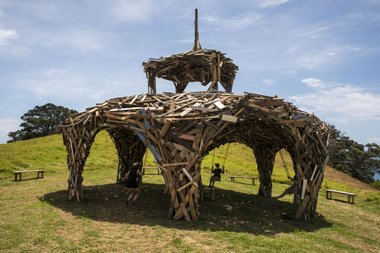 There is a large amount of dross, for alongside the Kregar, only about a third is memorable. These works by McCracken, Price, Gentry, Akehurst, Cribb, Ellwood, Ferguson, Organ/Peerless, Williams and Moon transcend looking like sculpture that happens to be plonked down in a gorgeous setting. They are interesting projects in their own right, works inseparable from their locations.

HEADLAND: SCULPTURE ON THE GULF

Outdoor sculpture - as an art genre - seems to be a category in itself, clearly separate from interactive social sculpture or ‘white cube’ gallery sculpture. Placed in a rural or urban landscape it is often completely overwhelmed by its environs and without impact, so there is an argument that goes, forget the notion of subtlety, this art needs to assert its presence and physically dominate, either through size or shrewd positioning. Such as what you find on the Gibbs Farm.

So when you have a place like Waiheke Island that is plainly beautiful, known for its deep blue water and gently undulating Matiatia Bay coastline, why would anybody bother to look at sculpture? Such work would have to relish nature as respectable competition and take it on headfirst. And indeed in headland Sculpture on the Gulf some does, such as Gregor Kregar’s Pavillion Structure that Rhana Devenport very sensibly awarded the $20,000 Lexus Premier Award to. Kregar’s sculpture is a revamped extension of a work he recently did in Te Tuhi using building scrap off cuts, but with added minaret and swings. It is exhilaratingly striking and fearlessly conspicuous.

The best of the other 29 works though are more nuanced, clinging to hillside or path contours, or referencing the conventions of rural architecture. There is a large amount of dross, for alongside the Kregar only about a third is memorable. These works by McCracken, Price, Gentry, Akehurst, Cribb, Ellwood, Ferguson, Organ/Peerless, Williams and Moon transcend looking like sculpture that happens to be plonked down in a gorgeous setting. They are interesting projects in their own right, works inseparable from their locations.

One disadvantage this venue has, unlike Gibbs Farm and Brick Bay, is that the track is linear and not a loop with shortcuts. Sequence rules, with a definite beginning and an end. As with watching a movie there’s no escaping the bad bits. It is impossible to double back and have a second look at something good. And a humorous point alluded to in Anthony Cribb’s wittily constructed dog trial obstacle course that many visitors have a go at. Forward and onward.

Of those works that reference architecture, a highlight is Jonathan Organ and Jessica Peerless’ black wooden ‘pill box’, a small but draughty fort with quirkily angled windows and doorways that looks out over the sea for any approaching invaders. A subtle joke about a super-defensive ‘Island mentality’, inside one of Peerless’s glowing orange monochromes provides an inner light.

Up on the road overlooking the track Regan Gentry has built the facade of a much loved general store that was burnt down eleven years ago, added it on to the ruins of the original building, and on it positioned a community noticeboard. On the ‘art’ track itself Gina Ferguson has laid a section of ‘carpet’ of raw wool for visitors to walk along, a work that provides a subtly tactile walking experience and a pungent aroma wafting upwards from the fleecy grease. And as the headland experience is popular, a satirical content on the ‘flocks’ of artlovers you are part of.

David McCracken‘s rusted corten steel loop with plate steel grips appears to have been tossed up onto the rocks by waves, and flopped over like a rubber band, while Phil Price’s wind sculpture Snake uses an unravelling bulbous koru form to elaborate on the reptile in the Garden of Eden.

Like McCracken’s work, Nic Moon’s project is also made of corten steel, a cluster of vertical, hybrid, paddle/ saw/ leaf forms look like bare poles from a distance - until you move round and start to peer out to sea through their flat, veined and serrated traceries. Similarly delicate is the contribution by Carolyn Williams of a grille - set between bushes - of vertical rubber lines on which are suspended cut-steel, aural wave patterns, a visual translation of the local auditory experience.

Matt Akehurst‘s group of small towers are really peep boxes made of concrete and wood that allow you to enjoy the raking of diurnal light over internal cavities and knobs, a miniature subterranean fantasy. Matt Ellwood‘s contribution on the other hand is of a triangle of ten portable spruce trees made of tanalised timber that imitate plastic Lego trees, a sardonic comment on both mass production and embalming wood with chemicals. It is similar black humour to what he achieved a few years ago with his well known charcoal drawings commenting on the methods of the tobacco industry.

There is some remarkable work here but you have to sieve through quite a bit of chaff to find it. If you are indifferent to sunburn, dust and crowds, it’s well worth the trip.

I tend to agree with your comments here John - although for me the best thing about Kregar's pavilion was ...

I tend to agree with your comments here John - although for me the best thing about Kregar's pavilion was the shade it afforded the weary and the entertainment it offered the kids. A more subtle mind than mine might have to explain to me its deeper resonances.

I certainly agree there was more chaff than wheat, and that was disappointing. But at the same time, it's a pleasant enough experience in and of itself - this stroll over the land, punctuated by giftshop curiosities.

Yep, Organ and Peerless' pill box had some bite to it, and Akehurst sure has a way of pushing buttons.

I also liked the woollen walkway: fun postcolonial tensions there - as opposed to the emetic "Not For Sale" scrawled across that hillside. (Ironic maybe? I really hope so.)

But for me McCracken's bit was the star of the show: beautiful, slippery, confident, precarious, elusive, solid, ephemeral, smart. If they were all of that calibre, that would be an Art Event.