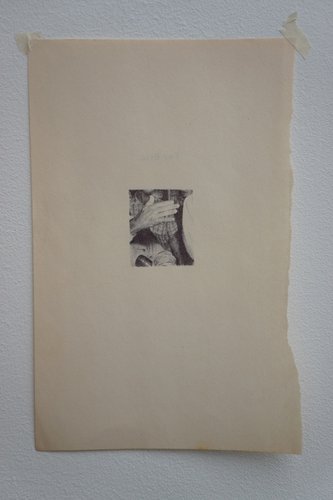 Ward Knox's diminutive drawings have a hint of Fomison or Seurat in their texture and shaded forms. Though breathtakingly precise in their execution they have a casual air about them, a calculated nonchalance, a studied indifference. As if any scrap of paper will do, and did.

John Ward Knox is known for his technically remarkable biro or black paint drawings with their astounding control and fine detail (there are some of these postage-stamp sized, biro works here), his spatial investigations using fine chain and wire, and planar ones with walls of carved and sanded plaster. Plus he has done ‘book’ works using typed on pages from found novels.

This show is interesting because besides the tiny biro drawings (many on shop receipts, or scrap cardboard) Ward Knox is showing a new type of work made on stretchers covered with fine silk or a silk/cotton weave. The translucent screen seems to allude to Californian seventies artist Robert Irwin with his scrim architectural modifications. Ward Knox’s four ‘paintings’ use silk with singly suspended or stretched cotton threads, sometimes with another tied on or perhaps glued through a tiny hole at the back. These works are so optically subtle it is very hard to know precisely what it is you are looking at. In fact they are really impossible to photograph. You need to be in close physical proximity, looking at and through it directly -  standing about a foot away.

One large square with a diagonally hanging suspended thread has an accompanying ‘ghost’ line that might be a fine shadow, a reflection, or an identically configured thread suspended in the frame on the other side of the silk. The nuances remind me of Dan Graham‘s famous Pavilion works made with different varieties (degrees of transparency) of one-way mirror glass. You see different types of trace: of self-reflection, reflection on the glass from mirrors behind you, people behind the glass in front of you looking back at you, reflections from other mirrors behind them. With the silk and barely detectable fine threads, it’s confusing trying to find the source of the evanescent images.

With the Ward Knox works there is also the subtle colour of the threads (a pinch of Fred Sandback). Grey can also be an earthy green, or white a grey. The hue of the filmy silk is also slightly varied, as are the reflective qualities. Sometimes despite the translucency, nothing is seen behind, the thread visible only at the front and then abruptly ceasing, and not continuing past the vertical silk plane.

The fine grained biro drawings tend to emphasize gestures and body parts - usually hands or sides of the head - based on photographs. Many are on receipts with a suggestion they could be a form of currency - like the work of J.S.G.Boggs the artist made famous for drawing banknotes as a humorous substitute for cash payment, or like Picasso’s signature on a restaurant napkin, or a Billy Apple ‘barter’ work. However they do not interact ideationally with the specific details of the receipt on the other side. It is only a material support, an appearance, not the result of an actual transaction.

Ward Knox’s diminutive drawings have a hint of Fomison or Seurat in their texture and shaded forms. Though breathtakingly precise in their execution they have a casual air about them, a calculated nonchalance, a studied indifference. As if any scrap of paper will do, and did.

The more ‘dematerialised’ silk and thread works on the other hand are more adventurous, about shallow space, looking, and light direction - and less about technique. Granted the drawings might be about shallow space, looking, and light direction too - but they are illustrative. The silk/cotton works instead are physicaly palpable and seem devoid of trope. They concentrate on the here and now: this gallery; this wall; this surface; this thread as mark. A dangling line, a poised question, a putative interpretation.