Light and Sound Works from Brisbane 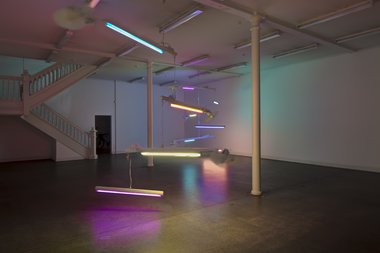 The resulting radiated light casts delicate washes over the walls, ceiling and floor - and on other reflective moving light fixtures. The streetfront windows are blocked out, yet because there are two of these turning works, not one, the room is never really so dark that the glowing horizontal bars become super-intense.

His turning sculptures in the main Starkwhite gallery are made of suspended fluorescent tubes emitting coloured light. They are hung like mobiles, each carefully balanced tube a different height and turning because of whirring fans on the outer extremities. Each configuration revolves until - because they are not on a swivel - they can rotate no further. Then they unwind until the tension is gone and the process can repeat. One work has four tubes, the other more complicated one has six.

The resulting radiated light casts delicate washes over the walls, ceiling and reflective floor - and on other reflective moving light fixtures. The streetfront windows are blocked out, yet because there are two of these turning works, not one, the room is never really so dark that the glowing horizontal bars become super-intense. The two sources of radiated illumination don’t mix on the walls or floors, the ambience being diffuse and soft, not dramatically cavelike or theatrically harsh.

Manning’s upstairs installation is closer to the latter, and accentuates the horizontal, not the vertical. Positioned on two large flat canvas stretchers taped together and lying on the floor, he has two projectors casting moving (initially) white beams across a jumbled array of thin bevelled triangles - and the occasional parallelogram - standing vertically on bases like sails on yachts.

Exploiting refraction but not using conventional, pyramidal prisms, the flickering acute angled beams splay out, displaying parallel striations internally as they rake across the canvas. The tips of the slivers of split light bounce back and fourth between the triangles, multi-coloured shards extending outwards and ending up on the lower edges of the walls. This work is quite different in mood from the bigger display downstairs, being fragmented and kaleidoscopic, linear with sharp-edged and jagged streams of colliding colour. It gives a sense of parallel vectors and speed, a spectacular feeling of dynamism.

Manning’s sonic performance at the exhibition’s Sunday afternoon opening was gently understated, delicate aural textures made with Heath Robinsonish gadgets - namely hairdryers with their fans removed, that whirled lines of red string fastened to tripods. Two such sets of vibrating string in parallel coaxed sounds from (at the front) a set of hollow metal gongs positioned between the tripods, and secondly - behind - springy metal strips (like those in a musicbox) held in place on square slabs of wood made vertical with clamps. These barely audible ‘chimes’ and ‘harps’ emitted a low vibrating hum which Manning subtly accentuated with an amplifier.

Such low tech, pre-digital works celebrate (obviously) obsolete technologies and dated optical and aural experiences, and having a room for each type of light treatment both up and down stairs is a clever combination, like the two distinct sound sources percussively activated by string in Manning’s aural display. Intriguing foils.