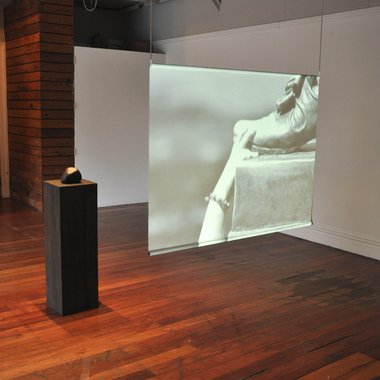 It is the stillness and silence of this show - symbolised in the density and coolness of stone - that reminds me of my early experiences at Church. Those tedious Sunday afternoons of childhood, staring at the bronze Jesus above the altar, or kneeling on the creaky wooden pews, admiring the white pale feet of Mary. A statue in the corner, her arm raised, palm held open in a mute blessing.

Every time I climb the narrow stair well to Enjoy, passing the blemished white banisters, I’m not making a pilgrimage. I’m just going to see another show. I don’t expect to be touched while I’m at the gallery (emotionally or physically) and I don’t expect to touch the work either. In fact I expect not to.

What’s so surprising about the current Enjoy exhibition by Alice Baxter is that she reaches out and touches faith, the pilgrimage renewed. At first glance this show trades in the glacial, professional presentation I’ve come to expect from emerging artists. Sometime later is sepia toned, eloquent in its simplicity and focus. A single screen of fabric is hung from the ceiling. Backlit: a projection of photographs play across the screen like a travel slideshow. Each image depicts the layering of hands on public sculptures and monuments. The sculptures are often European, from abroad, far away. The photographs all close ups, zoomed in on the moment of touch. The human hand reaching out and seeking solace from a statue.

A bevy of school boys point their arms like arrows, their hands lain on the foot of a shoe. This is a pre-exam ritual. But I bet most of the boys aren’t counting on an A+. On the grounds of Harvard University, another famous bronze shoe, this time adorned with a fru fru bow. This is also rubbed by visitors for luck, even though the monument is referred to as The Statue of the Three Lies. The inscription in front of it reads: John Harvard, founder, 1638.

In the gallery space at Enjoy a wooden plinth stands before the video screen. The plinth is a Macrocarpa railway sleeper. On it sits a bronze cast of a stone. Baxter found the original stone on a beach and this bronze is a replica.

I reached out and touched the stone. It was cold, but satisfying. The stone has a spine, a curved back, which I arched my palm around. I didn’t feel blessed. The stone of course can never articulate how it felt about me.

In the mass of stone: silence.

Silence is a balm that can sooth or startle.

It is the stillness and silence of this show - symbolised in the density and coolness of stone - that reminds me of my early experiences at Church. Those tedious Sunday afternoons of childhood, staring at the bronze Jesus above the altar, or kneeling on the creaky wooden pews, admiring the white pale feet of Mary. A statue in the corner, her arm raised, palm held open in a mute blessing.

Baxter’s work is mute too: the video projection makes no sound, adding to the experience of this subtle exhibition. I usually watch art videos for a maximum of a minute before tiring and moving on. But the photographs hold my attention. Who took them and when? The artist? Baxter is also a designer and it shows. There’s plenty of formal flair in the distilled presentation of her exhibition and also in the framing of each photograph. Fingers mimic the folds of drapery, criss-crossing the crevices of a garment cast from bronze. Baxter’s blurred images in sepia tones evoke the hushed atmosphere of the museum or at least the faded old world photograph. However in one image the black bubbled dial of a wrist watch is clearly a ghost from the recent past.

I stayed for some time watching the images and talking to the gallery minder. We discussed the public sculptures within the slide show. The gallery minder pointed out Abraham Lincoln. In the photos: a tourist’s hand on Abraham’s nose. Abraham’s nose as large and pointed as an elbow. Abraham, we will never know you. Yet we make the effort. We touch face.

So often exhibitions by emerging and even established artists are feats of deconstruction, life’s lack of meaning laid bare - the bride stripped bare by her bachelors even - art as abyss, the howl, Munch’s scream, irony our salve against the vacuum of modernity. Or Jeff Koon’s puppy. Hirst’s diamond skull. Excess.

Somehow Baxter’s exhibition sidesteps all this, instead tapping faintly into a parallel world and past, where sculpture is monument not art and feeling rather than thought is imbued. The Enjoy website refers to the notion of the ‘significant moment’ and talks about the ritual of touching a monument for luck or for blessing. I’m not sure this kind of ritual is irrational. I suspect if anything it is deeply inscribed in our DNA, part of what makes us human. The gallery minder mentions the Lion sculptures outside the Beehive. People often touch their paws. Why the paws he wonders? It is a good question. Baxter’s photographs focus exclusively on human hands, she doesn’t show us the faces of her pilgrims. A wise move. The act of touch becomes that of everyman.

I don’t think her pilgrims - whether real or posed, joking or serious - are silly or stupid. Their touch doesn’t seem in vain. I also don’t feel hugely connected to the original artists who crafted these monuments from bronze. The statues are already larger than the people who created them; part of history.

Baxter displays a gentle sense of humour. In one image of a naked torso, small hands sneak in from the sides of the photograph and cover each marble breast. She also includes a charismatic sequence of a wild boar or is it a warthog? Someone has put their hand in its mouth. O warthog where are you? You too are a replica, yet one that deserves a pose and a camera flash.

Sometime Later is an exhibition of understated glamour and confidence. The accompanying booklet is well made, a fitting tribute. The publication contains a collection of the pictures seen on screen and also an explanation of the chemical processes that take place with the touching of bronze. Hand held each page is of course creamy and soft to touch.

Faith flickers in the room, like the flash of a camera in a museum. The ideas in this exhibition burn on a long fuse. I’m kinda touched.

I might go back and see it again. Sometime later.