Legend of the Spreader 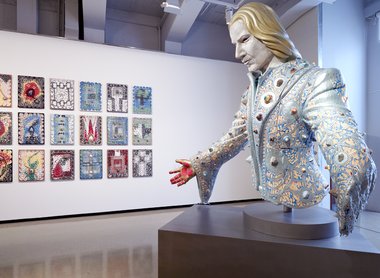 He's currently exhibiting with Sarah Lucas at Sadie Coles. The invite for the show is a photograph of a blonde, dusted with yellow paint, doing a spreader on a golden sofa. The exhibition's title: White Hole. I'm a fan. I'm happy to embrace the white hole. To some this is just a ploy for attention, but I say art is an area where so few dare to be obvious. Why are we so derogatory and squeamish about genitalia? Whatever your sex, making work about the vagina remains problematic.

The Wizard is not from Oz. He’s an enormous polystyrene prop from the discontinued TV series, Legend of the Seeker. His marbled face stares out of walls and bus shelters around Wellington. The Wizard has become the inadvertent poster boy for Rohan Wealleans latest exhibition: Apocalyptic Intuition. At City Gallery, the wizard commands the space like a figurehead leaning out from the prow of a ship. He wears a pale blue Technicolor dream coat, studded with small geological tusks. The Wizard of Forgotten Flesh holds out his red right hand: raw with pink paint.

Of course with Wealleans, the flesh is never forgotten. He’s well known for treating paint like a skin, a membrane that can be pierced and peeled back. I expected a lot from this exhibition. To look forward to a Wealleans show is to imagine the biggest and best possible scenario. We often deride the enormous - too phallic, too obvious, too in-your-face. That’s part of the counter attack. Wealleans is an artist who will go to extremes to entertain us, so when we talk about his work we’re building the case for big.

Does Apocalyptic Intuition deliver? Yes. The exhibition features two larger than life props - the wizard - and the overturned head of Kevin Smith, once a set piece from Xena Warrior Princess. It’s a testament to Wealleans’ talent and scope that the use of these large-scale ‘ready-mades’ isn’t referential. Xena is not being summoned back from the past. The ghost of Kevin Smith is still intact.

Smith’s head is now a hollow polystyrene grotto that the gallery goer can climb into. The head rests on a plinth, its wooden hobbit door swung open so everyone can take a peek. What’s inside? White sheepskin and cushions. This work is called The Psychosis Chamber of the Oracle, but don’t be fooled. The artist has also described it as a James Bond arctic love nest. Psychosis is the pièce de résistance. Wealleans has held back on the exterior: the head rests on its side; the hair painted a dull shade of gold, the face a uniform metallic blue.

I took off my shoes and entered the head. The white sheepskin has obviously been well used, its now greyish and slightly trampled. A row of creamy cushions line one corner. I lay down and stared at the ceiling decorated with stalactites of paint, all in a reduced cream palette. Several crystals stud the left hand side of the wall. The crystals are lit from within like glowworms. They gleam whitely: a cute touch. Wealleans isn’t beyond the cute. Apocalyptic Intuition is an exhibition where headspace is imagined literally. What’s it like inside the artist’s head? Cosy, snug. I felt like a teenager lying on my bed staring up at a galaxy of glow-in-the-dark-stars.

In another corner Wealleans has worked his evil magic on a Bratz doll. Her face has been festooned with small spiral shells. The shells are actually scallops of white paint taken out of the ceiling. She has no eyes, only a crystal ball, large and blue.

I asked my question and pressed the blue ball.

‘Will I write a good review of this show?’

The Bratz doll giggled, ‘No doubt.’

I climbed out and let my boyfriend take my place. (Not that the head isn’t built for two or more to enjoy at a time…)

‘Is Rohan living in a castle?’ he asked.

‘It’s quite nice in there,’ my boyfriend said.

Exactly. This show isn’t apocalyptic. The props are defunct, not doomed. The severed head is hollow: you can build a hut inside it. All your questions about the future can be answered, if you accept that a Bratz doll will provide the answers.

Apocalyptic Intuition also contains 48 wall works that depict the celestial dreamtime of the wizard, his birth, life and battles. The wall works trade in the painterly approach we’ve come to expect from Wealleans. Each image is framed by petals of paint, peeled back and held in place with a variety of multi-colored pins. Small cones or horns rise out of each work, like miniature mountains on obscure topographical maps. The paintings are fundamentally abstract; the titles range from descriptive to frivolous and obtuse. Cream Pie, Robot Scream and Rhino Sneeze Dreaming are titles every bit as precocious as the paintings they supposedly depict. I spent a long time looking at the configurations of these works collectively, as though I was trying to decipher a wall of hieroglyphics. The paintings are divided into four groups of twelve; Training Spells features the predominant use of charcoal, yellow and red, whereas, Final Battle, is depicted in heavy blues, greys and green. What does it all mean? My notebook contains scrambled observations; one image ‘looks like an owl’, another ‘an upside down ice-cream.’

City Gallery has recently published a small golden booklet about the wall paintings. This irreverent guidebook comes with a warning of explicit content on the cover and is well worth fifteen dollars. Just don’t expect too much explanation. The opening section on Conception and Family History is hilarious. Glee is accompanied by this description: ‘It was hard in an instant. She was impressed by its girth. It lit a fire inside her and brought an overwhelming sense of happiness.’ Glee is a painting that at best reminds me of a four fanged monster with a crop of purple hair. The slippage between the images and our expectations is enlightening. Curator Aaron Lister’s essay, ‘Spellbound,’ details the magical and transformative powers of painting. Lister says, ‘these texts are less descriptions than incantations. Rather than locking stories into the painted surface, they command the content to force its way out, to invade our space, our world, and our heads.’

Maybe that explains why I spent so long staring at these wall works as though a vagina might suddenly burst out and sucker itself to my face like an alien. Yes, the flesh can never be forgotten. Wealleans is too well known for sexual slapstick, people see perversion in the simplest swirls of his paint. Several gallery goers told me they could make out illicit content in the paintings, although they were too polite to tell me exactly what they could see. An erection? A boob? A moob? I genuinely wanted to know.

I don’t think this is necessarily a limitation of the exhibition. Wealleans art practice has been called everything from misogynistic and chauvinistic to shamanistic. We bring this set of preconceptions to viewing the work of this particular wizard. Not entirely unreasonably! He’s currently exhibiting with Sarah Lucas at Sadie Coles. The invite for the show is a photograph of a blonde, dusted with yellow paint, doing a spreader on a golden sofa. The exhibition’s title: Situation White Hole. I’m a fan. I’m happy to embrace the white hole. To some this is just a ploy for attention, but I say art is an area where so few dare to be obvious; Wealleans work really is a brazen act. And why are we so derogatory and squeamish about genitalia? Whatever your sex, making work about the vagina remains problematic. I just read a rather damning article in The Guardian about Naomi Wolf’s new biography of the vagina. The article refers to Wealleans current London exhibition as ‘magnificent.’

His artistic pairing with Sarah Lucas also makes a lot of sense. How could her ‘Au Naturel’ mattress not want to get it on with one of Rohan’s vaginas? Both artists know how to dish up a heaping helping of fugly. Consider Lucas’s early works: Two Fried Eggs and a Kebab and Tongue and Groove; Always Goes Down Well. There’s an equally hearty sense of humour about the body and its many misgivings in Wealleans’ back catalogue. His paintings have often been odd and misshapen. Fat, rather than skinny. Crude. Rude. Lewd. It’s been interesting for me to consider how gender shapes our interpretations of an artist’s practice. If a woman had made Wealleans work, would we think it was all about body horror and feminism?

Wealleans plays with gender stereotypes shamelessly, including the jock artist. He’s previously made a film dressed up as a beast! He can laugh at himself, and he let’s the audience off the hook with a few laughs too. This isn’t a small gift. It’s huge.

But what about The Wizard of Forgotten Flesh? Each viewer will engage with the narrative life of the Wizard to a different extent. The wall works offer plenty of formal frivolity for those who seek to stay on the surface of the paintings, marveling at their multiple skins.

Anthony Byrt tweeted, ‘Probably the best thing Rohan Wealleans has done. A talented jester starting to get control of his silliness.’

Silliness is a key word. I don’t think of the Wizard as a fallen public monument or a statement about the intersection of painting and sculpture. I prefer to consider the Wizard an ex-fun park figure, perhaps a marooned castaway from Rainbow’s End. A blue glass ball sits at the neck of his jacket. It is the same kind of blue ball that the Bratz doll holds inside The Psychosis Chamber of the Oracle.

I recently read on the Aucklander website that Wealleans has purchased a Grimace and the Hamburglar tower from an old McDonalds playground. Fat, purple Grimace was my favourite McDonalds character. He was benevolent, shaped like a ginormous beanbag. I can’t think of a better new ambassador for Wealleans’ fecund artwork.