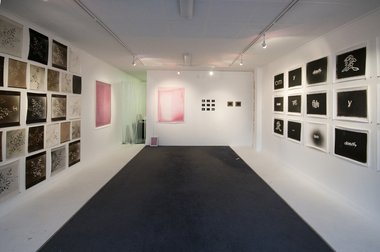 Light, as in the physical illumination, and light, as in ‘light on your feet', is part of the gambol here, even though Benson deals with the dark subject of mortality. Light and dark is her medium and her use of an old camera enables her to produce a thick charcoal black that sets off the neon white to startling effect.

Lisa Benson has had a long association with photography, playing with the medium, testing its limits, pushing beyond the image so far that it ends up skirting the borders of ethereal abstraction, stuff say Rothko was doing with paint back in the fifties. But Benson does it more faintly, with less self-conscious deliberation, composing finely wrought squares and triangles of geometric space so that the viewer feels as if they are looking through shards of thin coloured fog. All this was achieved with light sensitive paper taken out of a black box and shuffled about over time and then later enlarged.

Blinky, a show in Ramp Gallery’s temporary premises at 113 Alexander Street, seems to represent a major shift in her practice with a return to the image, to the real world, at least the signs associated with that world. Here she has photographed a series of neon signs in black and white which in the small gallery space take on the appearance of notations or hieroglyphics, some of them seeming to be simply squiggles and symbols, while others spell out specific words.

However on closer inspection, the shift of practice is not that marked because what we have here in reality is a continuum that fits with what has been Benson’s central preoccupation all along - that of light. This is her “neon phase”, traversing where others have gone before: Bill Culbert, Paul Hartigan, even Colin McCahon without the neon. It was inspired by her residency in Beijing in 2010 when she spent several months in the capital where, despite the cultural dislocation and not being able to speak the language, she felt quite at home.

Light, as in the physical illumination, and light, as in ‘light on your feet’, is part of the gambol here, even though Benson deals with the dark subject of mortality. Light and dark is her medium and her use of an old camera (think bellows and hiding under the cloth) enables her to produce a thick charcoal black that sets off the neon white to startling effect.

These are photographic images of various neon signs (she had the signs made while in Beijing) spell out words that for the artist capture certain seminal and philosophical ideas: death, love, moment, om, Y, this. These selenium toned silver gelatin prints, although expressing primal experiences, have a “lightness” and a certain joy about them. The word for “love” in Mandarin, for example, appears like two figures dancing, while “death” as written in English, in its neon construction, could be mistaken for “dearly”.

Time is Benson’s other preoccupation and the theme of fading light, the trace and the vanishing form. The Western world is often future directed while the Eastern mind-set, particularly in its Zen manifestation, is to strive to live in the eternal now. One of Benson’s art stunts in Beijing was to ride around the streets on a bicycle, handing out her ‘neon postcards’ which read, “This moment is my/your life’s work”.

Time, transience and disappearance it must be remembered, was central to the creative process of her earlier abstracts where paper was involved in capturing/losing colour and form.

My favourite work would have to be the only sculptural piece in the show, Double Death. It consists of two neon tubes spelling the word death, one red the other white, while positioned atop a heap of shattered glass. Beautiful and macabre at the same time. Contradictory and compelling.

On the other wall of the gallery is pinned a series of photographic images of snowflakes, entitled A Little Flakey ( a reference to cloud seeding in Beijing - weather manipulation) The snowflake as object is both ephemeral yet possesses a rigid geometry. Benson plays with the notion of change in the modified colour tones of each of the works while also altering the structures of each.

Yet another Chinese layer to the exhibition that engages with the transitory theme is the inclusion of music, played on turntables from the 1950’s, purchased in Beijing and playing a mix of Chinese opera, Cultural revolutionary propaganda and an instruction guide on language.

In a final twist, five self-portraits of the artist that were commissioned by Benson and produced by hired Chinese artists in the realist tradition, are included in the show. These works on linen, although based directly on photographs, display a certain subtle orientalised look.

And then to cap it off, one concluding element to complete the Eastern experience; Benson brought home Chinese cigarettes which were available free to punters at the opening. There were many who did avail themselves of such largesse. They obviously weren’t reading the neon signs. Or perhaps they were.