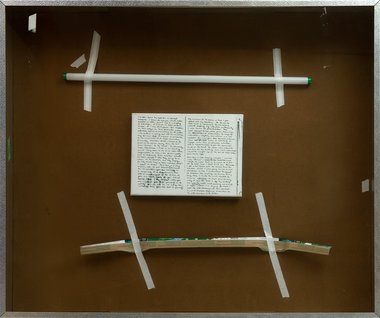 Simon Denny looks at observational and analytical writing as a performance, zeroing in on a notebook of Wystan Curnow's where he discusses a 1979 work by Peter Roche. Presented in a deep tray between the wrapping and tube of a fluorescent light, one of Curnow's handwritten pages (screened onto a small canvas) discusses audience boredom. Denny looks at the detailed intricate nature of Curnow's account rather than Roche's performance at Elam.

Up on the top floor of the new AAG building, Made Active, a selection by Natasha Conland of thirteen works acquired by the Chartwell Collection, examines the nature of props or sculptures operating within or around performance - ways of thinking about their role or function. Are they inert until ‘energised’ within the context of live art-action, in a manner similar perhaps to central African ‘fetish’ or ‘power’ objects where the sleeping gods within are allegedly activated by hammered-in nails and incantations? Or do they have other properties that are more subtle, where the link between artefact and action is not so pronounced?

The most conspicuous work (as a provider of sheer spectacle) in the show is performance artist Daniel Malone’s installation, Black Market Next to My Name, a specially constructed ‘dwelling’ with high walls and five densely packed rooms - viewable from a bare corridor along which the visitor moves. The ‘living spaces’ make up a sort of museum into which Malone has crammed all the worldly possessions he acquired before moving to Poland in 2007. Not just obvious items like crates of long player records, racks of clothing, piles of books, stacks of computers etc, but also obsessively hoarded (but carefully sorted) ‘rubbish’ like cardboard toilet-roll cores, bottle tops, champagne corks, eggshells, cigarette packets and used straws. It is like a claustrophobic, walk-in cathedral with posters, maps, Ziploc bags of flat objects and branded shopping bags pinned to the walls; all going up to the ceiling.

This extraordinary plethora - as a paean to consumerism (‘I shop therefore I am’) - seems a satire on the notion of the Self being constructed by accummulated possessions, as well as a smirk about the capitalist truism that everything (anything at all - even waste) has a market. It is a monument to Malone’s absent body (but very present mind) as well as a global metaphor for an avaricious capitalist economy - a theme extended by Ian Burns and (maybe) Paul Cullen in their contributions around the corner, with globally roaming Hummers and roving inverted buckets.

Malone’s sprawling work is a major exhibition in itself, packed with unusual juxtapositions, peculiar objects not often seen in this part of the world, and his very individual interests. Other Made Active artists continue the theme of sculptural items being props for the viewer to bodily interact with in empathy with the artist - mentally not physically - though I guess you could (if you wished) gingerly walk through Alicia Frankovich’s steel-framed portal and not topple her carefully balanced eggs, or on the rooftop of Sriwhana Spong’s ‘sculpture garden’, climb up her oddly proportioned cement steps and hold a pose as dancer Yahna Fookes did - in Spong’s performance Actions and Remains.

Spong has two powder-coated linear steel forms that support fabric banners that are gently disturbed by breezes blowing down over Albert Park. They have links to the contribution of Allen Maddox in this show - specifically in regard to the role of nature (or laws of physics) within the bodily action of the artist. A flapping gauze strip can be a surrogate blur for Spong herself darting through a linear rectangle, just as with Maddox many paintings are a lot more than just the obsessively repeated crosses that writers tend to focus on. They also incorporate runny trickles in the manner of Sam Francis, Bill Hammond or Callum Innes, and strategically positioned blank spaces. With these decorative dribbles there is an overlap between artistic agency and the aleatory aspects of nature - in Maddox’s case an allusion to his own body fluids: referencing Pollock’s pissing in Peggy Guggenheim’s fireplace perhaps.

Bodily limitations are examined in Campbell Patterson’s series of six yearly videos of himself supporting his mother’s weight for as long as he can sustain the strength in his arms, he and her as two objects: a plinth and its sculpture. We look with interest at how these ‘objects’ physically change year by year, and what they wear in comparison with the standard drapes positioned behind them.

Jim Allen’s Hanging By A Thread II looks at its own processes of representation, the documentation of recreated (and original) Allen art performances, and also American newspaper coverage of the Iraq war. Both of these mediations (one is of Allen’s hired cameraman filming Allen’s own reading-and-crumpling newspaper performance off screen) are examined side by side - and under intense scrutiny, for samples of ‘reality’: human hair, a bloody bandage, a filthy rag and a strip of text are displayed on tall sticks nearby. You have to move past them to see the small screens on the floor.

Instead of filmed documentation or photography, Simon Denny on the other hand looks at observational and analytical writing as a performance, zeroing in on a notebook of Wystan Curnow’s where he discusses a 1979 work, Get the fuck out/Got to get out by Peter Roche. Presented in a deep glassed-over tray between the wrapping and tube of a fluorescent light (a symbol for understanding, and a connection to Roche’s later work), one of Curnow’s handwritten pages (screened onto a small canvas) discusses audience boredom that comes from an action’s repetition. With eight pages photocopied and hung on the wall nearby, Denny looks at the intricate nature of Curnow’s account rather than Roche’s performance at Elam (the only images are Curnow’s drawings in his notes). We enjoy the precision of Curnow’s thinking and description, and its great value for younger artists like Denny.

With Made Active, Conland has constructed a complex, richly layered exhibition incorporating also a series of seven commissioned performances (each one documented) and a program of artist videos. The show’s thick, compact, little catalogue, containing superb writing by David Cross, Conland herself and Anna Parlane, is one of the best publications to come out of Auckland Art Gallery for many years. I have visited this show four times and feel four more visits would be just as rewarding. Dense with cross connections and surprises it has to be one of Auckland’s highlights for 2012.

This new 15 week performance programme starts soon on the Tate site. Exciting line up, though I personally think they ...

I'm delighted you noticed that word Roger. I thought quite intensely about it, and used it because I didn't want ...

I thought Curnow's writing held up superbly well to scrutiny under glass.
My visit to the show was fleeting and it is one worth returning to in my mind as well. I really enjoyed the Patterson videowork, it is not often we see someone's Mum in art that is this contemporary. I noticed other gallery goers watching this video too, smiling and laughing. The video is worth reviewing in itself - charmingly simple at one level, it is also hugely endearing and the patience and good humour between Mother and son were a pleasure to view, especially in this highbrow context.

Is "Performancivity" a diabolic inversion of (or homage to) Jones' - nails across a blackboard trope - "Pollockian performative", from her doctrinal root-text - "Body art : performing the subject"? Or what other unholy necromancy or diabolic/academic text do you derive from here?

The social/cultural-dynamic and function of the power objects, you led with as metaphor (at article's inception), couldn't differ more from the social/cultural status of some of the critiqued performance-detritus 'thingys' being analyzed in your text.

Necessary digression:
Users of Congolese power figures (minkisi) employ applied substance(s) and object(s) to their invested figurines in an attempt to draw spirit(s) to them rather than from them. The physical figures themselves are essentially animist in that they provide 'place' rather than 'the spirit of place.'Although, admittedly, minkisi (plural) or nkisi (singular) are words connoting both spirit and object.

Objects comprising performance detritus are art-souvenirs. Post-object objects that can be, and are, as in the Chartwell case, put up for sale and purchased.

And like real Nkisi removed from ceremonial and cultural context... or more so like simulacra-Nkisi, manufactured strictly for the tourist trade, they are at best emblematic of things once party to whatever magic may (or may not) accrue to the reputation of the best examples of performance art.

And at worst a 40% commission item for sale by art dealers who specialize in art which theoretically (at least) positions itself as NEWly eschewing the philistinism of object-fetishism and the asscoiated tainting-lucre of the bad OLD market in art-objects.

I'm delighted you noticed that word Roger. I thought quite intensely about it, and used it because I didn't want to say anything that got confused with J.L Austin's 'performative utterances' and other connected discussions by Derrida and Butler. I didn't know about Jones. Thanks for the reference.

And my opening with the Congolese reference happens to play off my interest in fetishism in NZ art - I once curated a show in New Plymouth about it in the mid-nineties. It seemed a logical point to start, if an object is alive with something dwelling within it. After all, there was for example that big Animism show recently in Germany - admittedly a vehement critique of anthropology - but indicating that the Fetish was a good place to commence nonetheless.

By the way Conland's show is not about residue from performances, it is about sculpture, painting and installation that usually alludes to the activity of performance - a static (or motorised) extension of it.

Exciting line up, though I personally think they shouldn't have any documentation. The work should be live online and then, if you miss it - tough titty! No recordings allowed!