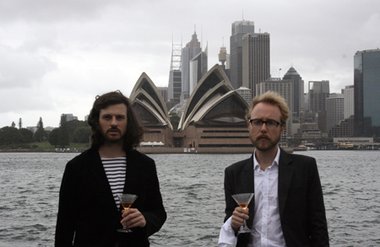 In these videos there is consistently brilliant ‘non-acting' acting at play. It seems both deliberate and the result of the vagaries of the surrounding social situation; these are after all sociological interventions as well as directed pieces of film and the postcard backdrops are perfect as geographical hosts for Gregory & Watts self-articulated occasions, the landscape providing the appropriate visual image of social and class desire that the accompanying cocktails reference.

The pursuit of the good life is a universal proposition but ultimately an individual question. What the good life entails for each person might differ greatly, but it’s likely that we all partake in a social act that seeks to denote it. For some it might be the smell of country air on a spiritual retreat, for others the cocktail hour at the end of their working day.

Writing this, in the physical context of a central Sydney shopping mall food court, I find my eyes wandering to the retail clothing store directly opposite my Formica table. ‘Insomnia Dream Awake’ (complete with a mermaid inspired logo on the signage), sells a disparate range of cheap lingerie, shoes, and ladies casualwear - all under the glittering light of a presumably fake plastic chandelier, the glittering occurring in a way more akin to a bubble bath, or the foam of cheap champagne. Both food courts and fake chandeliers seem like obstacles in the pursuit of the good life. Yet to some they probably help signify it.

Gregory & Watts are no strangers to the analytical unravelling of ritual and place. The Sydney-based artists have made a wide range of recorded interventions into public spaces - ranging from unofficial audio tours of gallery exhibitions to local pubs and even a Starbucks coffee shop. In the Cocktail Hour they embark on a similarly comedic path using a simple displacement to enable an inspired take on the subject of the good life.

Taking centre place is a series of five projected videos. Each work uses the same formula where the artists arrive at a specified location in Sydney and proceed to mix, and drink, a particular cocktail. At a basic level the gag is always based on the geographical misplacement of the social routine of the ‘Cocktail Hour’. The locations change from work to work, ranging from the routine setting of a train in Gibson City Circle, to the hidden political history of a neighbourhood park in The Block, as well as some of Sydney’s more desirable and recognisable backdrops.

In each of the videos there is consistently brilliant ‘non-acting’ acting at play. It seems both deliberate and the result of the vagaries of the surrounding social situation; these are after all sociological interventions as well as directed pieces of film.Sydney and its postcard backdrops is perfect as a geographical host for Gregory & Watts self-articulated occasions. The landscape provides the appropriate visual image of social and class desire that the accompanying cocktails reference. In many ways Sydney represents an ideal physical incarnation of the good life. In addition to the dramatic harbour and various examples of architectural caché, it fortifies this idea through the bombardment of a largely self-awarded term ‘world class’ - usually attached to anything from the cultural spectacles of the Opera House to the celebratory chefs that work both reputable Sydney restaurant’s and their own reality TV cooking shows. This disposition is held not only by Sydney, for the further one travels along the periphery of the Antipodies the more pointed these insecurities become. Such craving to play a role in the cultural capital of the larger world has never been more pronounced.

The work Manhattan Sydney (2011) overtly articulates this social longing. As Gregory & Watts mix and sip on their ‘Manhattan Sydney’ cocktails, the Opera House and the Sydney CBD loom prominently over their shoulders. As their artist statement attests, ‘Realistically we wish were in New York or even better, drinking Sydneys in Manhattan’. Throughout the series the act of preparing and drinking the cocktails embodies this desire - for the fulfilment of cultural and social class, and for the attainment of the good life. Although the artists act out this role, their conviction seems to be not the realisation of such desires. Rather they each portray a kind of everyman. The uncomfortable mannerisms heighten this feeling - as if questioning a learned social process. Along the lines of “We’re doing this right, right? But I don’t think that it’s working”.

One of the more farcical videos is Champagne Cocktail Observatory Hill (2012). Gregory & Watts are shot against the backdrop of a wedding party who themselves are photographed against the postcard setting of Sydney Harbour. This provides a most glaring juxtaposition. The wedding party displays obvious joy, sincerity, and pride in a celebration of the visual spectacle behind them, while Gregory & Watts act knowingly out of place. Their exuberant champagne could well be perceived as ironic - although the wedding party seems happy to simply ignore them. As a viewer there is the odd tension of realising that some kind of social protocol has been broken - and with it the cracking of the picture perfect social veneer.

Alongside the video works there are two curious works on paper by Tim Gregory that complete the show. These are black and white photographic prints from the videos that are reworked in oil paint to highlight the figures of the artists in colour. The resulting romanticism comes from the black and white photographic backgrounds being made distinct from the default aesthetic and matter-of-factness of the digital video.

In a sense these works take the exhibition out of the present. They read like vintage photos touched up by an old hand-colouring process, nodding to a bygone time but in an extremely self-reflective way - painting the present with equal parts of cynicism and optimism. The Cocktail Hour is comedic and smart, but not smart-arse. There’s a believability despite the scripted interventions. The figures are Gregory and Watts - and the various situational stages in the videos successfully exist as a social and geographical reality to be negotiated and traversed.

Combining a sense of comedy with genuine notions of place and identity is difficult to get right. Though Gregory and Watts create a physical comedy that references Charlie Chaplin and Buster Keaton, it is closer to a script-less Curb Your Enthusiasm, or the early Australian reality TV series of the 90s Sylvania Waters. These memorable and enjoyable videos (see some on Vimeo here) are moving postcards to the future, not as a warning, but as a kind of tolerating sigh, a response to the situation of life’s operations around us.

Good spotting there Mr. Hemer........ Can attest to the fact that these fellas are 'seriously' funny and winning - in ...

Good spotting there Mr. Hemer........
Can attest to the fact that these fellas are 'seriously' funny and winning - in formal and guerrilla-improvisational ways. They need to be gotten over here for a spell. 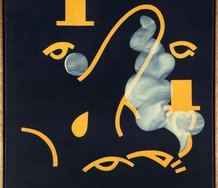