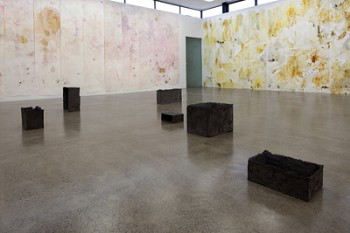 In the large square room at Artspace Taniguchi has made hollow box shaped sculptures out of thin layers of hardened cement (with black oxide mixed in) applied to banana boxes and reinforced with hessian. The thin corrugated cardboard has later been peeled off and the coarse rectangular planes joined up. There is a strange wit about these forms because they are delicate and brittle, not qualities normally ascribed to concrete.

Adam Avikainen is a well travelled American artist who has spent a number of years studying in Holland and Finland, and doing a residency in Japan. His work involves aural as much as visual properties, using techniques in writing, painting, composing, film-making and even storytelling. Here in Auckland he is exhibiting with a Filipino artist, Maria Taniguchi, who likes making sculpture, drawing and video. Her work tends to be meticulously controlled, tight and precise, whereas his is looser, gestural, more personal and spontaneous.

In the large square room at Artspace Taniguchi has made hollow box shaped sculptures out of thin layers of hardened cement (with black oxide mixed in) applied to banana boxes and reinforced with hessian. The thin corrugated cardboard has later been peeled off and the coarse rectangular planes joined up. There is a strange wit about these forms because they are delicate and brittle, not qualities normally ascribed to concrete.

In contrast Adam Avikainen presents two murals of vertical sheets of thin paper carefully pinned up in position. They has been drawn on with charcoal and painted with herbs like turmeric, ginger, oil of oregano and beetroot juice with the aim of releasing anti-carcinogenic chemicals into the air. The vegetable colour is thin like diluted dye, and the butted together scroll-like sheets make up vaguely abstracted hillscapes with aerial perspective - partially the result of the oil that forms isolated islands of colour.

As collections of scratchy marks and rose or ochre coloured stains Avikainen’s improvised paintings are not particularly memorable. They are too delicate and amorphous to hold your attention, avoiding a strident dynamic. His aural works are much more interesting, particularly his read prose poems that sound like strings of non sequiturs - in the style of John Ashbery with his poems of disconnected sentences. In reciting these, Avikainen’s voice is often mannered with a peculiar intonation that dramatically shifts in register accentuating artificiality.

Avikainen performs his collagelike text works online under the name of Ginger Glacier, a moniker he has constructed stories around to join up the two words. He can be heard reading/singing his strangely disjointed poems here - other works can be experienced playing in the gallery.

In the side rooms Maria Taniguchi shows two works, one consisting of pages of drawings and notes from her 2010 diary laser-etched into small sheets of fine-grained plywood. These rigid ‘pages’ are puzzling with their soft lined sketches, clustered scribbles and crossed out comments. They are beautiful objects, but they are also in a sense solipsistic and self reflexive, repeating recorded information and private thoughts and putting them in a new aestheticised, physically palpable context.

Her other work is a digital sequence of twelve images with texts, based on a trip to Tiritiri Matangi island, the bird sanctuary. These complex storyboards - shown on a video on a plywood plinth - vary from blue rectangles to spiralling rings of ferms, and mix in abstract texts referencing for example the minutiae of font design, the conceptual structures of film scripts, branding and consumerism. The Xanadu title, like the name, Muses for the cement boxes, references the Olivia Newton-John movie of the eighties.

The overall heading of this show can mean wandering some distance by foot or waffling on verbally. It cleverly encapsulates Taniguchi and Avikainen’s enthusiasm for walks, and the free-associative aspects of his prose-poem texts. Taniguchi and Avikainen have a lot in common, and their delight in stringing together narrative fragments that only partially merge has links with earlier Brecht-influenced work Caterina Riva has brought to Artspace, like the films of Ed Atkins and Sean Grattan, but not as sensual in colour or so bodily immersive.