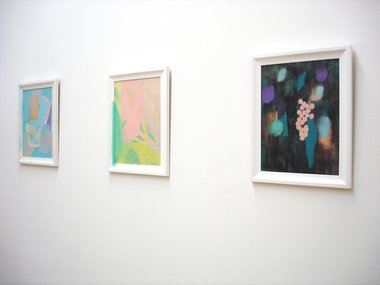 Leek is a cool painter, but not too cool for school for the sake of being cool. Filling her quiver with the effects of the intimists, the modernists, outsider art, the banal simulacra, and the postmodern “bad painters” she has developed a process that constructs an abstract schema anchored in figuration and post-painterly technique.

I am an unashamed defender of painting in the face of a New Zealand art scene at the mercy of pious hipster art nuns and the disposable, low-stakes conceptualism that Anthony Byrt, writing of Prospect 2011 in Artforum, described as “a particular - and particularly strange - New Zealand aesthetic, a kind of lo-fi, apolitical cool that often seems finicky and far too concerned with its own looks to step outside its comfort zone.” I like objects, and I like paint on flat surfaces. I love the whole “culture” of painting - the near-cliché’s of easel, palette and brush, the romantic fantasies of Rembrandt in his smock and floppy hat dashing off another self portrait, or Van Gogh slicing his ear off to impress a girlfriend.

Saskia Leek is a painter - a generic term like “artist” or “practitioner” would only dilute her contribution and undermine her chosen craft. Her oeuvre has evolved a long way from the technical naïveté and adolescent reminiscences that first caught critical attention back in the 1990s - the tail-end of Christchurch’s “Pencilcase” influence; she was a generation after Cotton, Robinson, de Lautour, and Pick at Ilam. Since the mid 2000s, Leek has preferred to use found samples of mass-produced or popular visual banality as a starting off point for the application of paint to ground. The works in Fruit Subjects are a continuance of that vector, although the source images would appear to have been derived from the kitsch end of that mainstay of art history from the Dutch Golden Age to Cézanne’s apples: fruit. It is an art that conceals itself - Leek makes it look easy.

Indeed, there is something of Cézanne’s use of colour to describe pictorial volume, but here with a kind of paint-by-numbers exuberance and urgency, and the retina-searing hues of André Derain and Pierre Bonnard. There is a fey interplay of colour (transparent or solid pastel pinks, blue-greens, shrill oranges, yellows and gentle mauves) and form (soft and stylised or masking tape hard-edged), between figurative and abstract, between flatness and texture, and between form and ground. Form and ground overlap or battle for space. Colour highlights, or veils over the top (sometimes sanded back and distressed, or bleeding out onto the white frames of the paintings. Quasi-Cubist orthogonals seem to dominate the compositions, but with an all-over unity bereft of many hotspots. This is also, notably, the first time Leek has used black in such an extensive way, in Fruit Subjects IV, reminding me a little of Elvises and dusky Polynesian maidens painted on black velvet.

Bunches of grapes are a reoccurring motif and recall to mind the kind of imagery one associates with generic “European style” provincial New Zealand bistros (candles in Chianti bottles and chequered tablecloths) that were mercifully killed off in the 1980s by the Nouvelle Cuisine. Leek gives them a warm, nostalgic affection, deconstructing and stylising them into cascades of circular bubbles worthy of le Douanier Rousseau. Leek obviously takes great joy in the artlessness of subject, but really the fruit and the architectural settings alluded to in the background, are just excuses for getting the oil paint down on the board and seeing what it can do. Indeed the figurative is almost abandoned entirely in Fruit Subjects I where what I take to be a bunch of grapes is zoomed in on, magnified, cropped and stylised in such a way as to seem almost pure abstract form; an aggregation of chubby, oblate biomorphic spheroids in shades of teal, Ming blue, cerulean, celadon and Eau de Nil.

I guess I am most reminded of the late work of the American painter Alex Katz, seeing in Leek’s paintings a loud echo of Katz’s bold simplicity and heightened colour, and resonance with his stylised botanical studies of flowers, or the Ukiyo-e sensuality of his paintings of magnolia petals floating in a puddle. There are suggestions of graphic design techniques similar to, but ever so slightly skewed, the pitch queered, to those of commercial poster and sign art, just as the fruit is similar, but always slightly messy or off key, the collectable prettiness of Art Deco tourism posters or pastiches of postimpressionism.

Leek is a cool painter, but not too cool for school for the sake of being cool. Filling her quiver with the effects of the intimists, the modernists, outsider art, the banal simulacra, and the postmodern “bad painters” she has developed a process that constructs an abstract schema anchored in figuration and post-painterly technique. Leek finds her enviable tūrangawaewae in a milieu where virtually everything else has been cannibalised and recycled, if not assimilated, digested and understood.