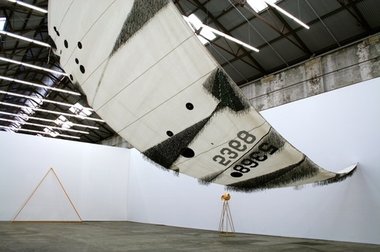 'To shoot from the hip' is to make a rash decision, without thought for the consequences; it is fast-paced yet also within stride. It is here we may think about those four words as a decision-making structure more instinctual than reckless, for it is that space between trusting one's gut and not thinking at all - a conflicting moment where time may be equal but the journey is not - where we find the potency of Brincat's work.

Shoot from the Hip is Lauren Brincat’s first solo commercial outing with Sydney heavy hitter, Anna Schwartz Gallery. After ten years of artist-run group shows in Sydney Brincat has toiled in the hard yards and is now gaining recognition for her strategic vision. Confirmed as a member of the Anna Schwartz stable, Brincat has debuted in fine, mature style with an exhibition of installation and video pieces stemming from romantic musings on the sea.

Anna Schwartz Gallery is located within the former rail yard workshop buildings as part of the Carriageworks complex in Darlington, Sydney. As such the gallery itself is a soaring white cube with ceilings of over ten metres in height. It is difficult to view a show at Anna Schwartz Gallery without first considering the overwhelming space, and I imagine it is a challenge for any artist working within it. That said, Brincat has successfully navigated the museum-style interior with the centrepiece being Southeasterlies to the Doldrums (2012), a nautical sail that hangs canopy-style across the breadth of the gallery. Southeasterlies to the Doldrums is a strong visual and conceptual piece, and importantly never feels gratuitous in scale but rather it acts as a kind of blanket or shelter from which to view the entire exhibition.

Southeasterlies to the Doldrums is inherently a romantic work as Brincat has painstakingly unraveled lovingly curated mix-tapes and affixed the tape to the sail as a tell-tale, a piece of fabric fastened to a sail to determine wind direction. The tell-tales become actual tales, narratives of love or friendship and yet in referencing the wind the work also becomes a story of the peaks and troughs of relationships. The southeasterlies of the title alludes to the blustery, change-bringing nature of those airstreams whereas the doldrums are a particular weather occurrence where no wind is present - in the doldrums a boat is trapped as the sails become defunct and one is held still by force. The static sail in the gallery space is visualised as a graph with all the giddy highs of first crushes to the immobile lows of departed sweethearts.

This conflict of pace present in Southeasterlies to the Doldrums is similar to the collaborative video work Push Me Pull You (2009), a performance Brincat produced together with her long-term partner and fellow artist, Will French. Here, the duo sit facing each other within a canoe of their own making in the bend of a muddy brown river. With Brincat at one end and French at the other they simultaneously both attempt to row forward (much like the Doctor Doolittle namesake of the title). The result is obvious - neither canoe, Brincat or French move anywhere - they generate a doldrums of their own creation and at the same time allude to the challenge of long-term relationships. Brincat has developed this use of movement over the past few years - first through the motif of the drum kit and now through her exploration of the sea. It is an interesting means of exploring change and stasis and it further illustrates her dedication to and awareness of the life-long ups and downs central to a creative life.

The idea of movement is more literally presented in the six videos present in Shoot from the hip, which are documentations of actions performed by the artist. The works further reference the sea, sometimes loosely, as in the salt-water suggestion of Egyptian Chamomile (2012) where Brincat’s mother repeatedly wipes Brincat’s eyes with chamomile teabags as a home remedy for blocked tear ducts. More direct is Dressing Down (2012) where the title is a reference to the act of re-oiling or waxing worn sails in a bid to renew their effectiveness. Here the artist repeatedly attempts to gift the shirt from her back as a presentation of ‘this is me’. The videos all contain repetitive movements, from the lapping tide in Snare the Sea (2012) to the artist’s swaying long brown hair in Sway (2012).

This concentrated activity is in stark contrast to the fixed nature of the sculptural pieces Golden Stranger (2012), Doldrums (2012) and Your Move (2012) - modernist timber constructions that reference the triangle as a structure of strength - although yet again Brincat has lured us into her symphony of changing tempo. Both Golden Stranger and Your Move as large-scale fluorescent painted frames are reminiscent of the waterway traffic signs of the harbour - signals that are beacons and also limitations. Brincat narrates our experience of the gallery with her history as musical notation - adagio here, allegro there - and we find ourselves at the mercy of the conductor.

Shoot from the hip as a title is a phrase that seems suitably out of place when contemplating Brincat’s tightly constructed works and yet we can view the title as just another consideration of movement and pace. To shoot from the hip is to make a rash decision, without thought for the consequences; it is fast-paced yet also within stride. It is here we may think about those four words as a decision-making structure more instinctual than reckless, for it is that space between trusting one’s gut and not thinking at all - a conflicting moment where time may be equal but the journey is not - where we find the potency of Brincat’s work. She reminds us that the sea is deep and wide filled with storms and calm; we just have to trust the direction we take. 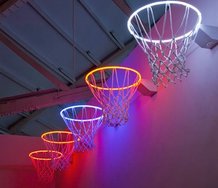 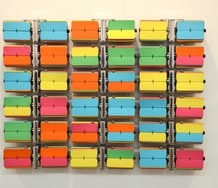 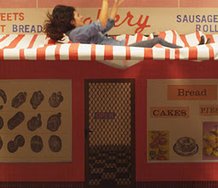 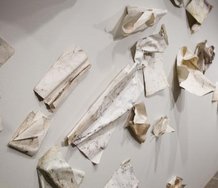