An Artwork that Multiplies 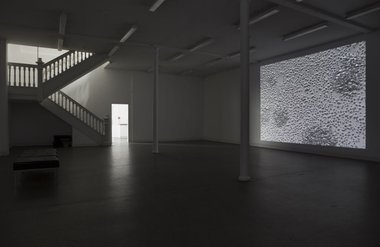 In 1962 in London Barrie Bates renamed himself as Billy Apple and trained his body to only respond to that name. Products of his body such as secretions in tissue paper also became artworks, as did bodily actions like cleaning windows or hoovering. Now, years later, and after becoming a registered trademark, he is enlisting advanced scientific research to ensure cells taken from his blood can reproduce indefinitely, in order that replicas of himself might be created long after his death.

The theme of immortalization via art that remains relevant has long been a preoccupation of artists, particularly literary ones like Shakespeare and Baudelaire or visual ones like de Chirico or Cezanne. The Immortalization of Billy Apple ® (Stage 2) follows on from the project’s Stage 1, presented briefly in Starkwhite in May 2010.

Apple’s collaborator, Craig Hilton, is a biochemist who has taught at Harvard Medical School and worked as an oncologist at the University of Massachusetts. He is also an artist who has completed a MFA at Elam, so working in both communities has enabled Hilton join forces with Apple and think about an exciting interaction between art and science.

Apple of course is the perfect artist to work with because his very existence plays with issues of identity, creation and self perpetuation. In 1962 in London Barrie Bates renamed himself as Billy Apple and trained his body to only respond to that name. Products of his body such as secretions in tissue paper also became artworks, as did bodily actions like cleaning windows or hoovering. Now, years later, and after becoming a registered trademark, he is enlisting advanced scientific research to ensure cells taken from his blood can reproduce indefinitely, in order that replicas of himself might be created long after his death.

In 2009 Apple’s B-lymphocytes were isolated from the blood and grown in tissue culture media, prevented from dying out by being virally transformed with Epstein-Barr virus. The resulting lymphoblastoid cells were housed in an environmentally controlled container and shown at Starkwhite in 2010. A purplish black and white, four and a half minute film loop was presented last month with the cellular reproduction speeded up. The translucent cells look like writhing streams of tapioca pudding, or swarming social insects, jerking images of oozing segmented blobs expanding in groups, pushing smaller clusters out of the way.

One development from all this is that Apple has deposited a quantity of cell lines with the research centre, the American Type Culture Collection cell bank, located in Manassas, Virginia. That this scientific institution has this particular name suggests a pun on Apple’s painting and magazine project from the seventies, From the Collection, where the artwork stated its owner’s existence and function, and how the work came to be created. In this new interpretation Billy Apple’s cells are now in the American Type Culture Collection as artworks that amongst other things double as research materials for fighting cancer, perpetuating genetic properties, and studying immunology.

Apple has made a few films before. Christina Barton showed four in the survey she organised at the Adam in 2009, Billy Apple: New York 1969 -1973, works made in the late sixties-early seventies. One showed Apple having a tarot card reading and getting stressed when there was confusion in the conversation with the reader over the Apple/Bates identities.

Because Apple is very much about the inseparability of body and mind (after all he changed his hair colour, and name as physical manifestations of a new self, an invented personality) this segues into the current reconfigured version of the Starkwhite show, where the film has been put on a DVD player in the rear office while Apple contemplates the left (red port) / right (green starboard) distinction found in naval vessels, and includes items like a poster from the sixties (a self-portrait with paint streaked on his cheeks), two longboards with different coloured wheels on the two sides, and a bicycle where its wheels have equivalent red and green sides.

It so happens that the jump to the new show was not planned - but it seems to me that Apple might be unconsciously dwelling on proprioception, that bodily self-awareness involving balance, position of limbs and torso, and direction while moving. Based on organs in the brain and inner ear it provides the self with a sense of corporeal location and unity, its placement in a spatial environs, but not involving senses such as sight, sound or touch. For that confident knowledge of its external body parts the left/right distinction is crucial, part of the habitation of the body, the act of dwelling in it like a house. That house in Apple’s case being renamed, rebranded, and now potentially reconstituted in the future.