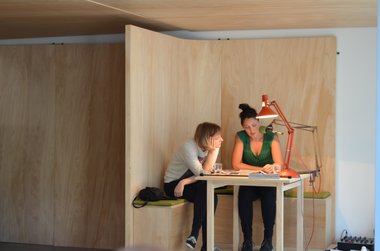 The nature of reading - silent or aloud - of course is fascinating because it is hard for us now to imagine human societies without written words. When deciphering print we seem to scan using blocks of words - jumping around - and with newspapers, starting with stories we are attracted to (via headlines or images) and quickly dropping them if we lose interest, sidetracked by something else on the same page, or distracted by reverie.

There were two art works being presented here. One was an architectural modification of part of Split Fountain’s brand new Eden Terrace space by Blaine Western and Michael Parr, a temporary fitting (The Loft Made For No One) in the main room, next to the bookcase/walls displaying S/F publications and purchasable books, and which separate it from the office and kitchen.

This elegantly austere arrangement of platform, lowered ceiling, panelled corner walls, table and benches was built to enable the functioning of a second artwork (Newspaper Reading Club Daily) by Auckland artist Fiona Connor and New Yorker Michala Paludan, where over three days invited individuals sat around the table and read aloud at set times from a selection of newspapers, while describing images and occasionally discussing the content amongst themselves, as well as the process of selection. There were always two performers, one reading, the other acting as a support and stimulus. These readings were in front of a live ‘studio’ audience and broadcast on FM radio to a local Auckland community.

Western and Parr’s two tiered platform, with its wooden planes that partially vertically enclose the area of activity, gave it focus, and helped exclude unwanted visual distractions - though not aural. Although a design work with a very specific function it really needed to have people seated (tucked into its corner) or standing around its edges to resonate as sculpture. I don’t mean relational or social elements necessarily, just human figures. It’s formally too minimal otherwise. Anti-social, withdrawn figures could work just as well as gregarious friendly ones.

Marshall McLuhan once wrote that people don’t actually read newspapers, they get into them every morning as they would a hot bath. He was talking about bodily tactility and sensual (and mental) immersion in rows of text. However in that quip he highlighted the fact that the same privacy we insist on when washing our bodies might well be applied to daily reading of printed news media - those of us who do that, instead of resorting to online methods of keeping informed where you usually get less detail and less nuanced debate. It is very revealing, and to pick out items of interest from a smorgasbord of possibilities, justify them to your audience and publicly enunciate the text without botching it with misreadings, slips of tongue and foreign language mispronunciations takes considerable skill - especially if you are not a professional broadcaster, teacher or actor. Then to also make it lively and attractive for a listening only audience, who may not know the people involved. And to have that recorded and then transcribed - to be made into a publication which may (or may not) be enthusiastically read.

The nature of reading - silent or aloud - of course is fascinating because it is hard for us now to imagine human societies without written words. When deciphering print we seem to scan using blocks of words - jumping around - and with newspapers, starting with stories we are attracted to (via headlines or images) and quickly dropping them if we lose interest, sidetracked by something else on the same page, or distracted by reverie. Most of us have four or five interests (work-related or recreational) we are passionate about and they prioritise our attention if related elements appear. We might even read them twice because their content so excites us. They dominate over other reading which is obligatory, stuff we feel we ought to know because not knowing has negative consequences (ie. not knowing what our friends are talking to us about) and brings a sense of powerlessness.

With the performance I attended on Monday afternoon, a Guardian Weekly was being poured over - an issue from early April. One woman did all the reading while the other would make casual observations and encouraging noises, but the reader was clear and confident about what she picked anyway. The Guardian is especially global in its coverage (that’s its conspicuous appeal), so we got stories such as rape victims in Morocco being forced to marry their assailants (the girl in the story committed suicide), greyhounds in Macau being killed off as soon as they stop winning races, China being the biggest market in the world for groceries, and Senegalese pirates stealing from fishermen already struggling with over fishing. It wasn’t all grim. There was also a fascinating account by Marina Warner of her childhood experiences learning English, and a surprising interview with David Byrne about a new film where he collaborates with fellow musician Will Oldham and actor Sean Penn.

These oral recitals were sometimes broken up by spontaneous asides, mutterings, and inspired ‘left-field’ digressions, such as a fleeting mention of a cat with paralysed back legs that couldn’t walk, the difficulties (even for a fluent multi-linguist) of speaking Danish, and an inspired, very brief and rough, version of the Talking Heads song This must be the place. This was the place indeed. Such improvised live presence made the event warmly entertaining, funny and thoughtful.

Thanks Matt for mentioning Jeff Jarvis' book 'Public Parts'. Some readers might be interested in Claire Bishop's penetrating examination of ...

Thanks John, good review. With all the discussion that is occurring these days around public persona and social media (Jeff ...

Thanks John, good review. With all the discussion that is occurring these days around public persona and social media (Jeff Jarvis' 'Public Parts' is one such discussion), I am struggling to decide whether a performance project delivered in public involving invited artists in the Warholian act of reading and discussing a newspaper aloud within a gallery is either pretentious or genuinely engaging. This is possibly part of the purpose as it does compare favourably with the inane crap that gets flung about in both broadcast media and social media. In this instance, the act of broadcasting the project on a radio station is what saves/legitimises it for me, in that it the individuals invited to participate were broadcast beyond the white cube environment. Nice.

Thanks Matt for mentioning Jeff Jarvis' book 'Public Parts'. Some readers might be interested in Claire Bishop's penetrating examination of social practices. Her new book 'Artificial Hells: Participatory Art and the Politics of Spectatorship' is not out yet but this lecture here gives us a look at the last chapter.
<http://www.creativetime.org/programs/archive/2011/livingasform/talks.htm#!prettyPhoto/0/>