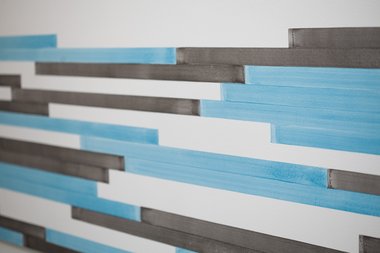 Morris has worked until he ran out of time. The result is a ‘stack' of sixteen completed layers on the one plane. With each horizontal painted mark (especially the thin blacks and blues) you can see where he begins (it's agitated from the churning, crushed bristles) and where he carefully finishes (it's clean and directional).

What is a Gallery Abstract, you might ask? This show’s title. Perhaps some sort of abstract painting beholden to its exhibiting space? But, you might argue, they always are that (there is usually some sort of visual exchange within the room). How can a ‘non-objective’ painting not be…of a gallery?

At Two Rooms Billy Apple looks back to his work in the early seventies in NYC and New Zealand and ponders the notion of ‘site specificity’ in its original sense of site as gallery space, and not site beyond the exhibiting venue’s entrance. And certainly not in the relational way (of social context) that contemporary theorists like Miwon Kwon now use it and which Apple with his The Given as an Art Political Statement tour of 1979 veered towards, despite his formalist tendencies in ‘purifying’ the exhibition venues.

For this show Apple has been continuing with Two Gallery Abstracts, a series of intricate, mainly black and white paintings based on gallery floor plans where he has checked and rechecked all the measurements, every angle, alignment and shape - every contour. He employs a hand picked technical team to make them according to his precise specifications, and only three or four colours are used, so they are clearly abstract, emphasising shape and plane.

They are also functional guides to the spaces they are first presented in, being made in pairs, one painting always the negative version of the other in terms of black or white, and initially shown at opposite ends of the room, sometimes inverted. Three pairs are currently presented by Apple at Two Rooms meaning two of them (based on the Suite and Roger Williams spaces) are not in their original historical settings. One small set is hung at an acute angle to emphasis the angle of the gallery doorway in relation to the public footpath, two contain blue rectangles that indicate manhole covers for stormwater drains, another has red squares that indicate sewerage outlets, and one (it has blue rectangles too) has yellow circles for brass observation holes. Such colours come from regulation council codes and are reproduced on the manhole covers in the spaces.

The other artist with Apple in the large downstairs gallery at Two Rooms is Simon Morris. His ‘gallery abstract’, Coloured Line, is a process driven wall work consisting of three colours (one of which is the gallery wall colour) in thin paint and rows of narrow horizontal brushmarks a metre long, each applied in a single stroke with a 50 mm brush. When Morris reaches a wall he doubles back in the direction he came from, extending the upper mark to make up the difference in length from the mark below, so together they reach one metre. He has worked until he ran out of time. The result is a ‘stack’ of sixteen completed layers on the one plane. With each horizontal painted mark (especially the thin blacks and blues) you can see where he begins (it’s agitated from the churning, crushed bristles) and where he carefully finishes (it’s clean and directional).

What is interesting is the gradual emergence overall of a vague pattern, a diagonal tilt from lower left to upper right of a lurching, spasmodic, stratified accretion - a shambling inclination that is not overly apparent, being vaguely geological but scrambled. This ‘abstract’ is on the gallery wall, and in the gallery itself.

Upstairs in the narrow gallery with the tilted roof, Christoph Dahlhausen presents a disc painting with an array of metal circles of textured or smooth hue. There are two flat wooden boxes in which sixty such discs are kept. Some of the individually coloured discs are taken out, spread out around the boxes which lean againstor are bolted to the long wall, and then organised in random formations. These are held in position by small magnets that are screwed on to the white plane and are quite thick - so the circles seem to hover or float. They are not flat on the surface. thus his New Ways to Colour the Wall casts soft shadows with each of its components. Dahlhausen also has another work with transparent purple strips attached to the downstairs windows and which serve as a kind of membrane between gallery and wider world.

Compared to Morris’s painting downstairs, New Ways.. is an abstraction that is in the gallery and over (even apart from) the walls (it goes round corners). It is an Over Gallery Abstract while Morris’ is an On Gallery Abstract. All together with Apple, three interesting variations on a theme.