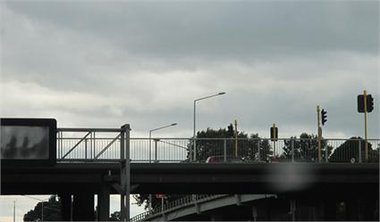 On my visit we had a very chatty Sikh taxi driver who told us about a house in the Himalayas his family had been gifted by the English and which was inhabited by spirits (his ancestors) that prevented its ownership or use by nonfamily members. I suspiciously wondered if Thompson was doing a Tino Seghal and training the cabbies to narrate this story. Did he want us to think the Epsom house was haunted and abandoned like the Mary Celeste?

This show has a very odd title, nine words jammed together to make up one: a thirty-lettered blur of despair and claustrophobia. When you are taken by taxi from the gallery to the venue it becomes evident that the taxi is a sort of boat, the ‘island’ the prosperous suburb of Epsom surrounded by the ‘sea’ of Auckland, and the ‘hole’ the house you explore - a large single story villa behind Greenlane hospital.

In the beginning I felt uncomfortable, as if I was a voyeur snooping around somebody’s home in their absence, until I awoke up to the fact that this was an artwork and I was invited to experience it. And to the realisation that it could be a readymade, but was more likely an ‘assisted’ readymade - like Yaw’s statue and plate combination that Thompson presented at RM last year. Did he import stuff into the site and construct the installation or is it genuinely found?

You are not permitted access to all the dwelling. Four bedrooms have their doors tightly shut, leaving you the hallway, sitting room, dining room, narrow kitchen, sun porch, narrow bathroom and toilet. The house ideally could be a really beautiful home but it is run down needing repairs to things like cracked lino, shattered yellowing varnish, windows with holes taped over with plastic. In general a damp ambience pervades, there’s dirt and mould in the corridor and - although most of the walls are bare - an unbelievable amount of clutter.

You have to squeeze through most of this space, or step over things, especially in the hall where there is an upright piano with stacks of old sheet music. There are mounds of cartons containing kid’s toys, broken objects, clothes and linen, next to piles of unused school exercise books, shelves jammed up with books, CDs and videos teetering on shelves, tied-up black rubbish bags, crammed cupboards, and a mantelpiece bearing images of a family and their friends where we can recognise the artist. Also some drawings and art school cubist studies, lots of religious books, no computers at all. Every horizontal surface seems heaped up with stuff, stuff and more stuff.

Some of it is much like my own place (in certain rooms) in its chaos - but there I’d argue you can detect a purposefulness: piles on tables to help writing research or artmaking. This Epsom place is dysfunctionally jammed up. The disorder is so depressing. How do you find what you need? Far too many people seem to live here.

There is a mattress in the back porch and I sensed not all the bedrooms in the house are inhabited by single sleepers. Over six people appear to be living here. There is very little room to move, though there are some seats and floor space around the dining table and armchairs by the broken television. The place is shambolic and dirty but it is not so squalid that you feel you might catch something nasty just by stepping across the carpet or breathing in the air. Close to it though.

How much of this clutter is a contrivance? Perhaps the artist has just taken the contents of the bedrooms and used them to cram up the communal living area, making the unseen private spaces empty? Thompson’s project seems to be about housing conditions and poverty, not say consumerism and the compulsive acquisition of possessions - which at first glance it might be. It is about economic hardship where people pack into a house to lower each contributor’s rent. But it is also ostensibly about exploitation - the dwelling needs fixing so it can be kept warm, clean and hygienic - and the need for the tenants to discard broken goods or objects that are never used so that the space can be enjoyed.

On my visit we had a very chatty Sikh taxi driver who told us about a house in the Himalayas his family had been gifted by the English and which was inhabited by spirits (his ancestors) that prevented its ownership or use by nonfamily members. I suspiciously wondered if Thompson was doing a Tino Sehgal and training the cabbies to narrate this story. Did he want us to think the Epsom house was haunted and abandoned like the Mary Celeste? I decided it was a coincidence and I was being ludicrously over-imaginative. Perhaps the only spectres here are penury and landlord greed? They seem to be Thompson’s focus.

I don't think Anna there is any way for the visitor to know if it is a readymade, constructed, or ...

Presenting this readymade, a family home in a suburb that is becoming more gentrified, the artist seemed to be addressing ...

Presenting this readymade, a family home in a suburb that is becoming more gentrified, the artist seemed to be addressing broader social concerns. It was as though the house and its habitants were on the verge of collapse from the pressures of society. By inviting us in to what seemed to be a world with which he had a personal connection, Thompson implicates us as voyeurs, making us overtly aware of the part we play in the system.

I don't think Anna there is any way for the visitor to know if it is a readymade, constructed, or a hybrid of both. It is an artwork and with that status they have been invited to speculate and emotionally respond. As the looking is not likely to be by any stretch of the imagination pleasurable, it doesn't make sense that the visitor be seen as voyeur. However you are probably absolutely correct that Thompson intends to highlight the implication of our bourgeois participation in the system. In that way the work is akin to the recent fortnight-long performance by Kalisolaite Uhila at Te Tuhi that spotlights homelessness.