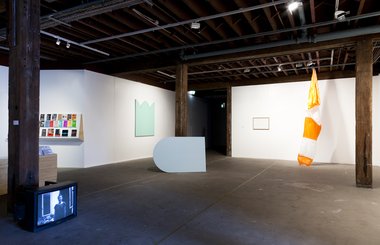 This exhibition takes the very idea of performance as a key, but at the same time partial, mode of contemporary art and tries to ascertain whether it actually holds together as a rubric for a certain kind of post-medium art practice.

It is a measure of the highly fluid role of performance as a mode of contemporary art that galleries are increasingly interested in placing live work front and centre in programming schedules. Where it has been largely consigned to public programmes and special events as a kind of high-cred ‘flavouring’, it is increasingly being seen by curators as a mode worthy of exhibition in its own right. While the days of being slipped a fifty to perform in the room with the least amount of art in the ‘main exhibition’ on a Monday night, or, to squeeze in something as ambitious as possible between two day exhibition changeovers may not entirely be a thing of the past, performance is no longer simply the gap-filler it has so often been. For artists working in performance this represents both great opportunities to finally eat at the big table, but at the same time it opens up very particular challenges. How, for instance, might that live Monday night experience translate into a six week show all the while keeping performance and its key modality liveness as the very crux of the work.

The question of how performance can be forced, finessed, or easily imbued into the exhibition format is central to Nothing Like Performance. Curator Blair French has chosen six artists from Australia and New Zealand whose artwork in highly diverse ways utilises performative strategies as one critical tactic embedded within a mixed economy of other media. While each work to some degree interrogates an aspect of performativity whether it be documentation of a live event, or objects made in anticipation of a future live event, it is not always self-evident that performance is the definitive method of operation here. Rather what is captured are the myriad ways in which performance - or particular aspects of it - has been elided into discursive and nuanced post-medium practices where materiality and context play equally crucial roles.

While it is fair to claim as French does that the work among other things produces, anticipates and defers a state of live physical action, what seems to be at stake here is the value of foregrounding performance as a useful - or indeed accurate - way of framing the art. The work Arch and Triptych by Yiorgos Zafiriou is a case in point. Consisting of two marble monochrome paintings, both objects reference original gothic and Renaissance artworks in Berlin and it is claimed perform as ‘stand-ins for the originals’. While a meditation on ‘the complexities of Hellenic culture’ and identity in relation to the Greek diaspora, the works themselves say very little about performance beyond the knowledge that Zafiriou is known for having an extensive performance practice.

Sydney artist Will French is also represented by a range of objects each of which function as traces of performative actions. The forms, which include wax pigment (lipstick) with the letters WOW (Wild Oscar Wilde) rubbed onto paper and a photograph that captures the words this will never last fading over time on a street in France, are highly compelling and evocative meditations on time and place (travel) but their inherent charisma pushes the performative origins into a provisional status less significant or recoverable than the traces themselves. A similar effect takes place in reverse with Matthew Bradley’s hilariously reconfigured motorbike Monsterbike that we see in a state of fabrication with tools and a workbench in the gallery before it is tested at speed in the Australian desert. This work promises the fantasy of performance as a potential future event.

Lauren Brincat evokes a pleasingly melancholic presence in her video works This Time Tomorrow and Goodmorning, Goodnight. The later sees her continually walk in front of a setup camera to simply utter ‘good morning’ or ‘good night’ depending on the time of day. What is initially curious is that good morning is uttered in the evening and vice versa in the morning. Only after reading about the work is it apparent the artist has made the work while overseas and is converting northern hemisphere day and night to make her pronouncements match the time difference in the southern hemisphere. It is a simple but profound examination of time, distance and the disorientation of being away from home.

It is in the careful layering of object making and liveness highlighted in the work of Paul Donald and Brown Council that one gets the sense there really is nothing like performance. Donald, a New Zealander currently based in Montreal, has set himself the task of building a bridge from nowhere to nowhere across the front gallery at Artspace. With the requisite DIY hardware and timber set up in the space, we watch him measure, cut and then assemble the components over the course of the first week of the exhibition. Assorted monitors are set up on the floor that capture the labour over time allowing us to gauge how the structure has come together or, in one profound moment, come apart.

There is a nice tension between the persona of the artist as a generic builder slowly but diligently doing his interior renovation in the gallery, and the absurdity/whimsy of making a bridge without any obvious function or sense of reason. The faint echo of the reality television renovation phenomenon seems to be at play, a counterpoint to the idea that we are a generation of assemblers of IKEA furniture rather than hands-on fabricators. By extending the history of making as a key performative activity (Pollock, Alys, etc) into ideas of everyday labour and absurdity, Donald highlights how making objects in tandem with live experience, offers a powerful hybrid language of engagement that is potentially greater than performance and sculpture/installation might be as individual disciplines.

Brown Council are fast becoming the darlings of Australian performance having shown regularly there and increasingly internationally in the past few years. A collaborative group featuring Sydney-based artists Fran Barrett, Kate Blackmore, Kelly Doley and Diana Smith, Brown Council are known for their acerbic and sometimes provocative projects that often use humour to dissect the possibilities of performance across so-called high (art) and low (popular theatre) categories. Here they have developed a homage to Barbara Cleveland, a little known but ‘critically important’ performance artist from the 80s who died in veritable obscurity. The work is in three acts, a thrice-performed duration performance where the artists stand with their eyes closed silently contemplating Cleveland for two hours, a video of the four artists appearing one after the other wearing the same wig speculating on supposedly key questions in relation to performance practice, and a complimentary, and it should be said ugly, white Barbara Cleveland t-shirt.

The work is trying to do quite a lot aesthetically and conceptually in engaging with how performance history is constructed and canonised and why we should care about the little known Cleveland. Maybe it’s because it is so immediately apparent that Cleveland is fictitious and that the artists are demonstrably over-hyping her legacy that it feels contrived in a less than convincing way. There is, it should be said, a kind of lampooning accuracy to the way in which Brown Council skewer the cliché of the transgressive artist who is critically resuscitated after death, but it’s hard to get past the knowing humour and slightly clunky delivery to really grapple with how historical narratives are constructed and re-presented.

Ultimately this exhibition takes the very idea of performance as a key, but at the same time partial, mode of contemporary art and tries to ascertain whether it actually holds together as a rubric for a certain kind of post-medium art practice. The evidence here is that it might be a tenuous, if compelling, connection that like Donald’s bridge could very easily collapse in a heap at any moment. Yet as the various splinters are still engaging, the knowingly slippery curatorial provocation that there really is nothing like performance challenges us to think through and question the ever evolving boundaries of live art practice and whether what we are experiencing sits comfortably under the stretched banner of performance.