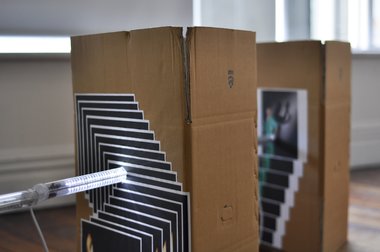 This is, predictably, a commentary on our empty, overcaffeinated bling culture, full of avatars and pixelated celebrities. The most tangible link to the non-digital world is as tenuous a thing as a youtube clip of Cher blinking. If you're looking for contemporary pop art, this is it.

Contemporary music offers digital kaleidoscopes of compressed, distorted, mashed and munted up audio. Elements are sliced, diced and piled up upon each other to create badass sound environments.

The visual arts has been far more timid about creating maelstroms from digital sources, even when the tools to enable such detailed home-crafting have also been readily available. The institutions, at least, have preferred to push a counterpoint to contemporary culture’s chaos and noise signifying nothing - visual spareness and restraint signifying a great deal.

James Bowen’s Force-Morph offers the closest to a contemporary digital art musical crossover I’ve seen locally. It’s a veritable digital disco, with a pulsating video work at its centre, several chaotic digital prints and some cardboard boxes with repeated found images pasted onto them, passed through by a flashing strobe-like fluorescent tube.

The whole work is pumping, as they say - fused together by an engagement with found figurative movement, and an oversaturation, repetition and corruption of colour and shape. Plus some violently tinny sounds coming out of cheap Logitech speakers. The work’s central organizing device is the computer desktop, its screensavers, pop up windows and folders. The punk action of the work is that of ripping - both in its traditional and contemporary definitions.

It is, predictably, a commentary on our empty, overcaffeinated bling culture, full of avatars and pixelated celebrities. The most tangible link to the non-digital world is as tenuous a thing as a youtube clip of Cher blinking. If you’re looking for contemporary pop art, this is it.

Yet Bowen (a recent Massey masters grad) throws up enough high altar nods to the church or temple visually to set the work’s ambit wider. This includes a few spinning abstract logos, and vanitas-like pieces of animation of angels boogying, and pretty, funky dancers reduced to skeletons. The work nods to those old religious morality tales about death and desire.

“It may not be the dark ages,” this work seems to glitter as it pumps up the volume, “but all the light and noise of contemporary media sure is meaningless and blinding”. ‘No name, no slogan’ chants the churning, looping soundtrack, and with a delirious dance of folders on a Apple desktop the video starts to feel like it might resemble the stomping hooven feet of the devil. With sprinklings of digital fairy dust over the heads of celebrities, encouraging us to ignore the pickle we’re in.

As a contemporary take on the surreal it’s all rather Dali-esque. Assaulting yet intoxicating. Sex and death entwined in an endlessly repeating, evermore corrupting file. I’m reminded of filmmaker Kenneth Anger’s disturbing mix of surrealism and the occult.

The central work is the video, but sculpture and prints provide able side-altar installational support. I like the opening out of the cardboard boxes here as a chain of empty bottomless containers. Each features an overlaid tiling of repeated images on A4. Each features a kind of moronic human dance - two women, for example, in crash helmets pitting their heads together like a public timepiece. All of these images, cheaply colour printed, are sourced from stock libraries like Getty images (the current visual corrupters of the NZ Listener) and Thinkstock.

The large prints are far less successful. The ideas still feel like they’re in process. But I like where Bowen’s going with his dance of jpeg labeled corrupted images against Steve Jobs’ heavenly galactic screensaver.

In using what he describes as ‘poor images’, as well as poor materials, Bowen draws attention to the hand-me-down corrupted images those without material wealth are now faced to consume. The whirlpool of crap that spins around our heads, like that plastic garbage patch in the middle of the Pacific Ocean.

There’s a truckload of visual art out there playing dynamically with the tension between the digital and the handmade, but most of it strikes me as decorative. Bowen’s Force-Morph doesn’t sit quietly on the wall while you’re eating dinner. It’s all about unsettling the stomach, making us consider where that shit we just ate came from.